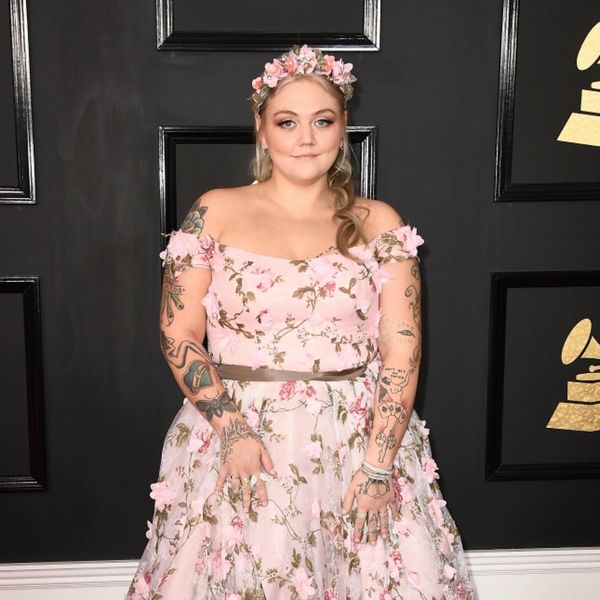 Just a few short months ago, “Ex’s and Oh’s” singer Elle King announced that her boyfriend Andrew “Fergie” Ferguson proposed to her in a super romantic boat cruise around San Francisco harbor. Their whirlwind romance seemed picture perfect (and she had an entire Instagram account to share their romance), but out of the blue this past weekend, the singer shared a video to her IG account that is telling a different story — one that’s got her becoming a runaway bride (and maybe had her ghosting her groom).

Skipped out on my wedding. I married Rock&Roll instead 🤘🏻so I hopped on tour with 🤘🏻🤘🏻🤘🏻EAGLES OF FUCKING DEATH METAL🤘🏻🤘🏻🤘🏻

In a behind-the-scenes video, the singer announced Sunday that she “skipped out” on her wedding and “married Rock&Roll instead.” Using a bunch of metal horn emoji, the singer says she’s going out on tour with the heavy metal super group The Eagles of Death Metal.

Just last month, the singer appeared on TLC’s Say Yes to the Dress, having chosen her wedding gown after it brought her to tears. The singer, whose dad is comedian Rob Schneider (yes, that guy!), hasn’t given any further details about what caused her to skip out on her nuptials.

The couple’s original engagement happened only two short weeks after they started dating, which was only about a year ago. Since the concert video post, King’s gone right back to her regular IG antics, and has yet to publicly comment on either her relationship with Ferguson or why their wedding didn’t happen.

What was the most surprising way you have announced a breakup? Tell us @BritandCo!

Kat Armstrong
Kat has been a writer, social media maven and mom for longer than she's willing to admit. She's also spent time in front of and behind the camera, interviewing celebs, politicians and acting as a producer for fashion and artistic photography shoots. When she isn't writing for various orgs and publications, she's hanging with her kids, husband and French Bulldog, Peter, in Toronto, Canada.
Celebrity Wedding
Celebrity News
Celebrity Wedding
More From Celebrity News