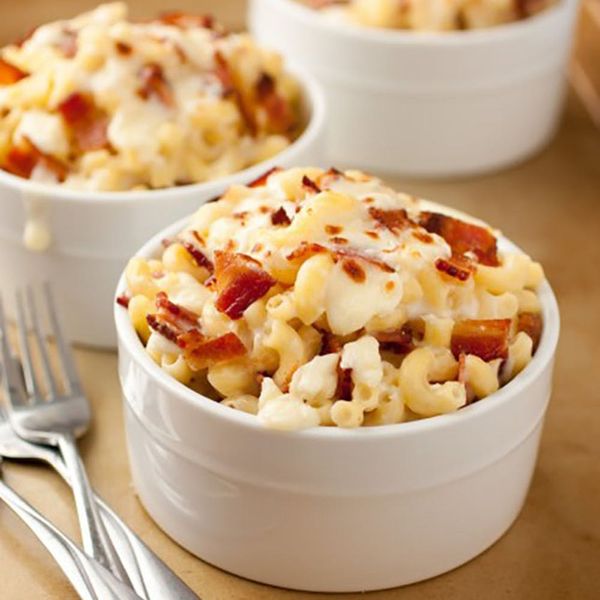 Every once in a while, a girl’s gotta chow down. Pint of Ben & Jerry’s and binge watch? Yep. Chocolate chip cookies straight out of the oven? Obviously. Rosé with the girls? It might not be food, but you know it’s goin’ down. Then there’s the holy grail, the winningest calorie splurge of them all: bacon. Crispy, crumbly and savory, the fatty pork product found so frequently beside two eggs and hash browns is arguably the root of the word nom.

1. Makin’ Bacon ($24): First off, how insane is the idea of making your own bacon? You can cook it or smoke it or cure it in maple syrup. Marinate the meat beforehand or stick to the eternally delicious flavors inherent in pork. The best part? This bacon won’t shrivel or shrink like commercial bacon, so get ready to start cooking.

2. Bacon Feta Macaroni and Cheese: Everyone knows bacon and mac ‘n’ cheese are fortunate plate-fellows, so this recipe isn’t groundbreaking in design. Taste-wise though, you’ll just have to make it to understand. (via Cooking Classy)

3. Mac and Cheese Grilled Cheese With Bacon: It sounds like a mouthful, because it is a mouthful. Call it cheese-ception, and then rejoice that there’s bacon in the mix. (via She Knows)

4. Savory Cheddar Waffle BLT With Egg: Oh, the humble BLT: How it has satisfied grumbling stomachs for decades. We think the classic sandwich made with your own personal brand of bacon sounds pretty amazing. We understand if you take it to the next level with waffles for bread and a fried egg for good measure. (via Chow)

5. Bacon Jalapeño Poppers: Give your hand-cured bacon a kick with this easy recipe. Stuff spicy peppers with your favorite indulgent fillings, wrap ’em like pigs in a blanket and bake. We’re drooling already. (via Roaming Hunger)

6. Candied Maple Bacon Donuts: Once Portland’s Voodoo Doughnuts turned bacon from a niche confection topping to a sought-after treat, this sweet and savory combo started popping up the world over. One of those places could be your own kitchen. (via The Novice Chef)

7. French Toast Bacon Cupcake: Toss a hearty helping of your specialty bacon into the bowl when you make these breakfast-inspired baked goods. You won’t be sorry, we promise. (via Pass the Sushi)

8. Bacon Pancakes: Give your traditional morning stack some extra altitude, along with some savory attitude. Salty and sweet never looked so yummy. (via Martha Stewart)

9. Maple Bacon Bourbon Jam: No kidding, you’ll want to spread this on everything. And who wouldn’t with a winning combo of pure maple syrup, booze and bacon made from scratch? (via Set the Table)

10. Bacon Hot Dog Bun: Low-carb diet? No problem. Throw caution to the wind and put your weaving skills to the test for this crazy woven hot-dog holder. (via Grillocracy)

Got a favorite bacon recipe that you want to try with home-cured bacon? Tell us on Twitter @BritandCo or show us the results of your kitchen adventures with the hashtag #britstagram.