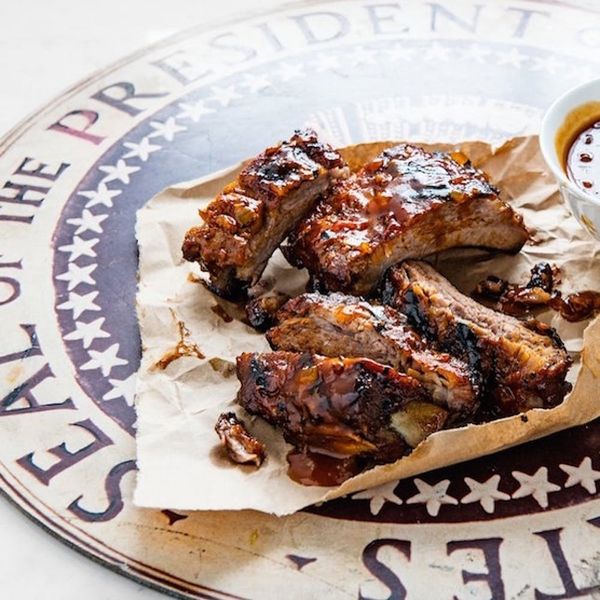 We love House of Cards more than sharks love blood, and since it comes back to Netflix on February 27, we’ve been busy planning a viewing party with some of our closest compatriots. We found everything you need, from party games and food to cocktails and decorations, to transport yourself to Washington, DC — no snow required. Just make sure everyone stays away from the Metro. If you haven’t watched yet, be warned: There are spoilers ahead!

3. In Underwood We Trust Mug ($14): Keep your Netflix binge going well into the night with mugs of coffee. Not that you’ll be able to sleep after watching everything go down.

4. Underwood 2016 Bumper Sticker ($7): What’s a party without good favors? Besides, you’ll want to show that you support Frank. Who knows what he’d do to anyone who supports his opponents?

5. Dress Like Claire Underwood: As the hostess, you’ll want to be as polished and flawless as Claire would be when having company over. A chic pair of glasses and some sleek black power heels should do just the trick. (via Tatiana’s Delights)

6. Freddy’s BBQ Joint T-Shirt ($17): Or you could go casual and show your support for the best BBQ around.

7. Paperless Post Invite: Send digital invites to your supporters that hint at the inaugural ball that we hope (fingers crossed) we get to see in the first episode. That would be a doozy.

9. Deck of Playing Cards ($20): In between episodes, gather everyone around for a quick card game. Or don’t, since Frank doesn’t approve of such useless things. In that case, you can use them to decorate.

10. Playing Card Decorations: Keep the party festive with these easy card decorations, using either a regular pack of playing cards or the House of Cards-themed pack above. If anyone objects to the decor, tell them “democracy is overrated.” (via Indulge Party Blog)

11. Patriotic Cupcakes: Serve these cupcakes to your guests, and start the debate over whether or not Frank Underwood is a patriotic man. We vote “not really.” (via Celebrations)

12. Underhanded Underwood Cocktail: This cocktail is a blend of gin, herbal bitters and dry vermouth. Sounds to us like the kind of drink Claire would make herself after a long day. (via VH1)

13. No Patience Cocktail: Blending together the flavors of bourbon, bacon and barbecue, this cocktail sounds like one the (new) president would approve of. And let’s be real: There aren’t many things he approves of. (via Great Ideas)

What do you think Frank’s first act as President will be? Let us know in the comments!

Amanda DiGiondomenico
Amanda is a freelance writer and graphic designer who blogs about living a stylishly nerdy life at The Spendicate. A lifelong resident of Baltimore, MD, Amanda is an art school dropout, who managed to earn a masters degree in nonfiction writing. On the weekends, she's an expert guacamole maker, a novice jogger and an intermediate yogini.
Cupcake Recipes
Cocktails
Cupcake Recipes Netflix
The Conversation
Reviews:
More From Cocktails