Here’s How Your Binge-Watching Habits Are Impacting Your Sleep 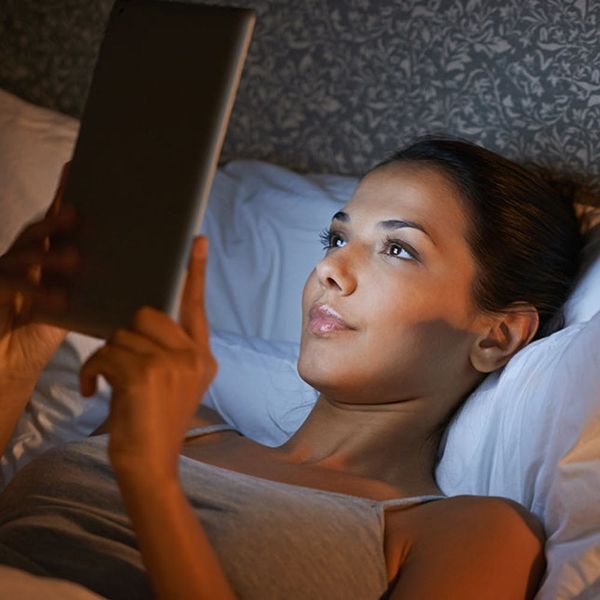 If your pre-sleep routine involves a bedtime story courtesy of a streaming service like Netflix or Hulu, a new survey says you’re in good company. Conducted by Tuck.com, a website devoted to improving your sleep habits, the survey of over 1,300 American adults found that 85 percent had watched a show on a streaming service from the comfort of their bed. However, over a third admitted that choosing to binge the latest episodes of a show instead of sticking to an early bedtime was interfering with their ability to get enough sleep.

Is choosing streaming over dreaming really that bad for us? Here’s what else the survey found out about our streaming and our sleep — and the possible health repercussions. Stay tuned.

1. It’s not just young people. Streaming shows in bed was most common among 18- to 24-year-olds, with 92.7 percent admitting to bringing their devices to the duvet. However, before the over-65 set starts feeling superior, 58.1 percent of them have done it too! In fact, the majority of every age group said they watched shows from bed, and the age group most likely to be watching more than three hours a night were the 45- to 54-year-olds. So no lectures, Mom!

2. Nearly half had stayed up all night to watch a show. They might not admit it to their bosses, but the survey found that 45.1 percent of participants had pulled an all-nighter to watch a show in the past year. The culprits were spread fairly evenly throughout people ages 18 to 54, and men were just slightly more likely to do so than women. But is trading one night of sleep to finish a season really so bad? Bill Fish, a certified sleep science coach who co-founded Tuck.com and co-wrote the survey, says it could affect you for up to a week. “Binging a show all night is not going to be a problem for your health long term, but going a night with no sleep is a shock to the body,” he cautions. “It alters our circadian rhythm, our internal clock that tells us when to rest and when to wake up, and it could take upwards of a week to get back to normal.” Besides, the odds are that it’s not a one-off: Over 55 percent of those who pulled all-nighters had done so multiple times.

3. We know it’s affecting our sleep. Over 35 percent of people surveyed said that their just-one-more-episode habit was affecting the amount of sleep they got. Only 8.7 percent said they felt like they always got enough sleep, and just 47.5 percent actually got the recommended seven to eight hours or more on weeknights. On top of that, those aged 18 to 34 were most likely to admit that not only were they sacrificing sleep for shows, but watching those shows actually made it harder to fall asleep. Fish says that while people often use streaming services as a sleep aid, they can actually keep us awake. “If the show has you so attached that you want to stay up watching it, then your mind is probably racing, your emotions are heightened, and your adrenaline is raised,” he notes. “Our bodies aren’t quick to ‘come down’ after something like that.” He suggests putting away your electronics at least 30 minutes before you want to sleep, giving your brain a chance to relax without having to worry about whether your favorite character will survive the latest plot twist.

4. The effect of blue light is cumulative. It’s not just dramatic plot lines that can overstimulate your brain. One of the reasons streaming from bed is so disruptive to sleep is the blue light emitted by screens, which suppresses melatonin, the hormone that makes you drowsy. Fish explains, “Prolonged streaming in bed from your TV, tablet, or phone tells your brain that the sun is still up, which goes against what our circadian rhythm is telling us. The more we stream in bed, the more our brain is confused into staying awake instead of falling asleep.” He advises enabling the red light filter on your phone, or downloading an app that does it for you, to minimize the impact on your brain at bedtime.

5. Find the balance between Netflix and naps. Before you tearfully unsubscribe from your streaming accounts, it doesn’t have to be sleep versus streaming! Fish says you can have both — but prioritize your body’s needs. “My wife and I do stream shows in bed sometimes, especially Netflix docuseries and Game of Thrones, but we set boundaries. We don’t watch TV in bed after 10pm, and never more than one hour. We want to associate bed with sleeping, so when we lie down our bodies know it’s time to sleep. We always get at least seven hours of quality sleep, because we know that we’ll feel like garbage the next day if we don’t,” he says. “Making a Murderer was captivating, but I also have a job, and would prefer to not be nodding off at my desk!”

It’s not about depriving yourself of your favorite shows, it’s about balance. No one says you can’t watch Orange Is the New Black, but if it’s 11pm and you have an early start the next morning, maybe resist the urge to find out what happens next until another night.

What show is keeping you up past bedtime? Let us know @BritandCo.