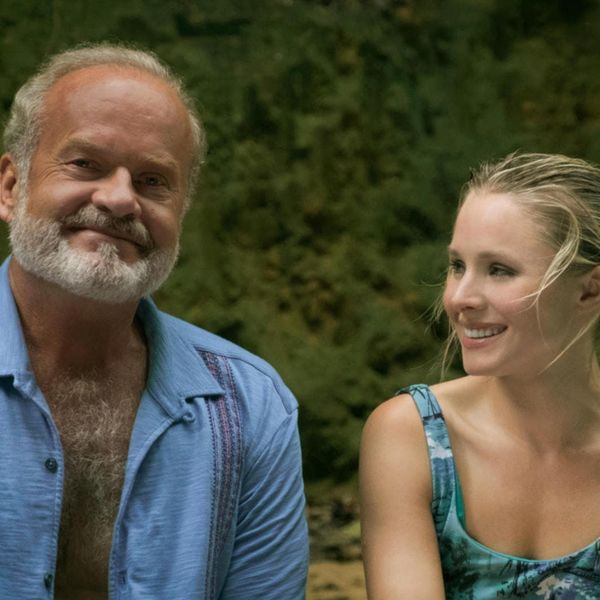 Look, we love beach days as much as the next person, but sometimes you just need to hang out in an air-conditioned room and watch movies. (Netflix and *literally* chill.) That's why the streaming service came up with a list of double features starring some of your favorite actors — Nicole Kidman, Kristen Bell, Anne Hathaway, Glen Powell, Leonardo DiCaprio, etc. Click through to see nine pairs of films and TV shows to help you beat the August heat. (Photos courtesy of Netflix)
Anne Hathaway in The Princess Diaries and The Princess Diaries 2: Royal Engagement: The Oscar winner got her big break as Mia Thermopolis in Disney's 2001 movie about an awkward teen who discovers she's the princess of a remote European country. Look for a then-unknown Chris Pine in the 2004 sequel. (Photos courtesy of Netflix)
Kristen Bell in Forgetting Sarah Marshall and Like Father: Modern rom-coms don't get much funnier than 2008's Forgetting Sarah Marshall, which starred Bell (as the titular Marshall) opposite Jason Segel, Mila Kunis, and Russell Brand. As of August 3, you can also watch the Veronica Mars actress in the Netflix original movie Like Father, about a workaholic ad exec who takes her estranged father on her honeymoon after her fiancé leaves her at the altar. (Photos courtesy of Netflix)
Glen Powell in Set It Up and The Guernsey Literary and Potato Peel Pie Society: Viewers swooned over Powell in Netflix's original rom-com Set It Up, which debuted earlier this year and costarred Zoey Deutch, Taye Diggs, and Lucy Liu. And as of August 10, you can catch him in another Netflix original, The Guernsey Literary and Potato Peel Pie Society, which is based on the best-selling book of the same name. Lily James and Michiel Huisman also star. (Photos courtesy of Netflix)
Julia Roberts in Steel Magnolias and Secret in Their Eyes: Have some Kleenex handy for the first part of this double feature. The 1989 tearjerker starred Roberts, Sally Field, Dolly Parton, Shirley MacLaine, Daryl Hannah, and Olympia Dukakis as women bonded by tragedy in a small Southern town. After you've bawled your eyes out, catch Roberts, Nicole Kidman, and Chiwetel Ejiofor in the 2015 psychological thriller Secret in Their Eyes. (Photos courtesy of Netflix)
Leonardo DiCaprio in The Aviator and The Departed: DiCaprio earned an Oscar nomination for his turn as Howard Hughes in 2004's The Aviator, which arrived on Netflix on August 1. He earned a Golden Globe nomination for 2006's The Departed, which costarred Mark Wahlberg, Matt Damon, Jack Nicholson, and Martin Sheen, among others. (Photos courtesy of Netflix)
Nicole Kidman and Daniel Craig in The Golden Compass and The Invasion: Kidman and Craig costarred in two movies, both from 2007, that are now on Netflix. In The Golden Compass, based on Philip Pullman's book Northern Lights, they played mysterious characters in a parallel universe ruled by a church called the Magisterium. And in The Invasion, they played doctors investigating an organism that renders people emotionless. (Photos courtesy of Netflix)
Steve Carell in Evan Almighty and Get Smart: The Office star reprised his Bruce Almighty character in the movie's 2007 sequel, which hits Netflix on August 16. You can also see him as a wannabe spy in 2008's Get Smart, based on the '60s TV series of the same name. Anne Hathaway, Dwayne "The Rock" Johnson, and Alan Arkin costar. (Photos courtesy of Netflix)
Jason Bateman in The Gift and Ozark: The Arrested Development star appeared with Rebecca Hall and Joel Edgerton in the 2015 horror thriller The Gift, and he stars with Laura Linney in the Netflix original series Ozark. Season 2 hits the streaming service on August 31. (Photos courtesy of Netflix)
Clint Eastwood in Million Dollar Baby and Gran Torino: Eastwood pulled double duty as director and actor in both 2004's boxing drama Million Dollar Baby — which won four Oscars — and 2008's controversial Gran Torino. (Photos courtesy of Netflix)
Allison Takeda
Netflix
Streaming
Netflix
More From Streaming