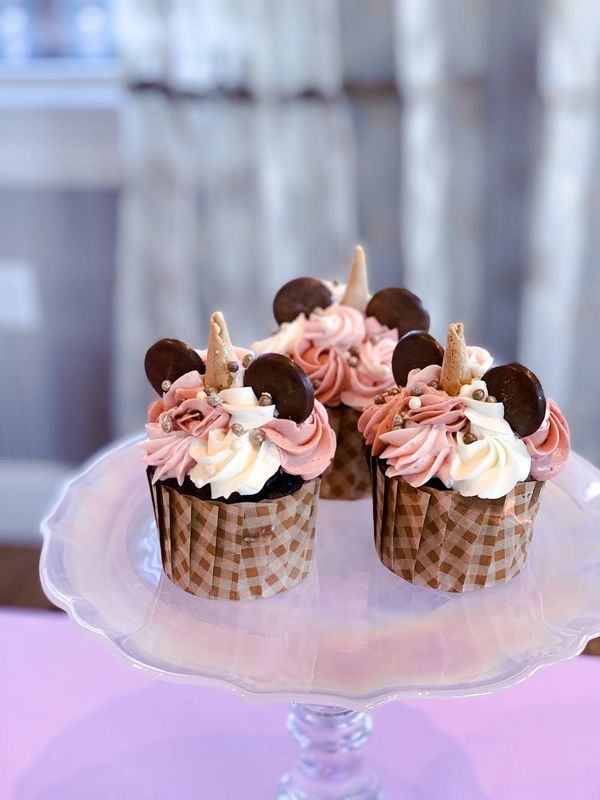 One of the most magical parts of experiencing a Walt Disney resort is the food. Their culinary and confectionery creations exceed even our wildest dreams, and we’d be remiss to not put the spotlight on the beloved Disney cupcakes.

Since it can be tough to pack a delicately-frosted cupcake in your suitcase, we wanted to learn how we could create this perfectly-iced magic from our own kitchen. Luckily we scored some time with veteran Disney Pastry Chef Heather at Sebastian’s Bistro at the Caribbean Beach Resort at Walt Disney World.

Ahead are our tips (and Chef Heather’s!) for making your cupcakes as breathtaking as the ones you see at the House of Mouse. Our favorite? The Briar Rose Gold Unicorn Cupcake (that’s a mouthful… of deliciousness!).

Have the Right Supplies

There are several tools a Disney pastry chef has in their arsenal to add the pixie dust to an otherwise ordinary cupcake. Chief among them:

You’ll also want the basics . . . think, solid piping bags (though a Ziploc will do in a pinch!), piping tips, a coring knife or cupcake corer, and cupcake liners. You can get most of this (if not all of it) on Amazon, or at a local craft or baking store.

Essential to all Disney cupcakes is the filling. Because why wouldn’t you want a surprise when you bite into this edible art? “Every single [Disney cupcake] is filled with something,” says Chef Heather.

You can use the same buttercream from your decorative icing (this is how the Briar Rose Gold cupcake is made — filled with the same strawberry buttercream from the top), or you can choose to fill it with a ganache, jam, or something else you have up your sleeve.

Chef Heather created a special cupcake for Mother’s Day called the “Peace & Quiet” which was filled with chocolate-cabernet ganache and topped with an aqua blue icing to create a bubble bath setting (with a wine glass, of course!). FYI, you can grab this one IRL at Walt Disney World from May 9 to May 13!

Don’t Be Intimidated by Piping

While it may look complicated, the swirled dollops of frosting (rosettes) are actually quite simple to create. All you need is a floral piping tip, and the right technique.

According to Chef Heather, the most common mistake is holding the piping bag too high up. Her fix? Use smaller portions of frosting at a time in your bag, and choke down a little bit to have more control over your design and where your icing’s going.

Then get ready to frost. The tri-color aesthetic on the Briar Rose Gold Unicorn Cupcake was simple: one had no strawberry (vanilla buttercream), one had a little, and one had… well, more! You can also add a touch of food coloring to intensify the pink color. Then alternate your rosettes to create a millennial pink menagerie.

Be Prepared to Get Messy

Part of creating these beautiful cupcakes is coming to terms with your kitchen becoming a mess of glitter, crisp pearls, frosting, and more.

When creating the Briar Rose Gold Unicorn cupcake, you’ll have to use a lot of shimmer on the chocolate discs (for the Minnie ears), and sprinkle iridescent pearls atop your mountain of buttercream.

Making these behind the scenes with Chef Heather, you can bet that we were coated in shimmer dust by the time we were done.

Et voila! You’re a confectionery mastermind now! We know we don’t have to tell you twice, but don’t forget to take a lot of pictures for the ‘gram. In your Briar Rose Gold ears if you’re feeling fancy.

RELATED: Sprinkles’ Latest Flavors Give You Permission to Eat Cupcakes for Breakfast