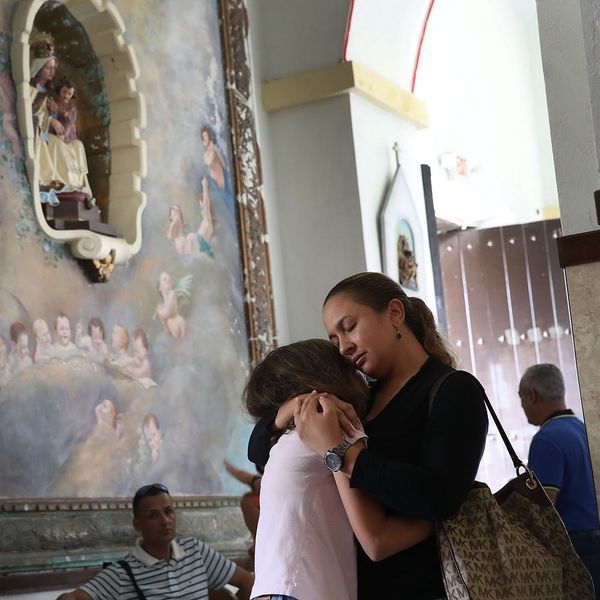 Thursday marks one year since Hurricane Maria hit Puerto Rico, devastating much of the island and leaving residents stranded without power, drinkable water, food, and other basic necessities. The Trump administration’s inadequate response to the disaster contributed to the deaths of nearly 3,000 people, and continues to draw sharp criticism from Puerto Ricans and human rights activists. Now, a new report argues that the US government’s failure to involve local women in disaster relief processes put women and girls at a higher risk of violence.

The report, “Hurricane Maria’s Survivors: Women’s Safety Was Not Prioritized,” comes from Refugees International, a non-profit organization that provides support to displaced people around the world. Refugees International representatives conducted interviews with local women’s rights groups in Puerto Rico, women leaders of the community, government officials, and Puerto Ricans affected by the hurricane to determine whether or not women’s needs were being met in the recovery.

Francisca Vigaud-Walsh, author of the report and senior advocate for women and girls at Refugees International, writes that “women’s specific protection risks, such as [gender-based violence], were not prioritized in disaster preparedness planning, during the emergency response to the disaster, nor in the recovery phase.” Typically, humanitarian relief efforts include steps to mitigate the harms of gender-based violence and other risks facing women and girls, but this has not been true of government efforts in Puerto Rico post-Maria.

Humanitarian relief efforts involve bringing in people with a range of expertise: from food distribution and shelter construction to logistics and telecommunications. Additionally, Vigaud-Walsh tells Brit + Co that experts in protection are usually brought on board. These people specialize in things like family tracing and reunification, addressing trauma in children, and mitigating gender-based violence.

But “protection actors,” as they’re called, were not present or used effectively in Puerto Rico, according to the report. Typically, Vigaud-Walsh says that women in local communities play a vital role in planning even the most basic elements of recovery, including what to do about bathrooms. “In a traditional humanitarian response, the basics start with speaking to women about where to put toilets,” Vigaud-Walsh says. It’s vital to coordinate with women locally on these matters so that important infrastructure like temporary toilets are not constructed in areas where women are at higher risk of being assaulted.

But in Puerto Rico, Vigaud-Walsh says that local women’s groups were not consulted. “There was no plan to work with women’s organizations and domestic violence shelters, and government contractors were not bringing in local experts to help,” she tells us.

Even before the hurricane hit, women’s safety was not taken into proper consideration, particularly in regards to temporary shelters. “Widely accepted practices for mitigating [gender] related risks include mechanisms for screening entrants to evaluate whether there are perpetrators, providing lighting, gender-segregated toilets, and showers with locks, and separate quarters for separated and unaccompanied minors,” according to the report. But these steps just didn’t happen ahead of Maria.

Women’s rights groups and domestic violence shelters were not consulted, and as a result, the report found incidents of violence against women in some of these shelters, which were staffed with “overwhelmed” workers who were given little training.

In order to prevent future disastrous recovery efforts, Vigaud-Walsh says new policies are needed to ensure everyone’s needs are addressed in the wake of hurricanes. If you’re not taking stock of lessons learned from local women’s rights organizations,” she says, “then we’re going to be exactly where we are today after the next hurricane.”

What do you think? Tell us on Twitter@BritandCo.

Elizabeth King
Elizabeth King is a politics, history, and culture writer based in the Twin Cities. She is generally pretty cranky but still enjoys traveling, music from the early 2000's, and plotting the resistance. Feel free to say hi on Twitter at @ekingc or check out some of her work at www.elizabethcking.com.
Controversy
Current Events
Controversy Environment Politics
More From Current Events