I Tried Meditating While Running + This Crazy Thing Happened 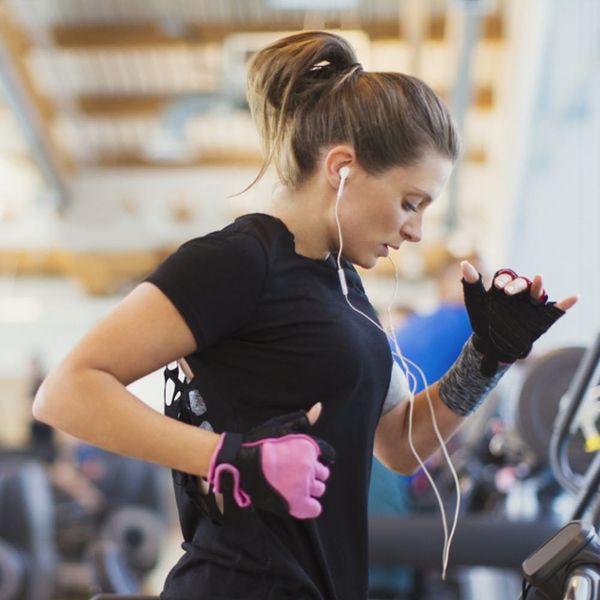 No one said getting fit in 2017 was going to be easy… but even just a week into the new year, I already felt exhausted. Even though I’d set myself up for success by splurging on cute new pieces for my workout wardrobe and reading ALL the trainer’s tricks for exercise motivation I could find, I was still finding it hella difficult to make cardio a priority.

Then I read Gina Tomaine’s amazing article in Runner’s World. In this life-changing editorial, Gina describes how meditating while running can tangibly improve your workout. That’s right: Getting your Zen on during a sweaty treadmill sesh can actually help you achieve your 2017 fitness goals!

So what happened when I tried meditating while running? I’d be lying if I said it didn’t seem a little strange at first. Closing my eyes while running felt weird, and I kept having to force myself to focus on what the instructor was saying instead of my burning hamstrings.

But on the second day of medi-running (yes, I nicknamed it to make it sound cooler), something amazing happened: I actually forgot I was working out! The meditation practice made it ridiculously easy to take my mind off of how much I hate running and focus instead on controlling my breathing and my wandering mind.

Sure, not all the meditations I tried worked quite as well. But it’s all about finding the right series of guided meditations that work for you. Just be warned: Because meditation can be so all-encompassing, I decided to do my exercises inside instead of running on the street. (AKA I didn’t want to have to deal with traffic, pedestrians and other hazards while getting my mindfulness on.)

On the whole though, medi-running is definitely staying in my bag of exercise tricks. Heck, I’ll try just about anything to make running suck less.

Have you tried meditating while running? Tweet us by mentioning @BritandCo.

Ashley Macey
Ashley Macey is a lifestyle freelance writer who loves all things fitness, wellness, and creativity. When she's not exploring her home in the Pacific Northwest with her dog Max, you'll probably find her curled up with a good book and some hot tea. Follow her daily jaunts on Twitter.
Android Apps
Health
Android Apps Fitness Healthy Living