The Emoji Set You’ve Been Waiting for Is Here 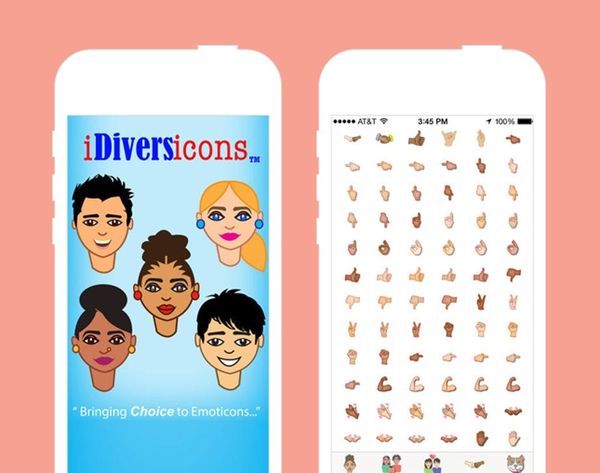 To say we love emoji is an understatement. We text it, tweet it, wear it and live by it, but let’s face it; our little hand clapping, flamenco dancing communication system is seriously flawed in the diversity department. As adorable as those jolly (or not-so-jolly) little emoticons are, they don’t represent the whole population that uses them — and no, blondes, I’m not talking about us.

We have made demands (ones that have been heard and responded to, even…) to the all-powerful emoji-ati to expand the races and ethnicities represented in the standard set, but we appreciate a DIY way to solve the problem while we wait for major change. And thanks to a mother-daughter team and their app iDiversicons, a whole new population of emoji is just a download away.

When pre-med student Katy Parrott expressed to her NASA program manager mom Katrina “wouldn’t it be nice to have emoticons that look like the person sending them?” Katrina didn’t tell her daughter to stop texting at the dinner table and put her phone away. She agreed, and the two decided to find a solution for the millions who also would agree that it would be nice to see themselves and friends reflected in their intimate, animated conversations. Together, they developed the iDiversicons, which features a new set of African-American, Asian, Latino/Hispanic, Indian, Caucasian and biracial emoji.

Bet your petition for a taco emoji feels a little silly now, huh?

When you can’t download it, DIY it. And then let everyone download it — that’s a motto that we can get down with any day. Download your own set of iDiversicons for Android ($2) and iOS ($2) and let’s hope a similar series automatically populates your phone as part of an official update in the very near future.

What emoji do you want to see next? What do you think of iDiversicons? Sound off below!

Lisa Raphael
In her past professional lives, Lisa has served the masses as the Editorial Director at Brit + Co, Bieber Whisperer at J-14, Golden Girls Fan Club Prez at Lifetime and Talk Show Host Understudy to Katie Couric. Now, she's taking on the sports world at The Relish, teaching Hairography 101 in her spare time and will forever be trying to fill the hole Zayn Malik left in her heart.
Android Apps
Tech
Android Apps Emoji
More From Tech