This New Conference Celebrates Creativity and Collaboration Among Modern Moms 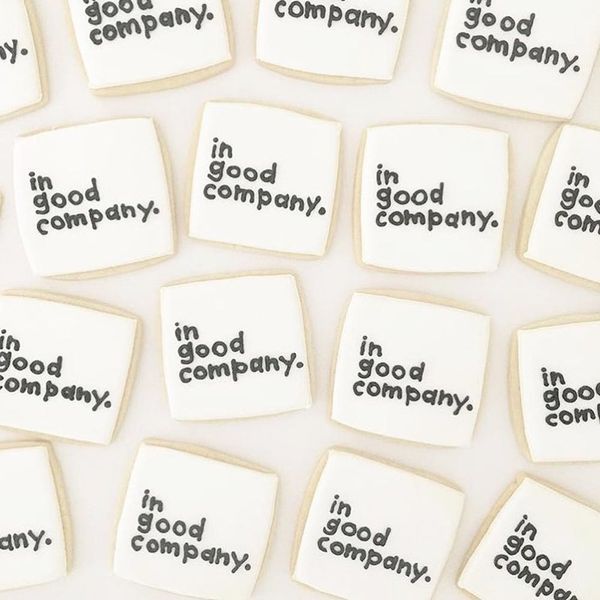 Life can feel like a messy juggling act or a roller coaster, especially when you’re so busy balancing work and home life that it’s tough to keep up and stay on track. We recently caught up with Katie Hintz-Zambrano, a well-known former fashion journalist who co-founded the popular parenting website Mother Magazine and recently launched a brand new conference, In Good Company, for entrepreneurial and creative moms. Inspired by Katie’s passion to connect like-minded women and support female business owners, we got the scoop on why she put the conference together, what she’s most proud of, and how she sees the future. Read on to get the scoop in our Q&A.

You know you've made it when you've got your own cookie 😜thank you @xobakes for these custom sweet treats! T minus 3 days 💥#ingoodcompany

Brit + Co: We’ve known you as a journalist, community builder, and the founder of beloved Mother Magazine — and recently heard about your latest venture, a conference for creative and entrepreneurial moms called In Good Company. What inspired you to put such a fantastic event together?

Katie Hintz-Zambrano: I founded In Good Company as a way to create my dream conference. I’ve found that many of the lifestyle conferences I’ve attended don’t speak to or address the deeper “mom” topics, beyond asking the very big and hairy question, “How do you balance it all?” to panelists who happen to be mothers. Meanwhile, the conferences that are geared toward “moms” don’t seem to be catering to the modern mothers that I see reflected in myself and my friends. To me, modern motherhood is women who are accomplished, ambitious, stylish, and thoughtful about our careers and how we’re raising our kids. We have identities intertwined with being mothers, but also completely removed from being mothers. I wanted to create an event that would update the “mom” conference for this demographic.

In Good Company is on @forbes today! "17 Brilliant Quotes From The Coolest Moms In Business" Thank you @stylenik for the chill-inducing write-up. Such inspiring quotes by the ladies above & many more! 📷: @kbrodge LINK 👉 https://www.forbes.com/sites/kristenphilipkoski/2017/10/06/17-brilliant-quotes-from-the-coolest-moms-in-business/#4eb4c3ad5ecf

B+C: How did you decide which topics to tackle during the conference? After seeing it all come together, what are you most proud of?

KHZ: I wanted to keep the event tight and curated the first time around, so I zeroed in on not just having a conference about motherhood in general, but for a very specific type of mother (and one that I personally know best): those who own businesses in creative industries. I think we have so much in common yet aren’t always gathered under one roof; I’ve also noticed that creative industries are often looked at as hobbies and not real businesses. I want to try to turn this notion around and help those in attendance receive support and mentorship — both from one another and also from the stage. For example, all three panelists on the opening panel, Motherhood + Entrepreneurship, are part of an elusive group of female business owners who have reached (and surpassed) the $1M revenue mark. Only two percent of all female business owners have done this, which is just astounding. To have so many of those powerhouse women on stage (and many as attendees), all under one roof was just one incredible aspect of the conference.

B+C: We totally love and support your vision. Congratulations on the early success you’ve already achieved! Having just hosted the very first conference, what do you hope that In Good Company can become? Tell us a bit more about how you see the future of the brand and community.

KHZ: Ultimately, the goal with In Good Company is to build a vibrant community around this specific overlap (creative + business owner + mother), to do a deep dive into issues impacting this community, and ultimately leading to economic empowerment for these women.

In Good Company will for sure move beyond just a one-day conference based in the Bay Area to host events of different sizes and in different markets. There’s already been a surge in demand for an In Good Company conference in New York City (my former home!), Los Angeles, and Chicago. We’re planning some smaller offshoot events that’ll hone in on specific topics, such as Women + Money, a thorny topic that I personally know so many women are keen to dig into. Beyond in-person events, we’re also working to cultivate an online community so people can connect no matter where they live.

In Good Company Speakers on Creativity, Motherhood, Collaboration, and Their Career

"I can do what used to take me 3 hours in 30 minutes now (as long as my kids aren't with me! Ha!). But, beyond time management, becoming a mother has just generally taught me that I can do anything! I lived life with a lot of fear prior to having children, but having them created an intense drive for me to overcome it and live courageously. I didn't want to pass down the fear that had so often plagued me. And, since kids truly learn by example, I knew it/I had to be the real deal. Interestingly enough, those two skills have been paramount in starting and running a business." -Elle Rowley, founder of Solly Baby Wrap and co-founder of ARQ. ✨Elle will be on the opening panel, "Motherhood x Entrepreneurship," alongside designer Clare Vivier and Amanda Chantal Bacon of Moon Juice at In Good Company on 9/29. ✨Tickets on sale at the link in bio ☝🏼💡#ingoodcompany #beingoodcompany

I can’t imagine any endeavor more creative than motherhood. At its core, motherhood is about the creation and sustaining of life, so I guess it makes sense that it has pushed me to create a product and start a business. There’s no way I would have done either of those things, in the way that I have, before becoming a mother. I want my children to know that they can do anything and, for them to know that, it’s most important that I know that about myself.

"I often talk about the mom guilt that I (and so many of us) feel when we are working and away from our children. Once my oldest became old enough to start to understand what I do, learn about it, and get excited about it, that really helped remind me that I am teaching my girls what’s possible and that you can create a job or career from nothing. I want them to see that their mom has interests and goals and hope that will indirectly inspire them in the future, as well." Joy Cho, mother of two and founder of Oh Joy, will be speaking on the In Good Company panel How Social Media Powers My Business, alongside @alex_elle @imlauramiller and @angelatafoya of @lonnymag #cantwait #ingoodcompany #beingoodcompany

Once I became a mother, I felt more of a sense of urgency and need to be the type of person I wanted my kids to learn from and be inspired by. I let myself give up less, I worked harder to get what I wanted, and I made sure to only say yes to the things I felt like I could give my all to.

I feel like I am teaching my kids about pursuing your dreams (outside of motherhood) and about how you can create any job you want. My oldest daughter has gotten to go see photo shoots with Target and visit studios of other creative friends and colleagues in LA. Most of my close friends are female business owners, and that’s a pretty awesome thing to be surrounded by as a kid.

"Being a working mom can often times feel like a delicate dance where some days I feel so proud of the life and career I've built and hope to instill the same work ethic and values in my daughter, and then other times I really beat myself up over the moments spent away from her and all that I could potentially be missing. 'Balance' is this elusive notion we throw around and it can feel so out of reach at times. One thing that's really helped me through the course of these two years of motherhood and the rollercoaster ride of emotions that come with it is a network of supportive moms that understand what it's like and are there to lend an ear. Sometimes all you need is the magic of hanging out with another inspiring woman in the same boat as you." -Angela Tafoya, mother of Tallie, 2, editor at @lonnymag, and moderator of the In Good Company panel "How Social Media Powers My Business" alongside @ohjoy @imlauramiller and @alex_elle #ingoodcompany #beingoodcompany #thejuggle

I will say that since becoming a mother the level of efficiency and speed with which I can get things done is night and day — maybe it’s just because as a mother, time is of the essence and you don’t have a lot of it. So, baby-free time is really invaluable to dial in and get it done, but also when I’m with her I want to give my whole self with no distractions. When it comes to creativity and the impact that has had on my career, I think motherhood has really allowed me to reflect on the importance and depth of things. Whether it’s the time spent away from her or I think she’ll be proud of my decision to do XYZ, all of this is considered and really keeps me inspired and focused on doing my best work.

How do you balance motherhood, creativity, and career? Tell us what’s been tough and what works well on Twitter @BritandCo.

Krista Gray
Krista Gray is a web producer and freelance writer who lives in San Francisco. When she's not working with clients through her company GoldSquare, she loves reading, traveling, and learning new things.
Career
Creativity
Career Parenting
More From Creativity