In Students’ Own Words: What the ‘March for Our Lives’ Is Really About 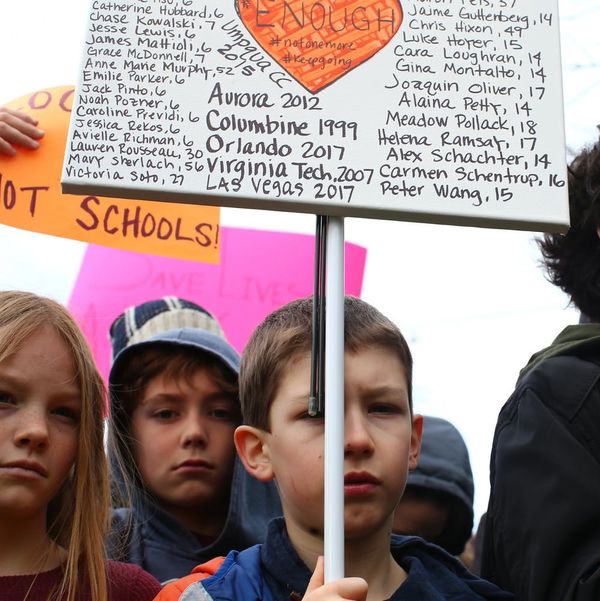 As teens around the United States walked out of class on March 14 to honor victims of gun violence and protest for reforms ranging from gun control to better mental health support for students, young people were also looking ahead to the March For Our Lives. Set for this Saturday, the national March For Our Lives is spearheaded by survivors of the February 14 Parkland, Florida shooting where 17 people were killed.

Throughout the various protests, walkouts, rallies, and marches that have taken place and are still in the works, students have called for different types of action. Many of the most outspoken Douglas High School Students have stayed focused on specific gun control laws, while students in Chicago have also demanded divestment from police and equal funding for Black and Latinx schools. Regardless of their specific demands, it’s clear that teens across the country have been concerned about their own safety for a long time, and they want to be heard.

“There was a bomb threat on our school in October, and it came out that one of the two people who made the threat had his dad’s gun,” she tells us. “It really made everyone at school panic.”

Since then, Gibbins says, she hasn’t felt totally safe on campus. “Even walking outside every day was very freaky knowing that it would be easy for anyone to shoot up the school,” she adds. Since Parkland, she’s felt even more unnerved. “It’s really scary, honestly, just knowing that a school only a state away, that this happened to them… If we already had people at [our] school with [violent] thoughts, who knows how many more there are?”

Gibbins is certainly not alone in feeling unsafe at school before the tragic shooting in Parkland.

Lauren Malloy, a 17-year-old student at the Mary Institute and St. Louis Country Day School says that has also been threatened with violence at school. Malloy tells us that even before she attended, the school had received a bomb threat. Then this past fall, some students at the school were expelled after it was revealed that they had been sending racist messages over Snapchat.

The students’ expulsion went public, prompting virulent, threatening ire from white supremacists online. Someone went so far as to send a slur-filled email to the school threatening to “make Columbine look like a f***ing joke,” and included Nazi slogans. The person who sent the message then posted a screencap of it to 4chan, an anonymous online message board infamous for attracting extremist groups and trolls.

The racist threat shook the student body. But it also served as a terrifying reminder that, in American schools, no student can ever feel truly safe.

Maddy Pritzl, a senior at Bay Port High School in Green Bay, Wisconsin tells us that some of the students organizing against gun violence at her school have encountered resistance from their peers. Some of her classmates “have been saying that we’re not changing anything,” Pritzl says.

“Well, we’re going to eventually, and [the march] is just another step towards real change.”

Through organizing around walkouts and the March For Our Lives, Pretzl explains that she’s been able to meet more teens who are interested in politics and “who wanted to do something and were sick of being silenced was not only motivating.” She adds that these bonds are what she expects will make long-term activism possible.

“I’ve been able to bond with so many people who I never would’ve met without this march, and that’s been something really special,” she says. “Not only do we want to march, but we want to make real change and so we’re not going to stop after this event.”


Given what so many students have been through, it really should come as no surprise that they’re fed up with feeling scared while also being ignored by adults. Walking out, protesting, and this weekend marching around the country has been crucial in helping many teens feel heard.

“The march is important to me because I’m done letting my age dictate my impact, and I’m ready for change through action,” 17-year-old Cecilia McDermott, a senior at Appleton North High School in Appleton, Wisconsin tells us.

Though there’s some variance in what students around the country are calling for in their protests, there’s a shared underlying fear for safety and a sense of not being heard or taken seriously. Through weeks of consistent and very public activism, teenagers are finding ways to make heard what they’ve already been saying for some time. Now, it seems, more adults are finally starting to listen.

With additional reporting from Kelli Korducki.

Elizabeth King
Elizabeth King is a politics, history, and culture writer based in the Twin Cities. She is generally pretty cranky but still enjoys traveling, music from the early 2000's, and plotting the resistance. Feel free to say hi on Twitter at @ekingc or check out some of her work at www.elizabethcking.com.
Controversy
Empowerment
Controversy Teens
More From Empowerment