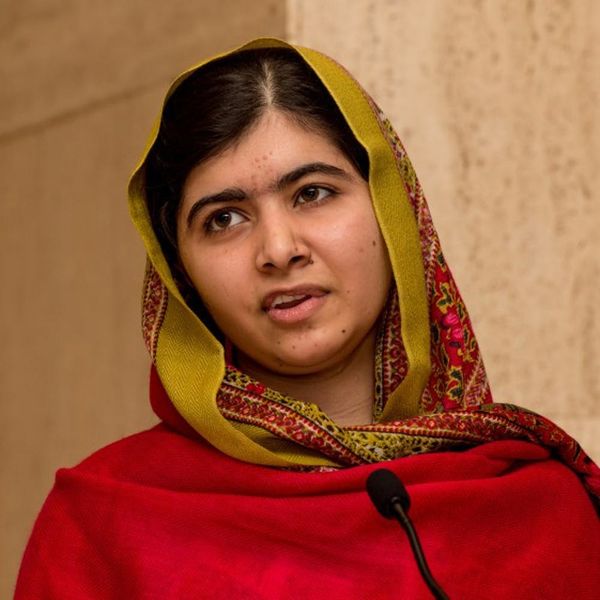 Forget the big book of names. There are so many other places to draw inspiration for naming your baby. Celebrities, movies, nature and books have all given us new naming trends to ponder when searching for the one. But if you’re really looking to be inspired, look to those who have led millions. Whether they’re civil rights activists or renowned in their fields of study, below are 20 creative baby names borrowed from the most inspirational leaders and figures from history.

1. Amelia: The story of the first female aviator to fly solo across the Atlantic, who then disappeared during her circumnavigation of the globe, has never stopped captivating our minds. Seriously: Amelia is the number two girls’ name of 2015!

2. Eleanor: First Lady Eleanor Roosevelt made a name for herself that’s as memorable as her husband’s (FDR), as she fought for human rights and women’s issues.

3. Emmeline: A great alternative to Emma or Emily, this name is inspired by Emmeline Pankhurst, the leader of the British suffragette movement.

4. Florence: Meaning “flourishing” or “prosperous,” Florence is a nod to Ms. Nightingale, the mother of modern nursing.

5. Harriet: After she escaped from slavery herself, Harriet Tubman helped many others flee via the Underground Railroad, making her one of the most-remembered abolitionists.

6. Malala: How can you not admire this Pakistani teenager, who is a present-day activist for women’s rights and education, as well as the youngest Nobel Peace Prize recipient? Malala is a name that will inspire generations to come.

7. Marie: If you reckon you have a little scientist on the way, Marie is a classic French name shared with the famous Nobel Prize-winning physicist, Madame Curie.

8. Rosa: Congress has called Rosa Parks “the first lady of civil rights” due to her fight against racism and segregation, beginning with that fateful bus ride in Montgomery.

9. Sandra: As the first woman to serve as a Supreme Court justice, Sandra Day O’Connor paved the way for young girls everywhere to aspire to great things in government. Her name means “defending men” — we’re going to choose to interpret that as “humans.” :)

10. Teresa: An international symbol of charity and service to the sick and the poor, Mother Teresa was one of the most inspiring figures of the 20th century.

1. Abraham: President Lincoln, who led the country through the Civil War and abolished slavery, is strongly associated with this Biblical name. Don’t forget, you can also get creative with his last name — Kristen Bell used it for her first daughter.

3. Cesar: Oddly, this name only translates to “head of hair,” but it has much more meaning when taken from Cesar Chavez, who was one of the best known Latino civil rights activists due to his dedication to farm workers and the labor movement.

4. Desmond: Bishop Desmond Tutu has campaigned against many issues that have plagued South Africa, from apartheid to HIV/AIDS and homophobia. It’s no wonder he won the Nobel Peace Prize.

5. Franklin: You’ve got two American political leaders to consider here. First is, of course, Benjamin Franklin, the Founding Father and polymath. But don’t forget that Franklin can also be a first name, as in Franklin Delano Roosevelt, one of the country’s most admired presidents.

6. Frederick: After escaping slavery, Frederick Douglass penned three of the most influential books of the abolitionist movement. It’s fitting that the name Frederick means “peaceful ruler.”

7. Martin or Luther: When you think “civil rights,” Dr. Martin Luther King, Jr. is the first person to come to mind. While Martin means “warlike” and Luther means “army people,” that is overshadowed by Dr. King’s message of nonviolence and equality.

8. Neil: You don’t have to go full on Star Wars to give your son a space-themed name. The first man on the moon had a classic Irish name (meaning “cloud”) that does the trick.

9. Nelson: From imprisonment to presidency, Nelson Mandela’s long life of fighting racism and apartheid in South Africa is one well worth a namesake.

10. Winston: Churchill served as the UK’s Prime Minister during World War II, and the way he inspired the people and forces to victory definitely earns him a spot on this inspiring leaders list.

What inspiring leaders would you honor with a name? Tweet your favorites at us @Britandco.

Molly Griffin
Molly is a writer and editor from Boston who loves traveling, eating and occasionally being a little too candid. She lived in Dublin, Ireland for the last four years but recently moved to San Francisco to escape the rain. Now, she’s on the lookout for a good proper pub.
Creative Baby Names
Baby Names
Creative Baby Names Unique Baby Names