The 7 Things We Love About iOS 7 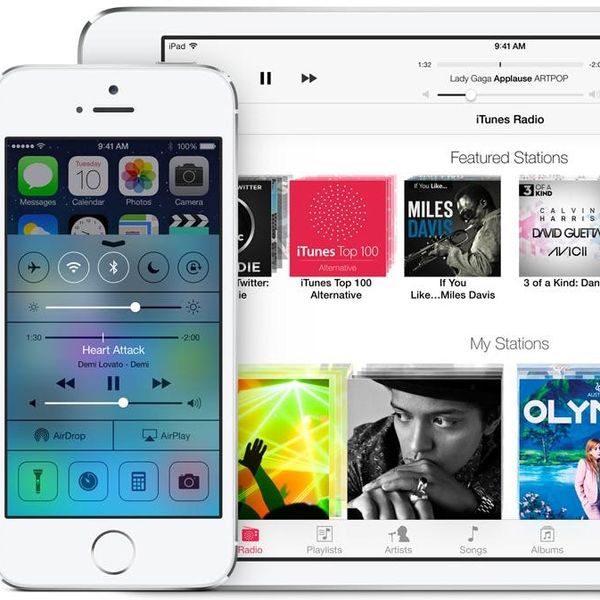 If you haven’t heard, Apple released a few things recently that are kind of a big deal. First and foremost, they’ve announced (and started selling) a new line of colored and metallic iPhones…with fingerprint sensors to boot! And coupled with the cool new hardware is a major upgrade to the iPhone software: iOS 7. Just out yesterday, we’ve taken a few twists and turns while scoping out all the things this new software can do, and we have to say that we’re pretty darn impressed. To download it for yourself, either plug your phone into iTunes (and make sure you have the latest version of iTunes downloaded), or open your phone and go to Settings > General > Software Update.

To keep from gushing about all the nooks and crannies we love (you know we’re big Apple geeks and could chat about their products all day), we thought we’d cut it down to our seven absolute favorite new features.

1. Overall Design: We’ll be honest. It was weird at first, but so was the Facebook News Feed when it first launched in 2006. (Remember how many people complained?) After just a couple of days, we are now easily finding our way around and starting to really love the simplicity of the design — especially how much more vibrant all the colors are. The colorful icon for “Photos” (aka your Photo Library) is by far our favorite addition.

: Speaking of Photos, apart from the design overhaul, the new camera features are making us extremely giddy. We’re itching for more

projects! First and foremost, the camera itself is SO. FREAKING. FAST. It takes photos as soon as you touch the shutter button. And if you hold the button down, it will take multiple photos in a row until you release. (Great for those moments when you are trying to capture something in motion and need a whole lot of options for the best shot.)

Secondly, the photo library has evolved to categorize your pictures by year and place. There’s even an integrated map that will show you all your photos based on the location they were taken! Love that. Finally, now you can share photos via a feature called AirDrop, send them instantly to one (or multiple) of your friends, and have them automatically saved to their camera rolls, too. This makes photo sharing way, way easier. No more emailing pics! Example: next time you take a group photo, you don’t ALL need to snap a picture. Only one person will have to take it and then you can all get a copy instantly. Brilliant.

3. iTunes Radio: Apple calls this one “radio re-imagined” but we call it “iTunes turns into Pandora.” Basically, you can now create playlists and listen to pre-programmed “stations” that get smarter as you listen to them. Enough said.

4. Command Center: You type-A people are going to love this one. (I know I do.) Basically, Apple finally figured out that most iPhone users are constantly in need of: setting alarms, taking photos, calculating things, needing a flashlight, finding wifi, and adjusting controls like volume and brightness. So, they put all of these things together in one easy-to-open panel (just swipe up from the bottom of your phone). It’s always there, no matter which app you’re in, making it awesome for fine tuning your phone on the fly.

5. Closing Apps: In earlier versions of iOS, to shut down apps (which is a method used to help save battery, by the way), you had to do so one by one. Now, you just double tap your home button and swipe up. Voila! All apps are shut down. Battery saved.

6. Blocking People: Step off, ex-boyfriends, stalkers, bullies, and telemarketers! Now you can block all unwanted calls, messages and FaceTime requests from people who you don’t want to hear from. To do this, just click the Info button on one of your contacts and scroll down to hit “Block.” Goodbye!

7. Enhanced, Auto-Updated Apps: Not only do many of your favorite apps (Facebook, New York Times, etc) now have an enhanced design and user experience (like integration with AirDrop), but they auto-update, too! That means you never have to update an app again, you’ll never have an annoying red number on your screen, and you’ll always have the latest new features for all your apps. WIN. (We’re especially pumped about this for our Brit + Co. app… which all of you should have by now if you don’t already!)

The new App Store also has a cool feature called “Apps Near Me” which uses your location to detect which apps may be most relevant to where you are. And for moms and dads (and aunts and uncles), you’ll be excited to know there’s now a Kids category in the App Store! Related: our favorite baby onesie ever, “There’s a nap for that.”

BONUS: You guys, Siri is now a dude, too! (Just go into Settings > General > Siri to change gender preferences.) Sadly, he can’t yet be programmed to talk like Morgan Freeman or Ryan Gosling, but he CAN search through your Twitter feed to find any relevant tweets related to what you’re saying to him. It’s the little things, folks.