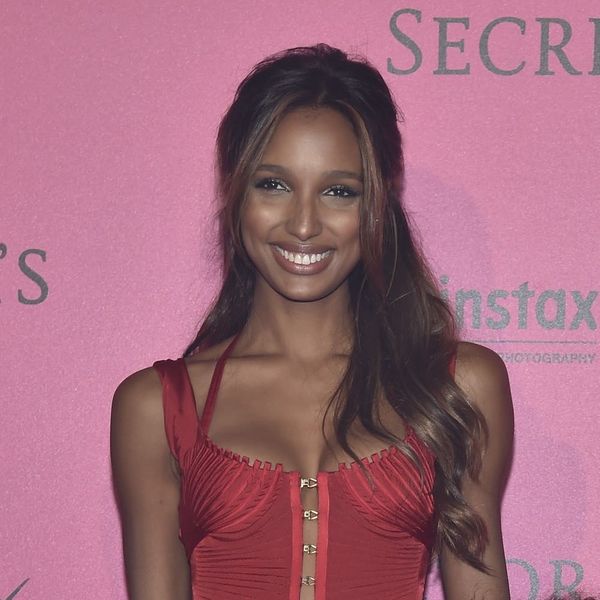 After weeks of anticipation, the Victoria’s Secret fashion show has finally happened, and we’ve gotta say, it was well worth the wait.

One model in particular stood apart from the pack, however — perhaps because she had a little *extra* shine in the form of the $3 million Fantasy Bra, adorned with 450 carats of 9,000 emeralds, diamonds and gems, that took more than 700 hours to make.

Jasmine Tookes was the lucky wearer of this year’s show-stopping creation, and needless to say, it was a dream come true for the model.

“As of now, this is definitely the most exciting moment of my career, 100 percent!” she told us as last night’s broadcast aired. It was quite a statement coming from a woman who Oprah once requested to rub her skin against following a Ralph Lauren event (yes, really).

In fact, so excited was Jasmine to wear the masterpiece that she broke down in tears the first time she put it on.

“Putting on the bra for the first time was such an insane feeling,” she said. “I began to tear up once it was fully on my body! I felt like I was dreaming.”

But the moment was very real, as was the moment she found out she’d been given the show’s highest honors. After reportedly being overcome with emotion and dropping to her knees, Jasmine says she FaceTimed her mom along with the show’s CMO, Ed Razek. “[I] told her the amazing news,” she said. “She also fell into tears and couldn’t believe it.”

Once the pair recovered, it was time to celebrate. “The girls (that would be Taylor Hill, Romy Strijd and the company’s newest angel, Josephine Skriver, whom Jasmine counts amongst her closest friends) and I went out for a nice dinner and had some Champagne with everyone from Victoria’s Secret,” she recalled.

The festivities didn’t last for too long, though: Instead, for the past two months, Jasmine has been busting her butt to be in tip-top shape for the show. “I give myself about two months to prep,” she explained. “Closer to the show I really try to get the most sleep I can and also try to eat a bit more clean than usual. I’m very focused on my workout so that I’m nice and toned for the show.”

For the American model, that includes “a lot of weight training, like squats and lunges,” though she does throw some barre into the mix, as well. “I like to switch up my workout at Physique 57,” she shared.

It also means healthy doses of carbs and protein to offset all those grueling workouts. “I eat a lot of grilled chicken, veggies and rice,” she said. “It’s important for me to have carbs and protein in my diet because I am training so much, and don’t want to burn too many calories.”

The combination clearly worked — girl looked FIERCE AF. In fact, she looked so good up there, you’d never guess that just moments before she walked out onto the runway, she was anxious. “I get more anxious than nervous,” she shares. “It’s such an exciting time.”

So what’s a girl to do now that it’s all over? Get back to basics. Instead of wearing the stunning Fantasy Bra on the daily, Jasmine will likely be back to her beloved bralettes, which she says are her off-duty go-to. “They’re great to wear everyday,” she told us. “There are so many different colors and shapes. You can even have them exposed as part of your look!” (Perhaps she’ll even pair them with her new Stella Luna thigh-high boots, which she cites as her current favorite closet piece. Yowza!)

Sounds pretty fitting to us.

What was your favorite moment of last night’s fashion show? Tell us over @BritandCo!

Nicole Briese
Nicole is the weekend editor for Brit + Co who loves bringing you all the latest buzz. When she's not busy typing away into the wee hours, you can usually find her canoodling with her fur babies, rooting around in a bookstore, or rocking out at a concert of some sort (Guns N' Roses forever!). Check out all her latest musings and past work at nicolebjean.com.
Fitness
Celebrity News
Fitness interview lingerie Victoria's Secret
More From Celebrity News