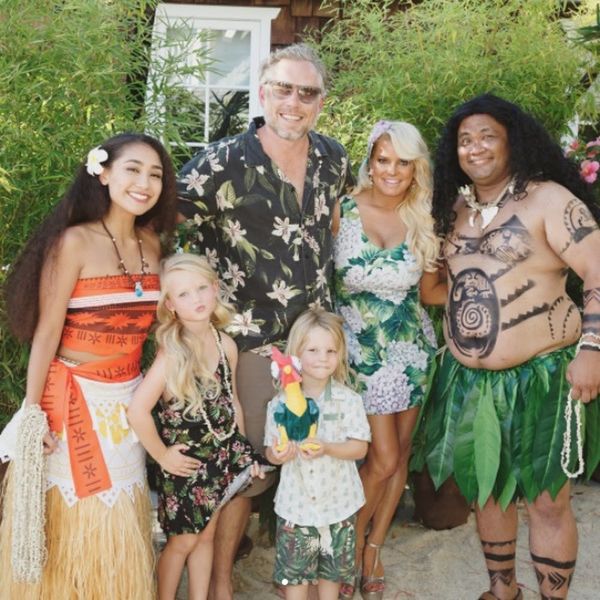 Kim Kardashian-West and Kourtney Kardashian *just* threw a Moana-inspired birthday celebration for four-year-old North and (nearly) five-year-old Penelope that was total #partygoals. But now Jessica Simpson’s son has celebrated his own special day with a Moana-themed birthday bash that rivals the Kardashian party in every way.

Though it wasn’t Dwayne “The Rock” Johnson and Auli’i Cravalho, people dressed as the characters Maui and Moana did make an appearance and were happy to pose with the thrilled birthday boy and his mom, his dad (Eric Johnson), and his big sister, five-year-old Maxwell.

With the family’s entire backyard decked out to look like the film’s Isle of Te Fiti, there also appeared to be plenty of games, a bouncy castle (natch), delicious Moana-themed treats, and even snazzy gold-lettered personalized canvas bags filled with toys from My 1st Years. It looks like the birthday boy wasn’t the only one walking away with a whole bunch of presents — not to mention memories to last a lifetime.

Simpson shared a look at the fun on social media, posting a pic of the super excited birthday boy with the loving caption, “May wish #4 come true my beautiful baby boy 💚#ACEKNUTE.” Judging by the wildly happy look on his face, we have no doubt that his wish has already come true.

Have you (or people you know) thrown a Moana-themed party? Let us know @BritandCo!

Desiree O
Desirée O is a ‘Professional Bohemian’ who loves anything and everything related to the arts, entertainment, and pop culture. She ADORES being a ‘Newsy’ for Brit + Co, covering all of the latest tidbits of awesomeness that you want to read about. When she’s not writing, she’s either making messy art, going on long adventurous walks with her camera, or poking around over at bohemianizm (http://www.bohemianizm.com/). You can find out about Desirée O and her work at http://DesireeO.com/ or follow her on Twitter @DesireeO.
Birthday
Celebrity News
Birthday Disney