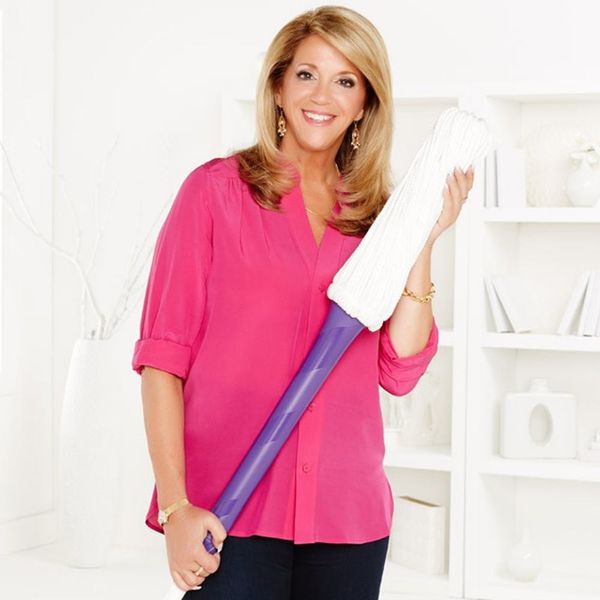 It’s been a huge year for #girlbosses in all areas — Kate Hudson is giving Sophia Amoruso a run for her money, Nicole “Snooki” LaValle is taking DIY to new levels, Zendaya is tapping into her spidey senses and Joy Mangano‘s life was the inspiration of Oscar-nominated flick, Joy. It doesn’t get much bigger than having Jennifer Lawrence depict you onscreen in a movie based on how badass and successful you are. “Sometimes I still have to pinch myself,” Joy shares with us. Yeah, we would too.

With a career spanning more than 25 years, Joy is the inventor behind products like the Miracle Mop ($20), Huggable Hangers (prices vary) and My Little Steamer Deluxe (prices vary) found in major retailers across America from HSN to Target to Macy’s. The entrepreneur built a multi-billion dollar empire on HSN and has become a household name in the household goods department. She caught up with us to impart some of that sage advice to help you on your very own #girlboss journey.

1. Comfort is key. Joy says there’s no better way to project #girlboss attitude than to be comfortable. “I think one of the biggest things I’ve learned over the years is to find two or three staple pieces that you know you look great in, and more importantly, that you’re comfortable in,” she tells us. Bonus tip? “It also helps to carry around a My Little Steamer with you so you can keep your clothes looking crisp wherever you go!” (wink, wink!)

2. Trust your gut. “It might sound crazy to take a leap of faith into the unknown if you’re venturing out to start a business or just starting out in your career, but I think it’s always important to do what feels right to you,” she says. “Voicing your opinion or ideas when needed is important, and trusting those opinions and ideas is even more crucial. Others will respect you for holding fast to those beliefs.”

3. Take the haters’ words in stride. “It’s best to listen to their criticism, but never take it to heart,” she says. Instead, she advises surrounding yourself with people who encourage your ideas and dreams. “You want to surround yourself with people who have a ‘can-do’ attitude who believe that no dream or idea is too far out of reach,” she says.

4. Have role models. For Joy, that included her biggest inspiration to date — her grandmother, Mimi. “Mimi was a woman who worked day and night as a waitress during a time when women weren’t really supposed to work that way at all,” she shares. “She was determined to provide for her family, and she had a tremendous impact on me growing up. I thought that if she could climb her own mountains and keep going, then I could do the same. So that’s just what I did,” she recalls.

5. Remember the end game. Joy overcame many hurdles, from money struggles to raising her children as a single mother to getting her first product on QVC, but once she did, the rest is history — she sold 18,000 units in a single hour, a feat that still ranks at the top of her proudest moment list. “The sense of accomplishment I felt afterward really validated all of the hard work and sleepless nights that led up to that moment,” she said.

6. Learn from your mistakes. There comes a time in every woman’s career when she makes a mistake (or two… or three… ) and will need to find a graceful way to recover. Don’t worry — Joy’s got you covered. “The best way to rebound from a moment that may not be your best is to immediately look for the positive, and focus intently on it,” she says. While she concedes that it’s important to learn from your snafus, she says it’s equally as important not to dwell on them, lest you risk missing the silver lining staring you in the face.

7. Be a mentor. For those of you who’ve made it thus far on your own and are now considered senior level, Joy’s got some advice for you, too: Pass it on. “If you ask anyone who has made it to a certain level of success in their field how they did it, they will likely tell you that they had someone who taught them crucial skills or gave them key advice along the way,” she says. “It’s always been very important to me to give back to those around me. The point of having experience is not necessarily to propel yourself forward all the time, but to impact the lives of those around you.”

8. Keep family (whether biological or chosen) close by. After all, Joy says she couldn’t have dreamed of achieving the success she has without those who supported her. “I’ve been very blessed over the years to have the support of my family day in and day out,” she says. Whether that means literally, with the hard work of her children (two of whom work at Joy’s company), or emotionally, “I think it’s really important to have that support system in place from your closest loved ones,” she says. “There were definitely moments where I was doubtful that I would succeed, and there were times that everything became completely overwhelming. I really think that having my family around was a major reason I was able to overcome those fears, difficulties and doubts.”

“In my world, there is no limit to what you can create and achieve,” she says. “Dream big, think big and keep a glass half-full attitude throughout the journey there.” Hear, hear!

What do you think of Joy’s career tips? Let us know over @BritandCo!

Nicole Briese
Nicole is the weekend editor for Brit + Co who loves bringing you all the latest buzz. When she's not busy typing away into the wee hours, you can usually find her canoodling with her fur babies, rooting around in a bookstore, or rocking out at a concert of some sort (Guns N' Roses forever!). Check out all her latest musings and past work at nicolebjean.com.
Girlboss
Work
Girlboss
More From Work