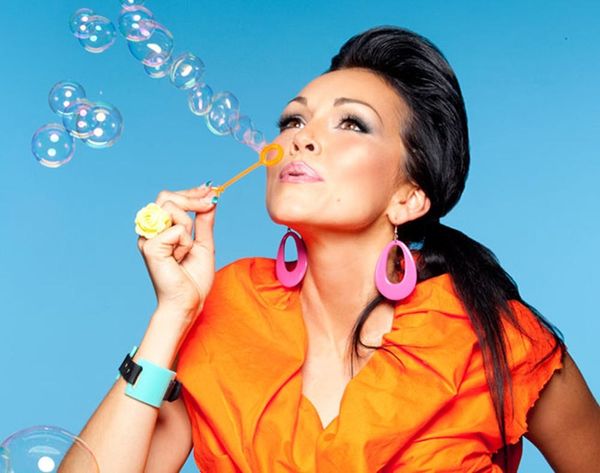 If you’re like us (and we know you are) your computer and your smartphone are your second beauty mirrors thanks to makeup artists like Kandee Johnson showing us how to, what to and why to on YouTube. Whether we have a big date or a big pimple, Kandee is one of our main go-tos and (lucky for us AND you) she’s one of the speakers set to take the stage at Re:Make SF in just a few weeks. (PSA alert: it’s your last chance to order early bird tickets to catch Kandee and other speakers in our first day conference, do it by EOD on Friday!)

We’re, well, not okay waiting all the way ‘til September for QT with Kandee, so the makeup vlogger virtuoso took some time to chat with another woman WE go to on the reg for all of our makeup and hair tips, tricks and advice, Brit + Co beauty guru Misty Spinney. Leave it to our girl Misty, who got the 411 from Kandee about five of HER favorite personal videos. Keep reading for the prettiest playlist ever.

1. The Skin Doctor: Lemon Trick: Did you know that one of Kandee’s most-watched hacks almost didn’t make it to YouTube? “This was a video that I filmed but never uploaded because I thought it was horrible, but then one day I didn’t have anything to put up so I was like, Oh, I’ll edit that old video that’s like eight months old. I threw it up there and now it’s my second most popular video, so it’s just kind of funny!

I have all these awesome ideas and think, This is going to get MILLIONS of views! and no one likes it and then this old one becomes the most popular.” Hmm, sounds like a tip we all should keep in mind, eh?!

2. Snow White: We’re big believers in prepping for Halloween whenever you feel like it. Like, now. If you fall down the rabbit hole with Kandee Johnson’s costume makeup tutorials, you’ll agree. She spilled to us that they are some of her favorites, and this one tops the list.

3. Queen of Hearts: “This is probably one of my favorite ones and I love the look. It was an older video I made when I didn’t think anyone was watching and I’m just a goofball in it.” Those goofball ways are definitely what have kept us tuning in to her tutorials for years. Oh, and check out that makeup, it’s just insanely awesome and a great example of how you can make any outlandish look beautiful for a costume party.

4. Rosie the Riveter: “The Rosie the Riveter tutorial is one of my favorites,” Kandee told us. “Because it’s just fun.” Agree! Kandee has shown her millions of budding makeup mavens how to do full on Rosie and brought the look back in her “two ways to tie a bandana” vid. We love this one because it’s doable any day o’ the year, not just when you’re in costume.

5. Pin-Up Makeup: Kandee revealed that some of her earlier pin-up tutorials still top her list of fondest favorites, and that’s clear in how she’s taken and reinvented them over the years. The above tutorial demos how to make pin-up makeup pretty — even for prom queens!

Are you a big Kandee fan like we are? Share your favorite video below AND let us know what you want to hear from Kandee next!

Lisa Raphael
In her past professional lives, Lisa has served the masses as the Editorial Director at Brit + Co, Bieber Whisperer at J-14, Golden Girls Fan Club Prez at Lifetime and Talk Show Host Understudy to Katie Couric. Now, she's taking on the sports world at The Relish, teaching Hairography 101 in her spare time and will forever be trying to fill the hole Zayn Malik left in her heart.
Posts that contain video
Fashion
Posts that contain video Re:Make YouTube
More From Fashion