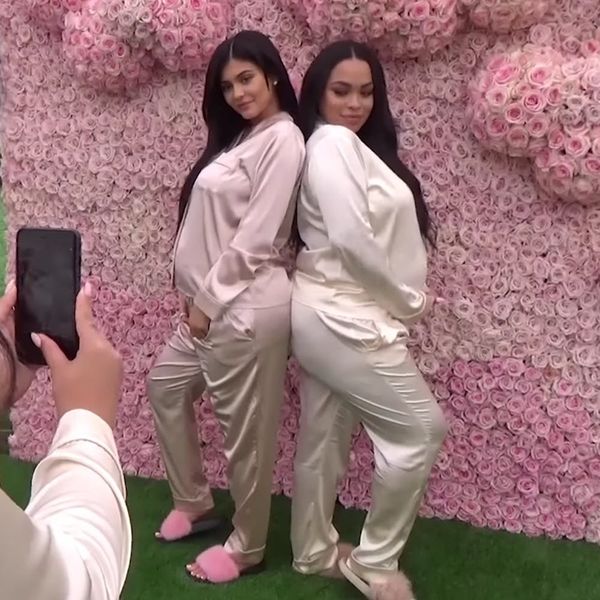 It’s a busy time for the KarJenner family. Kim Kardashian West just announced the arrival of her daughter, Chicago West. Khloé Kardashian is expecting her own little one later this year. And Kylie Jenner just confirmed suspicions about her own pregnancy by revealing that she gave birth only a few days ago! Until now, there have only been rumors and speculation, but Jenner released a video yesterday showing all the details of her pregnancy and her daughter’s arrival into the world. Including a super secret baby shower in a very special hue.

The now-second-youngest Jenner gave fans a behind-the-scenes look at the baby bash she threw with her nearest and dearest. Footage included in the “To Our Daughter” video showed a very pink backyard celebration that was in epic Kardashian/Jenner fashion.

Complete with long tables, ghost chairs, multi-tiered cakes, and flower walls the shower looked fabulously femme. If you look closely, you can even spot a chocolate fountain. Our favorite detail? Everything was covered in pink — including the expecting mama’s guests, who wore silky pajamas in the millennial shade. Some of the guests even made sure their shoes and nails matched the trending hue. We already know Jenner is a fan of the color (she’s had millennial pink hair, after all) but this was a whole new level of love.

Attendees at the hush-hush gathering included Victoria Villarroel Gamero, Jenner’s assistant, and Anastasia Karanikolaou, an influencer whom you might know better as Stassi along with a slew of Insta-famous faces. Also there to show their love and support were Jenner’s BFF Jordyn Woods as well as Heather Sanders, owner of Sorella Boutique and Jenner’s friend since her sweet sixteen, according to Refinery29. Sanders and Jenner went through their pregnancies together, and Jenner revealed in the video that she and Sanders were four weeks apart on their journeys. Thank goodness Jenner’s pals are so good at keeping their lips sealed!

What do you think of Kylie Jenner’s baby shower? Tell us @BritandCo!

Shea Lignitz
Shea can be found in the nearest bookstore or brewery, exploring the great outdoors, or blasting Led Zeppelin. She grew up in the cold and rain of Northern California's redwoods but is currently wandering around Texas.
Baby Shower
Celeb Style
Baby Shower Celebrity Baby Kardashians