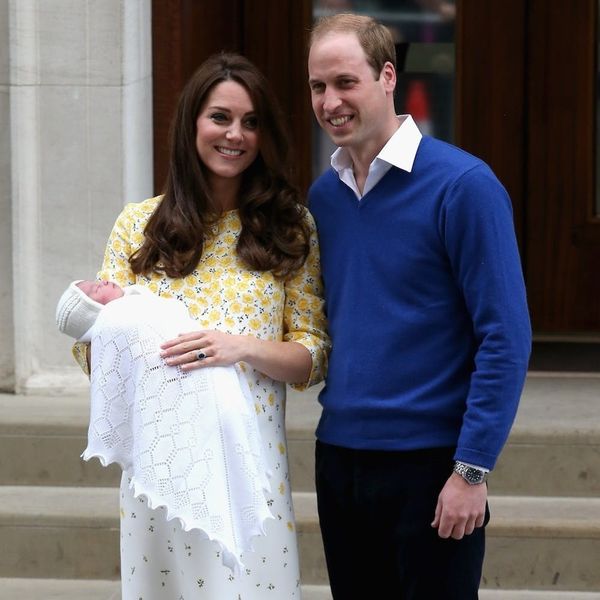 Kate + Will’s newborn baby girl has not only arrived in the world happy and healthy, she is also now headed home. The Duchess of Cambridge gave birth to the little princess at 8:34 AM this morning and is already leaving London’s St. Mary’s Hospital just hours later – and in a gorgeous yellow dress, perfectly curled hair and heels no less! I mean c’mon, is this lady even human?! Whatever her secret is, we kind of need to have it.

The white and yellow shift dress Kate dawned earlier today was by high-end UK designer, Jenny Packham. Packham was also behind that blue and white polka dot dress Kate wore after she gave birth to Prince George. She might not be Queen of England, but we’re going to go ahead and crown her Queen of maternity style.

The newborn (whose name has yet to be revealed) is now fourth in line to the throne. She was born in the Lindo Wing at Paddington, London’s St. Mary’s Hospital and weights 8lbs 3 oz. After the little one finally arrived, those camped outside the hospital got a royal treat when 1-year-old Prince George showed up to meet his little sis.

Rumor has it that the family of four will now be headed to Anmer Hall, their country home on Queen’s Sandringham Estate in Norfolk (about 100 miles northeast of London). After Prince William’s two-week maternity leave has ended, Kate’s mom, Carole is set to help her daughter look after her two kiddos.

What baby name are you betting on? Share with us in the comments below.