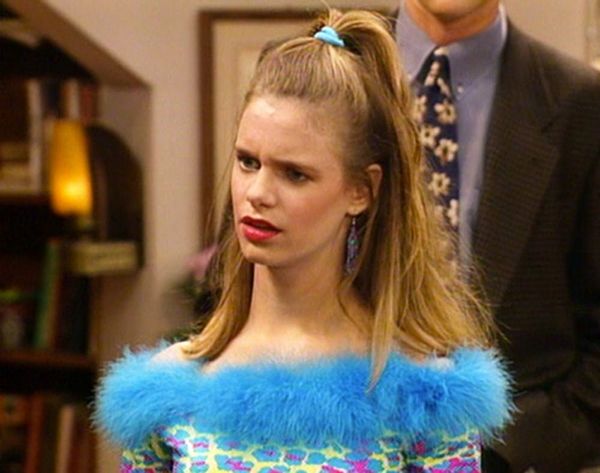 All too often we see grownup stars resenting the roles that shot them to celebrity status as kids. Miley and Hannah Montana. Christian Bale and Jack “Cowboy” Kelly. Mark Wahlberg and Marky Mark. Justin Bieber and… Justin Bieber. The list goes on. Thankfully this unfortunate phenomenon couldn’t be further from the truth for Andrea Barber formerly known as Kimmy Gibbler.

Better step up your game folks, because this girl is Kimmy. (via @JessicaCass13)

To participate, all you have to do is submit a pic of yourself in any one of Kimmy’s outrageous looks and post it to Twitter with the hashtag #KimmyGibblerCostumeContest. So far we’ve seen some pretty dead on looks, but the day is young. We’re expecting some stunners to roll in this evening.

This light up prom dress is everything. (via @mirandajpaulsen)

Kimmy’s fashion reign happened long before this little one was born, but you’re never too young to appreciate the Gibbler’s crazy style. (via @jenny_lives)

The outfit we’ve all been waiting for. (via @LedJesselin)

The winning costume will receive an original script from the “Secret Admirer” Full House episode. If you need a little refresher, that’s the one where Rusty (remember him?) writes a phony letter that sends the house into chaos. Welp, we just added something to our holiday wish list…

If you’re still in need of a costume for tonight, pull out your wildest, brightest clothes, grab some hairspray and teasing comb and get to work! This prize is way better than a bag of Smarties.

If you decide to channel Kimmy Gibbler this Halloween, tweet us a pic too! What entry do you think should win?