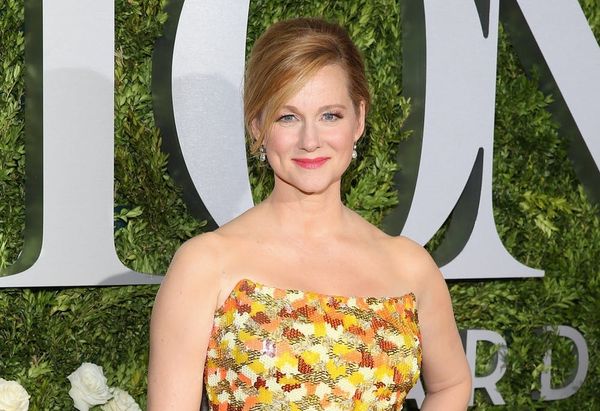 Love Actually has become a (divisive) holiday cult classic since its release in 2003, and for better or worse, it still holds a place in the hearts of many people — including, it turns out, Laura Linney, who played Sarah. Linney appeared on The Graham Norton Show recently and dished some behind-the-scenes info on one of the movie’s most memorable scenes.

In the film, Linney’s character is secretly in love with her co-worker Karl (Rodrigo Santoro). After finally connecting and hitting it off at the company Christmas party, Karl drives Sarah home, but before much can happen between the two, the evening is interrupted by a phone call from Sarah’s brother, who is living in a care facility. Still, before their potential hook up is derailed, Sarah and Karl share a steamy kiss, and as Linney revealed to Norton, it couldn’t have happened at a better time in both of the actors’ personal lives.

“We were both very broken hearted when we made that movie. He had just been dumped, I had just been dumped,” Linney revealed on the Friday, January 17, episode of The Graham Norton Show. “And I remember, the day we were going to shoot the scene, we both sort of slumped to the van. And he was like, ‘Laura, my heart is broken.’ And I was like, ‘So is mine.'”

Their shared melancholy actually worked in their favor, though. “I turned to him, and I was like, ‘Well, all day long, we get to make each feel better,'” she recalled. “And I think there is a sweetness to the scene because of that. We were both very sad.”

She also called the steamy scene the “best kiss in that movie — hands down.”

Back in 2017, fans were treated to a mini-sequel of the film as part of that year’s Red Nose Day fundraising event. The sequel took place 13 years after the original, though, sadly, Sarah and Karl’s storyline was not revisited, as Santoro did not appear.

Linney, however, returned for the US version of the mini-reunion, which aired on NBC on May 25, 2017. In the short, her character is seen answering her phone like in the original, as if it were her brother calling, but it is then revealed that the caller is Patrick Dempsey, who calls her a “wonderful wife.”

Are you surprised to learn this Love Actually tidbit? Let us know @BritandCo!