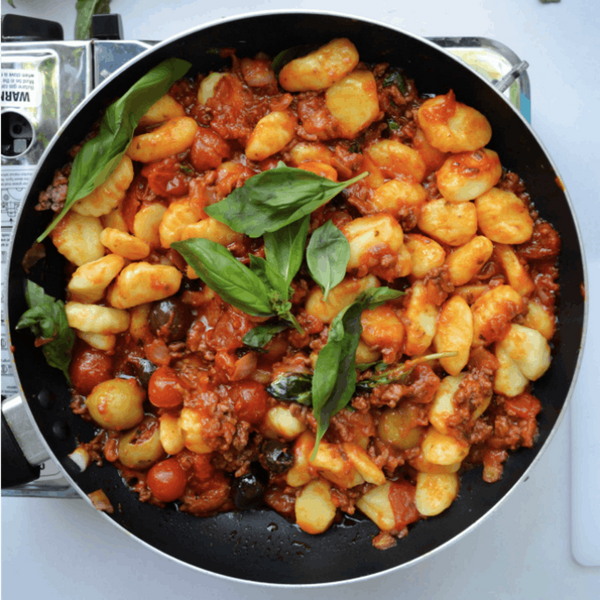 After you go gluten-free, one of the first things you miss is pasta, amiright? Luckily, there are tasty alternatives out there, including rice noodles and chickpea versions. One that’s often overlooked is gnocchi. Traditionally, gnocchi is made of both potatoes and semolina. So when you substitute a GF flour in place of the semolina — surprise! — the starch in the potatoes still provides enough structure to give you the same fluffy pillows of delicious goodness. Here are 13 gluten-free gnocchi recipes guaranteed to become every GF gal’s BFF.

There are like a million+ things you could do with the easy GF gnocchi dough in this recipe — but the brown butter sauce makes such a memorable impression you may never get to the others. (via Simple Roots)

This homemade bolognese sauce comes together in, get this, 20 minutes. (via Milk & Marigolds)

This dish is a complete meal in one — no need to whip up a salad and extra sides — and the caramelized shallots are, in a word, YUM! (via Iowa Girl Eats)

One Skillet Gnocchi With Brussels Sprouts and Chickpeas

Bookmark this one for Meatless Mondays, ya’ll. It will satisfy all the LOVERs in you: carb-lover, veggie-lover, cheese-lover, protein-lover. (via Diethood)

Have you ever had crispy potato tacos with salsa and guacamole? This one-pan wonder tastes a lot like that — but the potato takes the form of fluffy GF gnocchi. (via She Likes Food)

This recipe calls for beets instead of potatoes, which gives the gnocchi a rich red hue. The dough still puffs up nice and fluffy, thanks to the addition of chickpea flour and egg, and the slightly sweet taste is offset by the tart Meyers lemons in the pesto. (via What’s Cooking Good Looking)

Sweet pan-fried pumpkin gnocchi meets bitter chicory and salty bacon — all brightened with a squeeze of lemon. (via The Bojon Gourmet)

This sausage and gnocchi dish takes “meat and potatoes” to a whole new level. Use store-bought GF gnocchi, and it’s ready in just 10 minutes. (via Iowa Girl Eats)

While technically gnocchi is an Italian invention, it tastes SOOOO great with spicy Mexican seasonings. The creamy avocado salsa in this recipe adds a delicate kick. (via She Likes Food)

Feast your taste buds on this GF gnocchi gloriousness made even puffier with the addition of ricotta cheese. (via Grain Changer)

You had us at “loaded.” This dish has all the flavor you’ve come to expect in a loaded baked potato, but served up on soft clouds of gnocchi heaven. (via With Salt and Wit)

If butternut tater tots and gnocchi had a baby, it would look something like this. (via My Life Cookbook)

This carrot gnocchi recipe is a blissed-out, orange-hued healthier take on the classic. The dough calls for nutritional yeast, which gives it a yummy salty-cheesy taste, even though it’s 100 percent vegan. (via Blissful Basil)
Sally Jones
Sally Jones is a writer and editor living in New York City. She has worked at many websites including iVillage, Ladies Home Journal, More, Parenting, Cosmopolitan, The Knot and YourTango, in jobs ranging from editor to COO. Renovation and interior design are her unhealthy obsessions hobbies. She has renovated every home she's lived in, including the rentals, and like... whoa, who does that? You can catch her at her blog Renov8or.
Gluten-Free
Healthy Eating
Gluten-Free Healthy Recipes Pasta Recipes recipe roundup
The Conversation
Reviews:
More From Healthy Eating