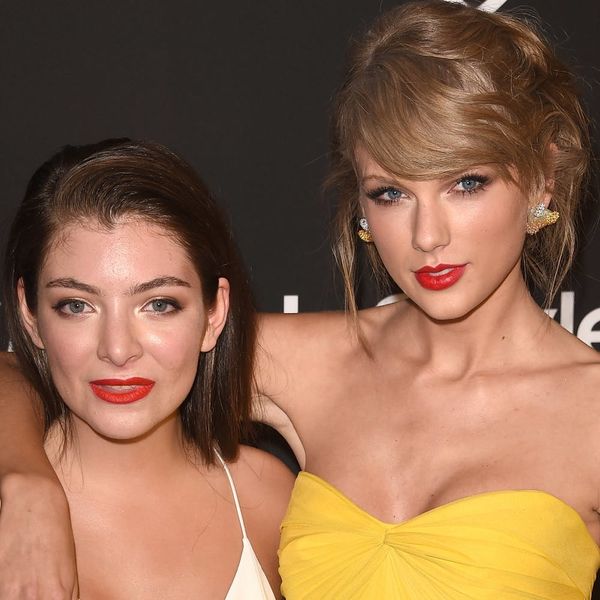 Lorde can’t catch a break when it comes to discussing her relationship with pal Taylor Swift! Last month, the 20-year-old drew some serious ire from fans when she compared being friends with a famous person to having a friend with an autoimmune disease, saying, “It’s like having a friend with very specific allergies. There are certain places you can’t go together. Certain things you can’t do. There are these different sets of considerations within the friendship.” While she didn’t name Swift directly, many filled in the blanks for her, causing the singer to issue an apology via Twitter.

Now, she has people buzzing again after a new interview with Sunrise in Australia seemed to suggest that she and the “I Don’t Wanna Live Forever” crooner may not be quite as close as their paparazzi shots would lead us to believe.

When the subject of her high-profile friend came up, Lorde gave a rather surprising answer to the question of her Swift squad status.“What was it like sort of observing all of those heroes of yours and then starting to mix in those circles? Tell me how you coped with that?” interviewer David Koch inquired.

Laughing, Lorde tells him, “The second you think too hard about it, you’ll just go insane, so it’s best to be like, ‘We’re in Wonderland,’ and that’s just what happens around here,” before adding a very pointed note: “Like, also, I don’t hang out with these people at all,” she quipped. Koch wasn’t having it, coming back with, “Hang on: You’re part of Taylor’s squad. All the magazines tell us.”

Whether she was merely treading lightly after last month’s snafu or wasn’t exactly comfortable with that label, the “Green Light” singer made a pinched face, slightly rolling her eyes before managing to say, “I mean… you know, you make friends in different places, but I think for the most part, I’m not like, calling up my idols for advice necessarily.”

Whether it meant that Swift wasn’t one of those idols (Lorde later cited her parents as her mentors) or that she wasn’t really a member of Swift’s famous squad, people were instantly buzzing about whether there was trouble in friendship paradise for the dynamic duo.

We didn’t have to wait long to find out, as several hours ago, Lorde took to Twitter to shut down any misconceptions that might have arisen from her words, saying that the clip had been edited down and taken out of context.

“Wow. Something of a frustrating thing to have to address online, but here we go,” she began. “In the interview in question I had just been talking about Bowie and Patti Smith — those were the “idols” I was referring to that I was saying I’m not friends with, not Taylor!”

She continued on to address that eye roll, saying that she’s frustrated by people’s fascination with the whole “squad” concept. “It was never some exclusive club or secret society, but a wide circle of people, some of whom I know, and some who I’ve never met, like most wide groups of friends. Forgive me for the mild eyeroll I popped when it was brought up as if we’re all blood members of a secret cult.”

As for her and Tay’s relationship, however, Lorde says the two are quite close, thank you very much. “I want to say one more time that Taylor Swift has been there for me in all my light and dark moments these past five years. All of them. I feel truly terrible that it would ever seem that I wasn’t faithfully her person. I f*cked up in an interview question. Now go sip a beverage and head out for a walk.”

We forgive you, Lorde… and we’d be willing to bet a friend like Taylor does too!

Was Lorde throwing shade or were her comments taken out of context? Tell us over @BritandCo.

Nicole Briese
Nicole is the weekend editor for Brit + Co who loves bringing you all the latest buzz. When she's not busy typing away into the wee hours, you can usually find her canoodling with her fur babies, rooting around in a bookstore, or rocking out at a concert of some sort (Guns N' Roses forever!). Check out all her latest musings and past work at nicolebjean.com.
Controversy
Celebrity News
Controversy Taylor Swift twitter
More From Celebrity News