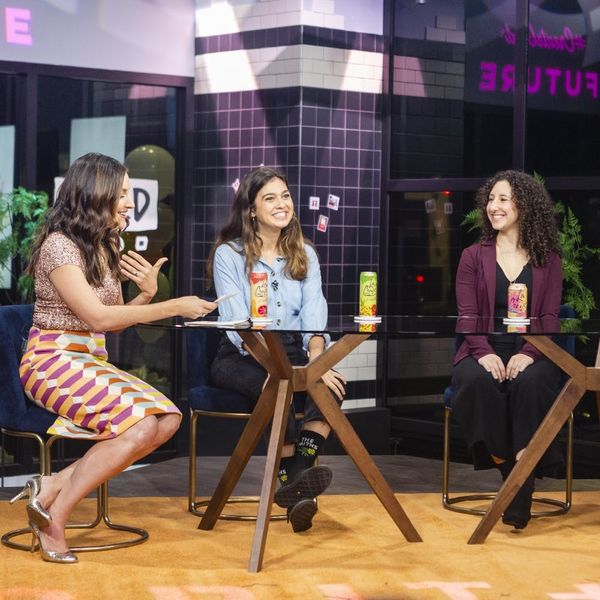 The panel was streamed live from New York City’s Build Studios at 7pm ET, but if you missed it in real time, you can watch the entire thing below, or catch up on all the highlights in our recap. And don’t forget to tune in Tuesday through Friday at 7pm ET for more incredible guests and panels.

Brit Morin got things started by defining the mission of #CreateGood.

Brit + Co founder and CEO Brit Morin set the tone for the week-long event with a speech about the importance of, well, creating good in the world. Acknowledging the #MeToo movement and the record numbers of women running for office, Brit encouraged attendees and viewers to become the change they want to see.

“Over the next five nights, we have constructed thought-provoking panels and conversations, all aimed to help women get inspired to create something new in their lives for the better — for good,” she told the crowd at Build Studios. “With themes ranging from creating good style to creating good hustle, we want to encourage women to take their passions and make them real. We want to teach them how to have a voice and to learn something new. We want them to feel like they have the power and skills to create. And mostly, we want them to not only feel inspired, but to take action.”

Karp, a stand-up comedian who has her own show at the Upright Citizens Brigrade, uses humor to address important issues such as politics and activism. She’s especially vocal about women’s rights and the importance of intersectionality when we talk about those rights.

“I think my generation has a very strong hold on the problems with feminism 10 years ago and where we are with feminism now,” she said. “I think our generation is now aware that we have to make sure everyone is aware that feminism should be intersectional, and it is for everyone, [including] people who don’t identify as male or female. Feminism is different for everyone, feminism affects people in different ways, and I think we have become very aware of that and very conscious of our privilege and where we are coming from and who we’re talking to when we are talking about feminism.”

Haile Thomas spoke about the power of food to change your life.

Thomas, who is the youngest certified integrative nutrition health coach in the US and runs a nonprofit called HAPPY (Healthy Active Positive Purposeful Youth), was inspired to get educated — and educate others — about wellness and nutrition, after her dad was diagnosed with type-2 diabetes.

“Food truly is powerful in healing the body, hurting the body, and also unlocking our best selves, ultimately,” she explained. “I was learning all of this at 8, and I was very overwhelmed by all the information. I felt kind of betrayed by the entire food system, but at the same time, it was empowering to know that my choices really do matter and make a difference in how I feel and how I live.”

Alexandra Lehman stressed the importance of kindness and empathy, even — or especially — when you disagree with someone.

Lehman is the founder of Coalition Z, an organization dedicated to amplifying the voices of politically minded youth and engaging them in democracy, even if they’re not old enough to vote. Speaking about how her parents influenced and fostered her passion for activism, she shared what they taught her about compassion — a lesson we should all carry with us, particularly in this charged climate.

“I think the most important and transformative lesson my parents instilled in me since I was very little has been to be kind to anyone, no matter who they are, what they do, or what they believe, and to develop perseverance and grit, so when something is difficult, you work through it,” she said. “Having that as the foundation upon which I can serve as an activist has allowed me to develop a platform that is based on empathy and a desire to listen to others and to find points of connection. And I think we really need that, more so now than ever.

After a special video message from Karlie Kloss to the #CreateGood audience, Brit sat down with Ellie, Anum, and Victoria, three girls from her Kode With Klossy program, which hosts coding summer camps for girls aged 13 to 18 to empower them to become leaders in tech.

“Coding is a superpower that anyone can obtain. It’s the reason we can talk to computers and get a response back, it’s the reason we can search on Pinterest for DIY projects or talk to our best friends on Instagram. It’s just as simple as throwing a few commands in and getting a really cool response out of it.”

Asked for some tips about running a company, Grossman, the CEO and president of WW (formerly Weight Watchers) offered up this nugget of wisdom: “I talk a lot about the transformational power of believing in yourself. What has empowered me to take the risks and do the things I want, because I passionately believe it, is I believed in myself. I believed in myself when other people were skeptical, and it’s really important, because who’s going to believe you if you don’t believe in yourself?”

After serenading the audience with a gorgeous performance of her single, “Going, Going, Gone,” Poppe, the most recent winner of American Idol, marveled at how drastically her life has changed in the last year. She also shared her advice for other young girls with big dreams.

“Some advice I would give to somebody wanting to follow their dreams is to never give up,” she said, recalling how she almost turned down the chance to audition for American Idol in October 2017. “I just didn’t know that one ‘yes’ was going to change my life forever. You never know how close you are. I was told ‘no’ hundreds of times before American Idol. You gotta do what makes you happy. And be yourself, because that will take you a long way.”

Tune in tomorrow for #CreateGood Art Night, livestreamed here on Brit + Co and on the Brit + Co Facebook page.