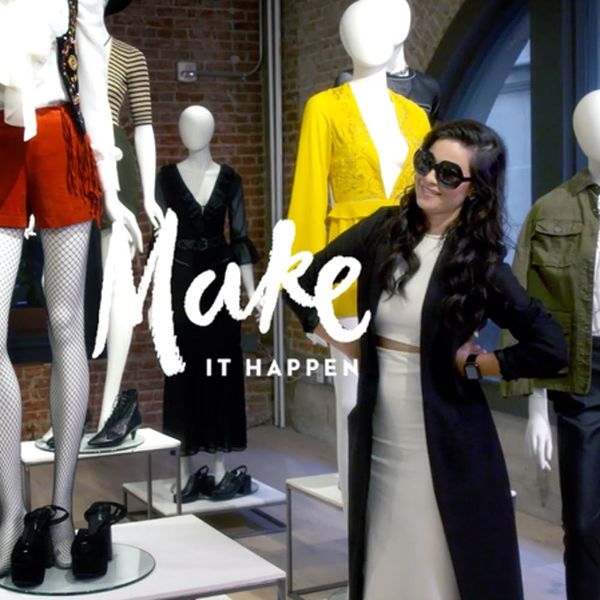 Nasty Gal founder Sophia Amoruso and YouTube singing sensation Kina Grannis epitomize modern-day creatives: resilient, strong and in a league of their own. That’s why when filmmaker Joseph Garner was tasked with capturing both ladies’ inspiring stories for our Make It Happen docu-film series, he knew keeping their original POVs in mind was essential. “As a whole, these pieces showcase some truly remarkable women who are following their passions to achieve success. Each story needed to be different and told in a way that would somehow reflect who they are individually,” says Garner. “I wanted the film to be a small window for the audience to get inside the minds of these talented and creative women.”

Our four-part series celebrates women who took the plunge and made their creative dreams come true, with the first episode focusing on Sophia’s story. Here, we chat with Garner to get behind-the-scenes gossip, his advice for aspiring filmmakers and the movie that blew his mind.

What was the most surprising thing about working with Sophia? And Kina?

When I first started doing my research on Sophia. I was immediately taken in by her fierce attitude of how she approaches her life. Her ability to roll with the punches and constantly reinvent herself and her business, while at the same time still maintaining her unique and personal vision, is truly remarkable. She is a person who knows what she wants and doesn’t follow any “cookie-cutter” way about getting things done.

I first met Kina through my brother, Michael, who is a fellow musician. Kina is the quintessential definition of talent plus hard work equals success. She is clearly a gifted singer and songwriter. Her songs and videos have received over 177 million views on YouTube alone. But none of that would have happened without her complete dedication to her craft and her appreciation of fans. She works incredibly hard for all that she has achieved, and by my account, she truly loves what she does.

Tell us a little about the Make It Happen video series. What approach did you take to put your own original spin on this?

When I was first approached about directing for this series, I was excited to explore a new platform… I really spent a lot of time researching them so I could get a better understanding of their unique story and try to get to the essence of what drives them to do what they do. I wanted the films to be a small window for the audience to get inside the minds of these talented and creative women.

Where is the coolest place you’ve traveled on a shoot?

It would have to be Bangkok when I was working on The Hangover Part II.

What advice do you have for aspiring filmmakers?

Making a film is a labor of love. It has to be something that you’re willing to dedicate every ounce of your energy and time to achieve. And that can be tough, especially given the reality of life — whether you’re in school, working your day job, family commitments, making time for friends, financial obligations and all the other exciting things about being alive in the world today. But with the advancements of technology and the numerous platforms to showcase your work, being a filmmaker is entirely possible. The first step is just deciding you want to do it and figuring out how to make it happen. Don’t worry about big budgets or elaborate sets; start with a story you feel passionate about, learn how to edit and start rolling!

What’s your next project?

I’m currently in post production on a feature film for Warner Bros. It’s directed by Todd Phillips (The Hangover movies) and stars Jonah Hill and Miles Teller. I am also considering running for Congress in Ohio and making a documentary about it, but we’ll see if that happens.

Who is your dream subject?

How has technology changed the way you do your job?

Technology continues to evolve every aspect of human life, including filmmaking. The quality of the camera in an iPhone is better than 90 percent of the video cameras from 10 years ago. It also enables everyone to have an equal voice. Filmmakers on YouTube can be just as big and influential as movie stars and reach just as many people.

What affordable apps and equipment do you recommend to aspiring filmmakers?

If you can get your hands on good editing software, that’s where I would start. Adobe Premiere is pretty great these days and Final Cut X is a good affordable one as well. Cameras that shoot in HD and can create shallow depth of field will give you more of a “film look,” but the equipment is never as important as the story or the characters in my opinion.

What film changed your life?

It’s called Copywrite and it’s a beautiful short film by Steph Green that I saw in 2001 or 2002 and it blew my mind in a good way. I also really loved Inside Out.

If you were a filmmaker, who would you most want to profile?

Andrea Kasprzak
Andrea Kasprzak has worked in lifestyle media for the past decade, interviewing everyone from teen pop stars to pro surfers. Her current obsessions include kundalini yoga, adventuring all along the California coast and editing her YA novel.
Lifestyle