The Rebirth of Maria Menounos: How She’s Living Her Best Life After Surgery 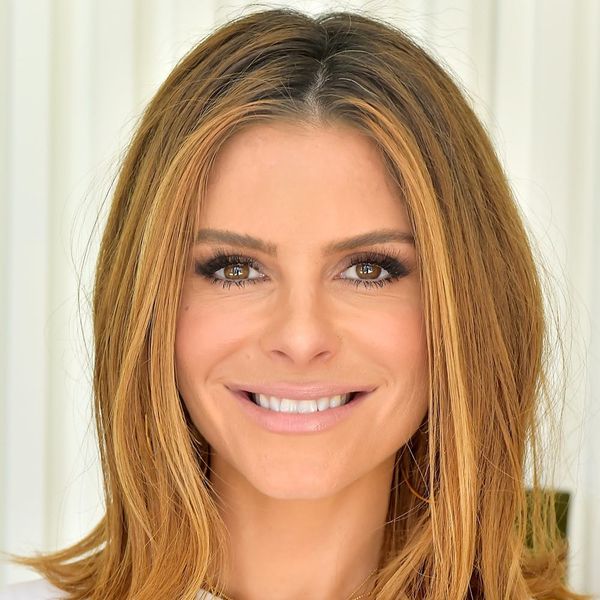 It’s been a hell of a year for Maria Menounos. Ten months ago, on her 39th birthday, the radio host underwent a massive seven-hour surgery to have a golf-ball sized growth removed from her brain. Though the meningioma tumor proved to be benign, the health scare was a huge wakeup call for the uber-busy Hollywood front woman. Today, just two months shy of her 40th birthday, she’s in Chicago for the Rally HealthFest, helping to spread the word about the importance of self-care.

“Focusing on my health as much as humanly possible right now is the biggest deal for me,” she tells us. “My annual physical is now a very important part of my life.”

It’s the very reason Menounos is here alongside actor Kevin Hart, surprising gym-goers at the Midtown Athletic Club. “Health is such an important part of our lives, and we just want to encourage people to take it into higher consideration… especially women, because we put ourselves last so [often], and we’re so busy taking care of everybody else that we rarely have time to take of ourselves… [and] when you do, you feel guilty.”

The sentiment is especially true for the red carpet host, who was busy aiding her mother, Litsa, in her battle with stage-four brain cancer when she learned of her own diagnosis. “I’m definitely more still and more aware of what’s going on in my body,” she shares.

But that’s just the beginning.

Almost everything about the New York Times best-selling author’s life has changed since she went under the knife. She’s a newlywed, for one. After 20 years with boyfriend Keven Undergaro, she’s wearing a gold “Wifey” necklace around her neck, having tied the knot on live TV during New Year’s Eve With Steve Harvey. “It’s just super, super mushy gushy again,” she says with a smile. “It’s nice when that love bomb hits.”

She’s also got a brand new look. On the 10-month anniversary of her surgery, the LA-dweller’s hairstylist, Dimitris Giannetos, chopped six inches off her famous locks — a move she’s been itching to make for years. “I’ve been under contract for all 18 years I’ve lived in LA, and with that comes restrictions,” she explains. “[This] business is amazing and I’m very blessed to have the career I have, but at the same time, there are some ugly moments along the way. For some reason, people really LOVED controlling me through my hair.”

Now a free agent, Menounos is experiencing a type of autonomy she’s never known before — the freedom to be herself. “Kevin was telling me that the Indians would chop their hair as rebirth and it makes sense — I feel like I’m free to be me for the first time in my life. I can make any decision I want. I can DO what I want. If I want to go post a naked picture on Instagram tomorrow, I can. Nobody’s stopping me! Except Instagram,” she jokes. “I feel like that’s such an important thing in life. To feel free. There’s no more important time in my life to do that than now.”

It’s not the only thing she’s doing for the first time — the actress has also taken up a brand new and unexpected hobby in guitar. After reading that playing the instrument can be good for neural pathways, she dove in headfirst, taking up lessons three times a week and even teaching herself to play ambidextrously. “I just learned how to play “Boulevard of Broken Dreams” by Green Day, she says proudly. “I love it — it’s so much fun. I’ve never had time to take up a hobby. I’m doing all the things I’ve never done in my life.”

New episode of Conversations w/Maria Menounos is on @ApplePodcasts ! Meet "The Iceman” Wim Hof who broke 26 Guinness World Records by learning to control his autonomic nervous system (something scientifically impossible). + Hear Julian Lennon discuss his new book “Heal the Earth” & my revelation about a conversation he shared with his father John Lennon.

That includes calling the shots when it comes to her career. Every day now, the WWE host and performer hosts her Sirius XM radio show, Conversations With Maria (also available via Apple Podcast) from the studio her husband built in their home. “Nobody’s telling me what to do, which is awesome. I get to pitch myself all these amazing ideas and approve them and nobody’s telling me my ideas are stupid.”

As a result, she’s finally getting to live her lifelong dream. “My whole life, my dream was to have a talk show,” she confesses. “I wanted to be able to help people, like Oprah-esque… When daytime TV collapsed, I was like, ‘Oh gosh, oh no, where does that dream go?’”

As it turns out, not too far. “It took me until two months ago, on the air live to have the revelation that I actually have my talk show.”

Tackling everything from tips on how to care for woman’s best friend (“Everything we do for ourselves we need to be doing for our dogs”) to methods for dealing with the loss of a loved one with guests such as Entourage star Emmanuelle Chriqui, who lost her mom to cancer at age 16, the longtime news correspondent is doing exactly what she set out to do. “Every day my goal is to make sure someone either learns something or takes something that’s gonna inspire them [throughout] their day.”

It’s the same goal she has as an ambassador for Rally. “These events are important because you get out there, we see people, we can motivate and inspire and help guide them to making better, healthier decisions in their lives.”

She’s quick to note, however, that health advice is not one size fits all. While there are some universal tips she’s happy to offer (“incorporate your health into things. Feed yourself good fuel. Go to the doctor for your exams.”), others are more personal.

It’s a conversation she’s had with other ambitious women like Arianna Huffington, author of The Sleep Revolution: Transforming Your Life, One Night at a Time ($16). Menounos wholeheartedly agrees with Huffington’s vision and the importance of sleep, but she also knows the struggle of balancing shut-eye while building a brand. “She’s like, ‘sleep is so important,’ and I’m like ‘You would not be Arianna Huffington — you would not have the empire you have if you were sleeping all the time!”

The same rings true for Menounos. While she has been vocal about her belief that the stress associated with her career has impacted her own health, she says it’s that same pressure that’s gotten her to where she is today. “Even though it resulted in brain tumors, and brain surgery, and all [of] these things, I wouldn’t rewind and change anything, really, other than to let myself know not to sweat certain things as much because it’s all kind of gonna lay out in a way that’s gonna be for me and for my benefit,” she muses. “Even all… the struggles, even all those controlling hair moments, like EVERYTHING [was] laid out the way it was supposed to to get me to realize what’s really important in life.”

How do you balance work with your health needs? Share over @BritandCo.

Nicole Briese
Nicole is the weekend editor for Brit + Co who loves bringing you all the latest buzz. When she's not busy typing away into the wee hours, you can usually find her canoodling with her fur babies, rooting around in a bookstore, or rocking out at a concert of some sort (Guns N' Roses forever!). Check out all her latest musings and past work at nicolebjean.com.
Celebrity
Health
Celebrity Healthy Living Sleep Womens Health
More From Health