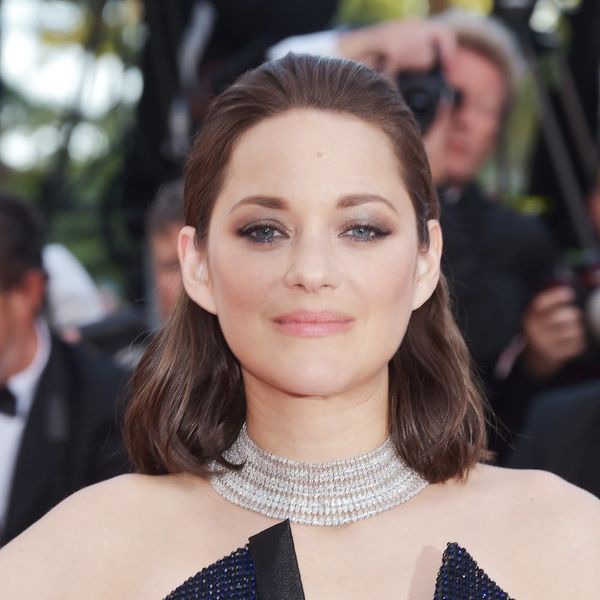 We’ve been admiring Marion Cotillard’s chic French-girl style since she burst onto the international scene back in 2003 with Big Fish. While she’s changed up her look a bit since then, donning everything from gamine bangs to a wavy bob, the one thing that’s remained largely consistent has been her signature brunette locks. Now, the actress has been spotted out and about in Milan rocking braids in a totally different hue.

The new mommy‘s tresses are now a very natural-looking blonde, and she looks like an entirely different person! Going for a more blended look than say, Kim Kardashian West’s recent platinum transformation, the style means that maintaining it will be pretty effortless, since it’ll look intentional when her roots start showing. As celebrity hairstylist Larry Sims said of the switcheroo, “This definitely works for the everyday woman. I love the color. The dimensions, blend, and depth complement her skin tone.”

#MarionCotillard is making everyone at fashion week in #Milan green with envy 💚 (📷: Splash News)

She debuted her new look in the form of messy braids, which she paired with a puffy sleeved, lime green WHYRED power suit, a few pieces of geometric jewelry, a black handbag, Louboutin pumps, smudgy eyeshadow, and a nude lip.

From what we can tell, it’s the first time she’s worn the shade since 2005, when she made the seemingly permanent switch to her now-renowned dark hair after years of life as a curly-haired blonde.

Seriously, is there any hair color this woman CAN’T pull off?! *Swoon*

What do you think of Marion Cotillard’s new look? Tell us @BritandCo!