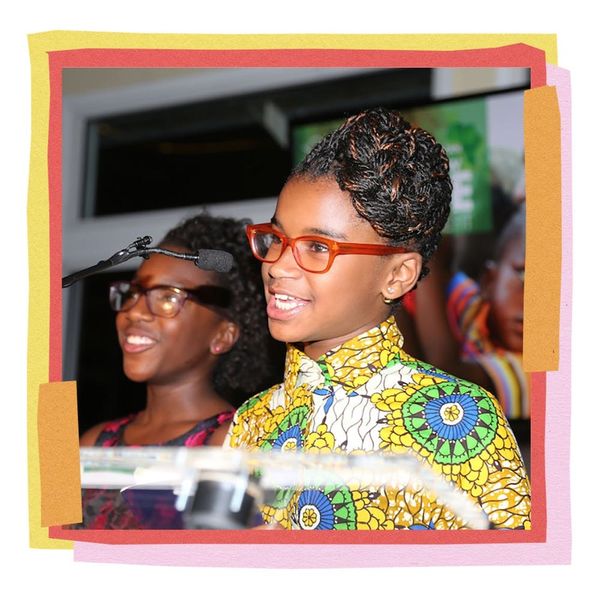 Marley Dias learned to read when she was only two years old. She’s a voracious reader and self-proclaimed book nerd. But when Dias was 11 years old, she noticed that most of the books being taught at her school were about “white boys and their dogs.” So, she did something about it. In 2015, Dias launched #1000BlackGirlBooks.

With her initial goal to collect and distribute 1,000 books featuring Black girls as the lead character having been surpassed more than tenfold, Dias has now gone on to write her own book, Marley Dias Gets It Done: And So Can You, a guide teaching other kids how they can become activists and create change in their own communities.

Now entering her first year of high school, Dias is showing no signs of slowing down — at least not until “we can create diversity and equity in institutions and in school curriculums,” she tells us. Here, the 13-year-old shares more about her campaign, her aspirations for the future, and what it was like writing a book of her own.

B+C: Initially your #1000BlackGirlBooks campaign was intended to run until you found 1,000 books where Black girls are the main characters. But now you’ve collected 12,000 books and the initiative is still going strong. When did you realize this was something with lasting power?

Dias: I think I first realized that when I spoke to a bunch of superintendents in New York State Schools. They were very impressed and I convinced them why it’s really important to have diversity in books. It showed me that I wasn’t going to be able to just solve this problem in my school, but that it was going to extend beyond New Jersey and my school district.

B+C: Going off that, why do you think it’s important for adults to listen to the opinions of kids?

Dias: First of all, we are sponges to the world around us. There are little things that parents and adults do that every kid can absorb. So, it’s important that you spread messages of positivity and acceptance of everybody to young kids because — second point — we are the future. The things that we absorb when we’re younger, they affect how we treat others as we grow up.

B+C: Why do you think it’s important for young Black girls to see themselves as main characters in books?

Dias: It’s important because it develops a sense of identity. I think that you can tell already that I’m articulate in what I have to say. I’m clear and I know my opinions and I can express my opinions because I always saw other young Black girls in books doing that. I never felt like I wasn’t capable of being an archaeologist or a doctor or an activist or a singer because I knew that there were stories out there and people out there in the world — whether they were made up or not — who had done those things as young Black girls. I think it encouraged me to be like, “Marley, even if this is hard, even if this is difficult, you know that Velma in One Crazy Summer, she was able to do that. So, you can do that too. You know that Jacqueline in Brown Girl Dreaming was able to stand up to a student who was making fun of her. So, you can too.” I think one of the things people really value about the campaign is seeing their children — their Black children — feel like they have so much more potential.

B+C: What do your friends think of all the work that you do?

Dias: A lot of my friends who are Black or people of color can very much understand what that struggle was and now they get to see the improvements, even in our own schools. And for my white friends, they get to understand more of the social action part about expressing your voice. I teach them, “This is what it’s like. This is hard. You can use your power that you have to help others.” I show them the campaign is a mix of all of that. My Black identity and me as a Black girl, it allows for my social justice to be able to come together and it allows for my voice to be able to be heard.

B+C: Speaking of you and your friends, what characteristics do you think Gen Z has that other generations don’t?

Dias: I think we’re innovative when it comes to technology and creative about the ways that we share our ideas. Being a performance artist or a spoken word poet, all these things already have existed, but I think that the access to technology that everybody has now uplifts all these ways of self-expression. That’s something I get to witness even in my school and even online. That’s really exciting.

B+C: You’ve done so much in the book realm, but this year you wrote and published your own book, Marley Dias Gets It Done: And So Can You! What was that experience like?

Dias: Writing Marley Dias Gets It Done: And So Can You was a really fun experience. It was difficult, though, because I wrote it during school. I don’t think everybody realizes that I still go to school. Writing it was really tough but also so rewarding, because I think that the book is now just something that people can physically hold to see the representation of all my ideas. I don’t think Scholastic knew I had so many other ideas, but I’m happy that we were able to get basically all of them into the book.

B+C: What do you have coming up that you’re excited about?

Dias: I start high school soon. I’m excited for that! As far as activism, I think the next thing is the 1,000 Black Girl Books app. We have a resource guide already online that has 1,000 of the books that have been collected with the campaign. So, I’m excited to make that digital so we can support local authors and make sure that their stories can be bought on Amazon or that people have more access to these other stories.

B+C: What’s the big dream for you when you grow up?

Dias: The big dream… I’d like to be a stage producer or a field producer. I’d like to be working in TV and directing and writing. I like that stuff a lot. Ava DuVernay wrote the introduction to my book. She was one of the first people to really invest in 1,000 Black Girl Books, so I got a lot of inspiration from her and what she does.