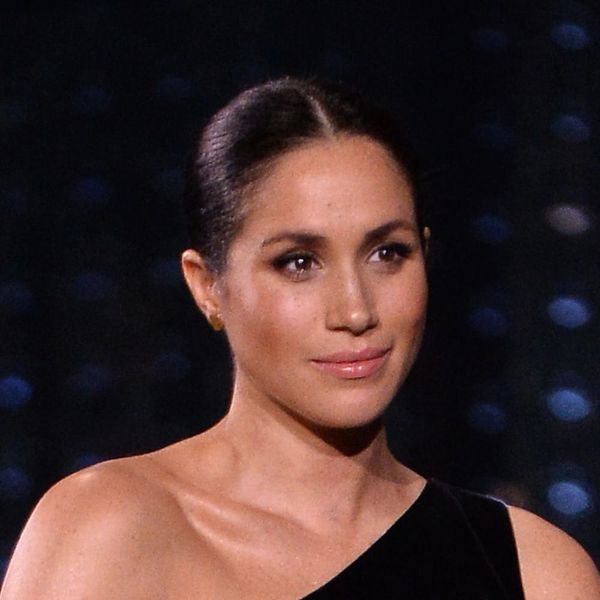 In a surprising turn of events, Meghan Markle made an appearance at the British Fashion Awards at Royal Albert Hall in London on Monday, December 10. Radiant as ever, the Duchess of Sussex showed off a flawless pregnancy glow and a welcome departure from her signature, perfectly-imperfect hairstyle. (Photo via WPA Pool/ Getty)

The Duchess of Sussex, who announced her pregnancy with husband Prince Harry in October, almost always wears her hair (either in a loose updo or ponytail) with face-framing tendrils. At the awards, however, Markle went with a smooth bun, parting it straight down the middle and adding a high-shine gloss to top it off. To complete her polished look, she wore a black Givenchy gown with gold Tamara Mellon heels and matching statement cuffs by Pippa Small. (Photo via Jeff Spicer/BFC/ Getty)

Markle presented Clare Waight Keller, artistic director of Givenchy and designer of her wedding dress, with the British Womenswear Designer of the Year award. “As all of you in this room know, we have a deep connection to what we wear,” Markle said on stage. “Sometimes it’s very personal, sometimes it’s emotional. But for me, this connection is rooted in really being able to understand that it’s about supporting and empowering each other, especially as women. When we choose to wear a certain designer, we’re not just a reflection of their creativity and their vision but we’re also an extension of their values — of something in the fabric, so to speak, that is much more meaningful.” (Photo via Joe Maher/BFC/ Getty)

Which royal hairstyle is your favorite? Tell us @BritandCo!

Jen Hussein
Jen is the poster child of a style & beauty junkie — from the latest eyeshadow palette launch to the wildest moments from NYFW, she's one of the first to know about it. As a proud public school graduate from SUNY New Paltz, her work has been featured in top publications such as PAPER Magazine, INSIDER, and COOLS. When she's not swatching the latest highlighters and lipsticks, she's busy being a cat mom, sipping on rosé, and binge-watching Netflix cooking shows.
Celebrity Beauty
Beauty News
Celebrity Beauty Celebrity Hair Royal Family
More From Beauty News