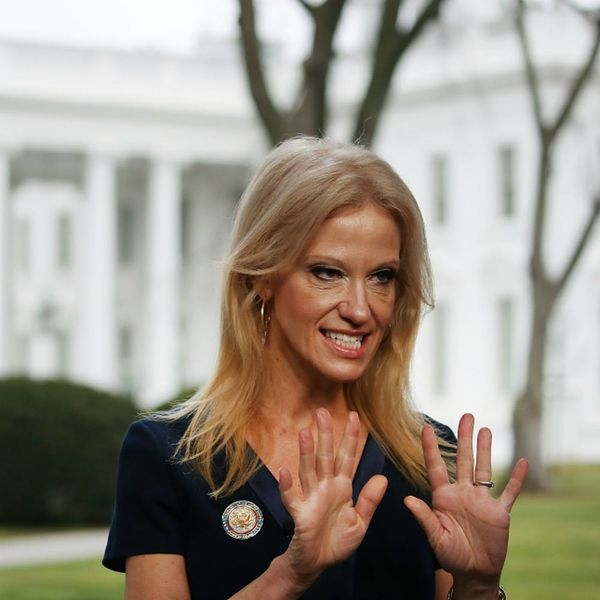 It sometimes seems as though political figures on television are living in an alternate reality. With the recent inauguration of President Trump, we’ve got an all new administration to watch on the news cycle. One such figurehead is President Trump adviser and spokeswoman Kellyanne Conway (who donned a rather Paddington-esque ensemble to the inauguration), who seems to be leading the charge on confusing the press.

This weekend, after Press Secretary Sean Spicer held a press conference to dispute some of the reported facts regarding the attendance size of the inauguration, KellyAnne had a press interview of her own. She appeared Sunday on Meet the Press, and after host Chuck Todd confronted her with Sean’s easily refutable statements, KellyAnne said that Sean’s comments were not a “falsehood” or “lie,” but merely “alternative facts.” The term didn’t sit well with many, including Merriam-Webster, who wanted to remind us of all of why it’s important to always check the dictionary before you try and explain a word’s meaning.

📈A fact is a piece of information presented as having objective reality. https://t.co/gCKRZZm23c

While Merriam-Webster didn’t expressly call out KellyAnne for her misuse of language, they subtly linked to their own website, where searches for the dictionary meaning of the word “fact” spiked after her interview.

It’s fascinating to see how comfortable KellyAnne is with presenting her alternative reality, but we guess that’s why she has the job she does. Granted, the idea that a lie is just an “alternative fact” is more than a bit scary coming from the highest office in the land. Hopefully, more journalists will call to question the office’s insistence on using this language to push their agendas.

What do you think about Merriam-Webster’s shady tweet? Tell us @BritandCo!