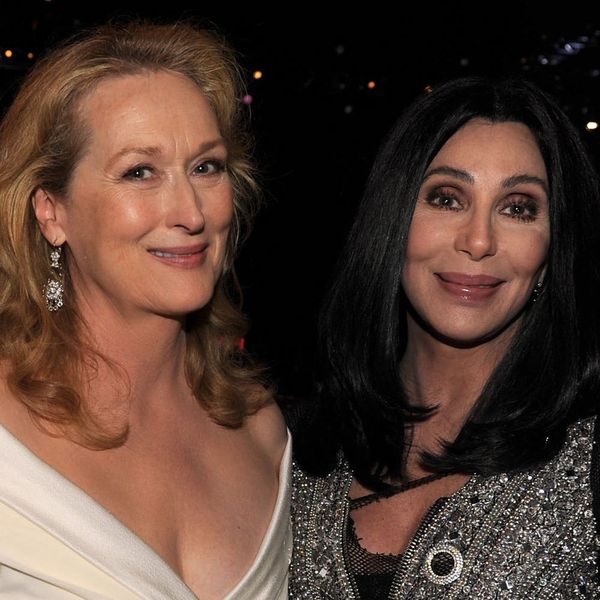 Don’t mess with Meryl Streep and Cher! We already knew that these two Hollywood legends were powerhouses (who could forget Streep’s words for Karl Lagerfeld in the wake of her Oscars dress controversy?), but our love for the duo grew tenfold this week, when Streep recalled the time that the two once teamed up to take down… a mugger?!

At the International Press Freedom Awards in New York on Wednesday, the Mamma Mia! Here We Go Again star addressed the current social awakening regarding violence against women, recalling the two times she dealt with abuse herself.

“I do know something about real terror,” she began. “The two times when I was threatened and dealt with real, physical violence, I learned something about life that I wouldn’t have known otherwise. And I was lucky, because my instincts served me well. In one instance, I played dead, and waited until the blows stopped.”

Streep, 68, then went on to describe a second instance, in which she and Silkwood co-star Cher helped another woman in need. “In the second instance, someone else was being abused, and I just went completely nuts and went after this man,” she revealed, adding, “Ask Cher, she was there.”

The duo’s courage was enough to save the victim: “And the thug went away. It was a miracle.”

Cher, 71, actually confirmed the story herself years prior, telling Us Weekly back in 2013, “Meryl Streep and I saved a girl from a large mugger in New York City.”

The badass team-up was enough to have Twitter in a tizzy, with fans taking to the social media site to sing their praises.

Meryl Streep and Cher once saved a woman from a mugger.

This is the crime-fighting duo I never knew I needed.https://t.co/uUwHkxhyZu

Imagine being mugged and Meryl Streep and Cher swoop in to save you. Nothing but respect for my superheroes pic.twitter.com/oFbKFrkgGL

That time Meryl Streep and Cher stopped a mugging in NYChttps://t.co/IPqqvHVxRC

THESE LADIES DON'T MESS AROUND. 👏👏👏

Still, the speech was no laughing matter, with the acting legend going on to reveal how the incidents affected her.

“I was changed by these events on a cellular level, because women do know something particular about coming to the danger place… We come to it, disadvantaged, through the many millennia proceeding our present moment. And because of our vulnerability, we anticipate danger… we expect it.”

Kudos to Meryl and Cher for standing up for another woman in her time of need.

What do you think of Meryl’s story of bravery? Share with us @BritandCo.

Nicole Briese
Nicole is the weekend editor for Brit + Co who loves bringing you all the latest buzz. When she's not busy typing away into the wee hours, you can usually find her canoodling with her fur babies, rooting around in a bookstore, or rocking out at a concert of some sort (Guns N' Roses forever!). Check out all her latest musings and past work at nicolebjean.com.
Celebrities
Celebrity News
Celebrities Friends