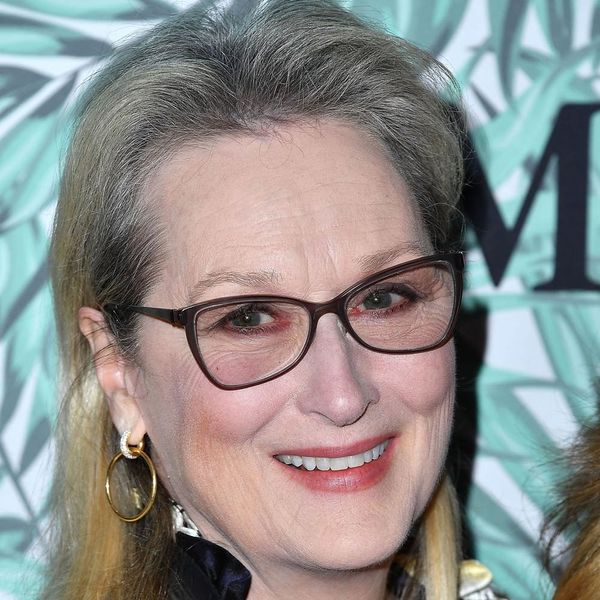 With just days to go before the Oscars (they’re finally here — eeeee!), Chanel head designer and creative director Karl Lagerfeld dropped a bombshell about a red carpet regular that no one saw coming.

According to the fashion guru, Meryl Streep had ordered a gray Chanel gown for the event, but had asked the team to add a higher neckline to it. Once alterations had begun, Lagerfeld said he received a call from Streep’s team, who told him to stop production, as they had “found someone who will pay us.”

Chanel notoriously refuses to pay celebrities to wear its designs on the red carpet as a matter of policy, although they are free to keep the dresses that they wear. While Lagerfeld says he’s still willing to give Streep the gown (“She could keep the dress because of the size. It’s couture. It’s perfect for her”), he threw a dagger her way by telling Women’s Wear Daily, “A genius actress, but cheapness also, no?”

Once news of the story broke, with Streep’s team immediately denying the claims, Lagerfeld backtracked a bit (perhaps he saw her Golden Globes speech?), reaching out to the magazine to clarify his statements. “Chanel engaged in conversations with Ms. Streep’s stylist, on her request, to design a dress for her to wear to the Academy Awards,” he said. “After an informal conversation, I misunderstood that Ms. Streep may have chosen another designer due to remuneration, which Ms. Streep’s team has confirmed is not the case. I regret this controversy and wish Ms. Streep well with her 20th Academy Award nomination.”

Streep, however, is having none of it, issuing her own (epic) statement to E! News. “In reference to Mr. Lagerfeld’s ‘statement,’ there is no ‘controversy’: Karl Lagerfeld, a prominent designer, defamed me, my stylist, and the illustrious designer whose dress I chose to wear, in an important industry publication. That publication printed this defamation, unchecked. Subsequently, the story was picked up globally, and continues, globally, to overwhelm my appearance at the Oscars, on the occasion of my record-breaking 20th nomination, and to eclipse this honor in the eyes of the media, my colleagues, and the audience. I do not take this lightly, and Mr. Lagerfeld’s ‘generic’ statement of regret for this ‘controversy’ was not an apology. He lied, they printed the lie, and I am still waiting.”

Dang. Is is just us, or is anyone else having flashbacks to The Devil Wears Prada? (We won’t lie: We were TOTALLY rooting for a “That’s all” in closing!)

Here’s to hoping these two don’t bump into each other on the red carpet tonight, should Lagerfeld also attend — we certainly wouldn’t want to be on the receiving end of that speech, should she get her big win!

Are you Team Karl or Team Meryl? Sound off over @BritandCo.

Nicole Briese
Nicole is the weekend editor for Brit + Co who loves bringing you all the latest buzz. When she's not busy typing away into the wee hours, you can usually find her canoodling with her fur babies, rooting around in a bookstore, or rocking out at a concert of some sort (Guns N' Roses forever!). Check out all her latest musings and past work at nicolebjean.com.
Celebrity Style
Style News
Celebrity Style Controversy