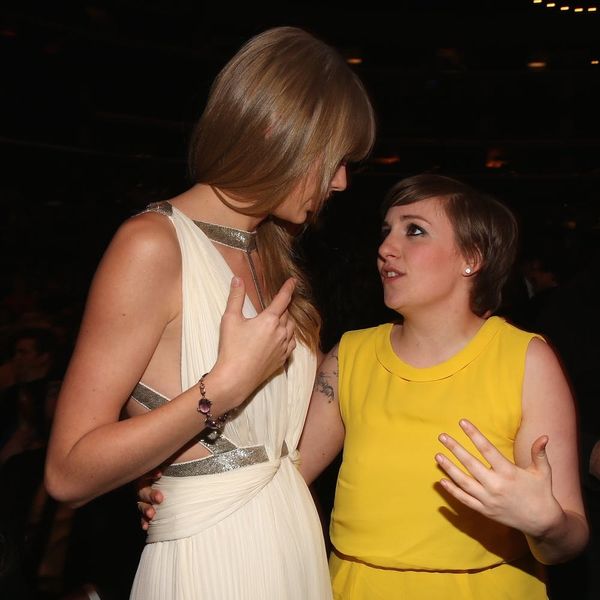 Lena Dunham praises her pal Taylor Swift and fall comes early to Starbucks in this morning’s top news stories. Check out those and more below in the TGIF Morning Buzz!

Proud of @taylorswift13 for her fierce & cutting testimony & her refusal to settle for being treated like property. Her example is powerful.

1. Lena Dunham praised Taylor Swift for her “powerful” testimony in court. Yesterday, Swift took the stand in court to testify against radio DJ David Mueller, who she alleges groped her at a meet and greet. (Mueller sued her first, claiming that the groping allegations, which he denies, led to him losing his job; Swift then countersued.) Swift’s testimony at the trial was sharp and impactful, and Lena Dunham took to Twitter afterward to say so. “Proud of @taylorswift13 for her fierce & cutting testimony & her refusal to settle for being treated like property,” Dunham wrote. “Her example is powerful.” At one point on the stand, Swift told Mueller’s attorney she was “not going to allow you and your client to make me feel like it is any way my fault, because it isn’t,” and do you hear that? That’s us applauding from afar. (h/t ET)

2. One of the best parts of early fall is when Starbucks starts serving Pumpkin Spice Lattes. This year’s release date hasn’t been announced yet (it’s usually early September), but the company shared some other news that changes everything: Iced Pumpkin Spice Lattes and Starbucks Pumpkin Spice Flavored Ground Coffee will be coming to grocery stores later this month. Starbucks also says that *more* limited-edition Iced Latte flavors will roll out through the year, but we just want Pumpkin Spice everything. (h/t Cosmo, photo via Starbucks)

Hey @ChloeGMoretz – let's set up a date. The crush is mutual. 😍 https://t.co/7iYrXFjAVl

3. Aaron Carter asked out Chloe Grace Moretz via Twitter after finding out he was her childhood crush. In a recent interview with Variety, Moretz admitted that she and her friends used to fight about who would date their crush, Aaron Carter, when they were kids. Carter caught wind of it and tweeted at her that the crush was mutual, then in a follow-up asked if he could take her to dinner. Carter recently broke up with Madison Parker and opened up for the first time about his sexuality. (h/t People)

4. Scott Porter and wife Kelsey Mayfield welcome a baby girl! The Friday Night Lights actor announced the arrival of the couple’s second child early this morning on Instagram, after first sharing a pic of himself in hospital scrubs, teasing the impending arrival. Soon, he was sharing a pic of himself snuggling their newborn baby, writing, “Sweet Dreams, world.” No word on a name just yet, but hopefully we’ll get some news after they all get some sleep. Congrats to the growing family! (h/t E!)

5. Kristen Bell’s honesty about the ups and downs of marriage with Dax Shepard is so refreshing to hear. We love how open Kristen Bell and Dax Shepard are about their life together, and in a new interview, Bell admits that their marriage takes a lot of work. “It is not easy to work around another human being, but if you commit to it, you can pretty much permanently respect that person,” Bell told Us Weekly. She also said they disagree on “90 percent of the issues on the planet,” but that they work on understanding each others’ perspectives. (Bell also noted that it doesn’t hurt that Shepard is always looking for attention and trying to make her laugh.) People often only want to project the perfect (and perfectly happy) versions of their lives to the world, so to Bell we say kudos for keeping it real. (h/t Us Weekly; photo via Kevin Winter/Getty )

6.Quote of the day: “Life is 10 percent what happens to me and 90 percent of how I react to it.” — Charles Swindoll

Do you have any exciting weekend projects planned? Let us know @BritandCo!