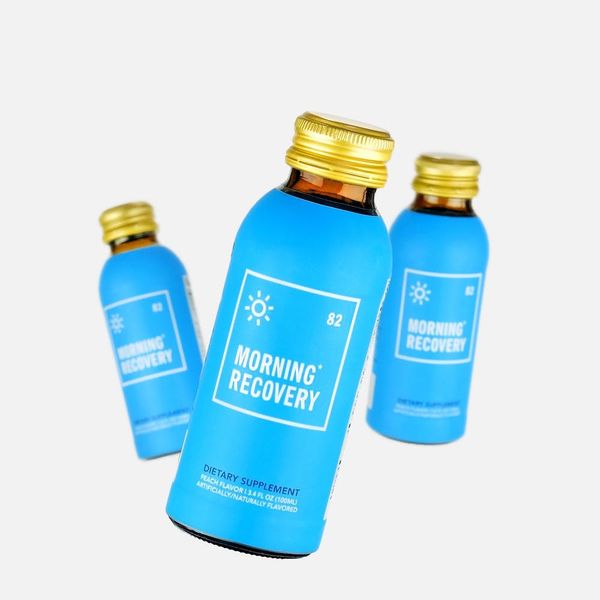 You got the job! You’re getting married! It’s brunch o’clock! Getting your drink on can work in just about any situation, but what doesn’t work is the icky feeling the next day. There are a ton of supposed cures out there for the dreaded hangover, from hair of the dog to apple juice, but a new one just dropped on the market and it might convince you not to give up drinking forever after a boozy night.

Morning Recovery Drink, created by Sisun Lee and Jing Liang, MD, PhD, and their team at 82 Labs, is a dietary supplement that tackles the root causes of hangovers — and all you have to do is drink it sometime before you go to sleep (or even before you have your first drink). Lee first became familiar with hangover drinks when he was in Korea last October. “It’s a huge market over there,” he says. “When I came back to the States, I started researching and digging up patents and white papers to understand the core science behind hangovers [where] I stumbled across white papers conducted by Dr. Liang at UCLA.”

Products like Gatorade and Pedialyte just replenish electrolytes lost due to drinking, but Morning Recovery Drink does that and more. Its formulation uses ingredients like prickly pear and milk thistle to fight off free radicals and prevent liver damage. It also contains vitamin B, which you lose via alcohol consumption, and DHM, an enzyme that breaks down acetaldehyde, a toxin created by your body’s breakdown of alcohol. According to Lee, “The more you build up acetaldehyde in your body, the more you feel the symptoms of grogginess, nausea, and stomach pain.” DHM also temporarily prevents glutamate rebound — alcohol suppresses this chemical in your brain and so your brain overproduces it the next day — which is what leads to a pounding headache, as well as fatigue and anxiety.

Lee actually got the idea for using DHM from China’s first pharmacopeia (an encyclopedia of medicinal substances), the Tang Materia Medica, because Hovenia Dulcis, a natural herb high in DHM, is used in most of Korea’s hangover drinks. Lee discovered that the herb was used as a drinking remedy as far back as the year 659. “East Asians have been using Hovenia Dulcis as a way to cure hangovers for a long time now, although the understanding of the science behind DHM has been relatively recent,” he explains.

Morning Recovery is currently only available in peach flavor, but Lee and his team are dabbling in more options, including a zero-calorie and even a pill. Right now you can pre-order it on the Morning Recovery Drink website: $27 for a six-pack, $48 for a 12-pack, or $90 for a 24-pack. There are larger pack options too, if you want to go in on one with your pals.

What do you think of Morning Recovery Drink? How do you deal with hangovers? Tell us @BritandCo!

Shea Lignitz
Shea can be found in the nearest bookstore or brewery, exploring the great outdoors, or blasting Led Zeppelin. She grew up in the cold and rain of Northern California's redwoods but is currently wandering around Texas.
Food News
The Conversation
Reviews:
More From Food News