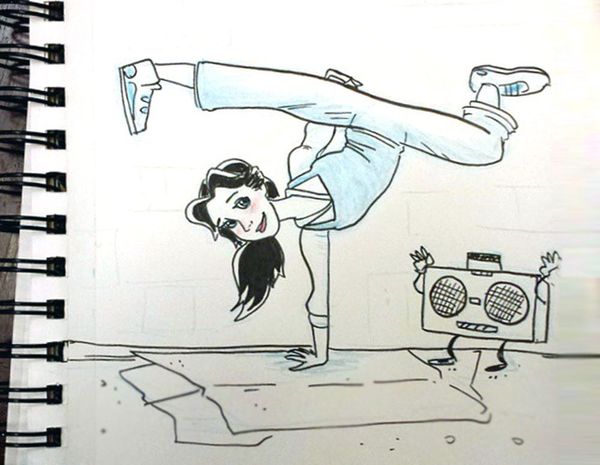 Breakfast at Tiffany’s wouldn’t be quite the same if it was Breakfast at Iffany’s instead, don’t you agree? When our favorite movie titles lose even just one letter, the results are kind of weird, kind of silly and altogether pretty interesting. That’s what inspired artistAustin Light, and this funny little series. Add “Pretty in Ink” to your Netflix queue now:

And “Beauty and the Beat.” The idea came from a reddit thread, where users were asked to pick a movie, remove one letter and then give a brief description.

Light took the brainstorm one step further by drawing scenes illustrating the new movie titles, and giving them each a synopsis of the transformed plot.

“Brave” becomes “Rave” a story of a Scottish girl on the dance floor. “Finding Nemo” turns into “Finding Emo,” which probably takes a darker turn than our Pixar favorite. From “Harry Otter,” to “Pup Fiction,” “Fight Cub” and “Jurassic Par” the silliness goes on and on.

Check out the entire series on Light’s Imgur account. We promise you’ll have plenty of laughs.

Think any of these should be made into movies of their own? Share your favorite, must-follow photo series below!

Nora Landis-Shack
Nora is a writer, photographer, foodie and feminist. After living in New York City for 23 years, she recently moved San Francisco and can't wait to explore. When she's not pursuing her interests in health and technology, she loves hiking, yoga, playing piano and squealing over kittens as an ASPCA volunteer.
Art
Fashion
Art Artist Design
More From Fashion