14 Ideas for Planning a Multicultural Wedding 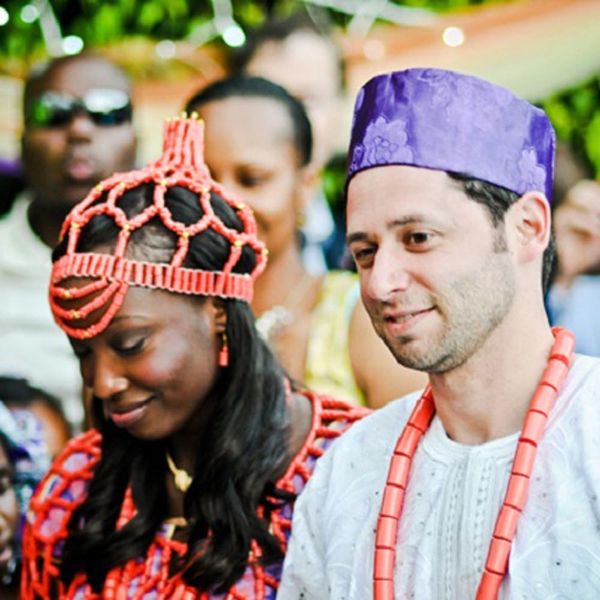 Planning a wedding, whether it’s a small, intimate affair or a 250-guest extravaganza, can have its challenges. From choosing a wedding dress to deciding on a band or a DJ, there are A LOT of decisions to make. Add in trying to incorporate multiple cultures and religions, and things can get even trickier. To help you out, we’re sharing some of the most gorgeous multicultural weddings out there, along with tips on how to include everything important to you on your big day. From traditional rituals to elaborate entertainment, here are 14 weddings that marry different cultures seamlessly.

1. Bit of Everything: Sometimes all it takes is adding a little bit of each culture in significant ways. This simple Indian-Japanese-American wedding is a perfect example of this. The couple incorporated Japanese gold paper cranes, Indian wedding outfits and wore a traditional white dress and suit for their reception to celebrate the groom’s American background. (via Our Labor of Love)

2. Times Two: For this Puerto Rican-Dutch couple, one wedding ceremony wouldn’t be enough to accommodate their large families and friends scattered across the globe. So instead of one wedding, they celebrated their love twice — once in Rochester, New York with the bride’s family, and a second time in Barcelona, Spain, with the groom’s family. (via Craig Griffin)

3. Switching Sides: This creative couple took wedding wardrobe changes one step further by wearing traditional clothing from each other’s cultures. The Japanese bride stuns in an Indian sari while the groom rocks a traditional Japanese kimono during their first dance. This is a beautiful example of how a couple can embrace each other’s cultures through clothes. (via Josh Ohms)

4. Faith Fusion: Sometimes mixing cultures means mixing religious traditions. If your multicultural wedding is interfaith, try combining them like this colorful Nigerian-Jewish wedding. Their ceremony was performed by a pastor and a rabbi, who both stood under a huppa. Groomsmen wore traditional Jewish yarmulkes in a vibrant green hue inspired by the Nigerian flag. (via Michelle Logan)

5. Reception Entertainment: You can also showcase your culture with a post-dinner performance to get the party started. Not only did this couple honor the bride’s Asian heritage with traditional Chinese lion dancers, but they also gave their guests a wedding experience they’ll never forget. (via Ein Photography)

6. Bright Blooms: Some people consider flowers to be the most important decorative element of a wedding, so why not inject your culture into the floral arrangements? This Pakistani-Indian wedding used marigold and poppy, traditional colors that are significant to both their cultures, to create vibrant centerpieces and bouquets. (via Dennis Kwan)

7. Decor Details: This Spanish-Moroccan wedding shows that cultural elements can be used everywhere, especially in the decor design. The couple used pillows and rugs in traditional patterns for guests to sit and socialize on during their cocktail hour. (via Leila Brewster)

8. Love Language: With more than one culture, inevitably there comes more than one language. When planning their Chinese-German-Jewish ceremony, this couple created a multilingual kebutah (the Jewish marriage contract that outlines the obligations of the groom to his bride) so both sets of parents would be able to understand and sign it. (via Erin McGinn)

9. Wedding Party Variations: When this Brazilian-American couple thought about the breakdown of their wedding party, they decided against choosing bridesmaids and groomsman separately and used the Latin tradition of “Padrinhos.” Together, they chose six married couples that they knew well and whose marriages they admired to stand beside them at the altar. (via Sera Petras)

10. Stand by Me: In this Jewish-Greek wedding, you’ll see another way to choose your wedding party. Since it’s customary in both Greek and Jewish cultures, this couple decided to have their families stand with them at the altar. It’s a beautiful representation of two families and two cultures blending. (via Brookelyn Photography)

11. Total Immersion: Taking your celebration abroad is an incredible way to celebrate a multicultural wedding. This couple had their wedding in Thailand, where a traditional Buddhist blessing ceremony took place. You and your guests can fully immerse yourselves in the cultural rituals that are important to both of you. (via Alison Mayfield)

12. Generous Gifts: One of the best parts of attending a multicultural wedding is experiencing the beautiful blending of cultures. To honor this bride’s Nez Perce culture, the couple gave their guests gift bags filled with food and useful home items. (via Lucas Mobley)

13. Printed Programs: The programs for your wedding can be a great place to tell the story of your love. Putting thought into the design can make them a unique keepsake for your guests long after the party is over. The programs at this Indian-American wedding were created as mini books and designed with a colorful pattern inspired by Indian saris. (via Andi Hatch)

14. Traditional Treats: Food is an easy way to bring two cultures together and give your guests a taste of dishes they haven’t tried before. As a nod to the bride’s Latina heritage, this couple had their guests sip on sangria during cocktail hour and enjoy paella for dinner. They even skipped the traditional wedding cake in favor of churros for desert. (via Our Labor of Love )

How will you incorporate traditions in your wedding? Have you been to any multicultural weddings lately? Tell us in the comments below!

Farah Prince
Farah is a New York writer who would happily spend her time wandering around the Met and loves style, design and anything wedding related. When she's not getting lost in Central Park - literally every time - she's on a lifelong quest to find the perfect burrito.
Party
More From Party