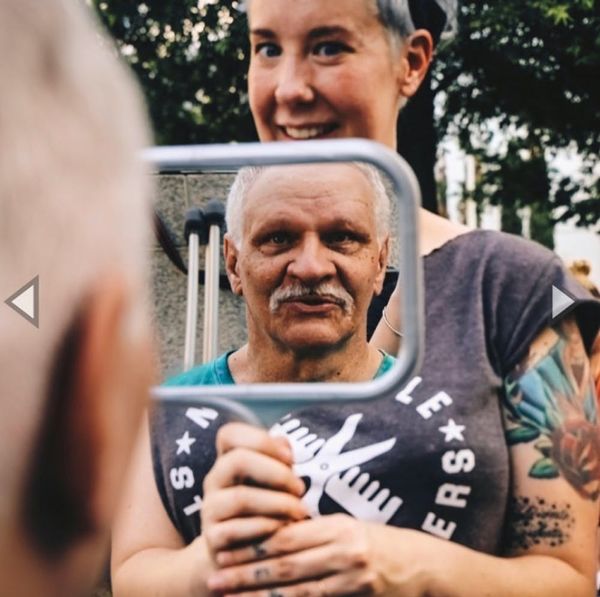 Be the Change looks at real life projects and inspiration to make the world better.

As a stylist, Caroline Lindner knows all about that feeling you get after a much-needed haircut. She sees it in her clients every day. It’s confidence. It’s loving yourself, and feeling worthy of love. But she knows that a simple haircut is a luxury some people don’t get to experience.

After she went through the vulnerable process of getting sober in 2017, service work became a priority in Lindner’s life. Inspired to use what she had to help others, she caught wind of two local volunteer organizations that serve the local homeless population — a mobile shower truck called ShowerUp and a food, clothing, and supplies provider called People Loving Nashville — at the same plaza in Nashville every Monday night. On one such Monday, she decided to show up by herself to give free haircuts to the homeless.

Knowing that the two other outreach groups would also be there was a definite source of reassurance for Lindner, who was entering personally uncharted territory. When we ask what worried her about the endeavor, she bluntly responds: “Everything. Absolutely everything.” Mostly, she didn’t know how she would be received by the community.

“I was scared that people wouldn’t want me to cut their hair. I know that I’m picky about my hair and I don’t expect it to be any different for them. I was trying to get them to trust me that I knew what I was doing and convince myself of that too,” explains Lindner.

Lindner’s experiment proved a success, and before long she was asking fellow stylists to join her on her Monday night haircut missions. They were “apprehensive,” as Lindner recalls to us, “and probably a little bit scared. Because most of us have never cut outside before in an environment that we weren’t used to. But the rest of the community was excited because they had never heard anything like it.”

Fast forward a year later and Nashville Street Barbers, as it’s now known, gives up to 80 cuts in one night, with as many as 15 barbers volunteering at once.

Through Nashville Street Barbers, Lindner sees “people at their lowest” — veterans with PTSD or people just coming out of jail. Often, she sees the same people week to week. While they look forward to seeing each other, it’s rewarding when people stop coming because they’ve either gotten a job or housing. She likes to think the haircut helped get them there.

Lindner was proud to share that Jay, one of the men who was receiving cuts from her team on a weekly basis, is now showing up as a volunteer stylist. He was always very particular about his hair and actually taught the stylists a thing or two about cutting, she tells us. Once Lindner’s team was able to provide him with tools, they asked Jay if he would join the group.

“He’s so dedicated and he gives us some really good insight into a world that we don’t 100 percent know,” adds Lindner.

Jay’s story is only one of a growing number of interactions that have turned into special moments.

“Every single time when you see someone’s face light up after they see their haircut, that’s the best,” Lindner says. “I had a man cry in my arms. He said more than a haircut that’s what he needed. I tear up just thinking about it because these people don’t have human touch from day to day.”

As a recent honoree of Hardee’s All Star program and one of five hometown heroes receiving a $10,000 donation, Lindner is looking forward to making Nashville Street Barbers an official nonprofit organization. She’s also thinking about investing in a mobile truck so her team would be able to cut in bad weather conditions.

But regardless of recognition and resources, Lindner says her goals have always been the same.

“We want to go to different communities and inspire people to start programs just like this where they live. There are always people in need. Be a service to people.”

Does Nashville Street Barbers inspire you to give back? Tell us @BritandCo!

Natalie Zisa
Natalie Zisa is a freelance writer based in New York City. When she's not writing about inspiring women, she's pursuing dance professionally. Otherwise, you can find her searching for free fitness classes, lip syncing to her favorite Italian music, and enjoying her mom's homemade pizza. If she could interview one person, it would be Chelsea Handler.
Activism
Empowerment
Activism Be the Change
More From Empowerment