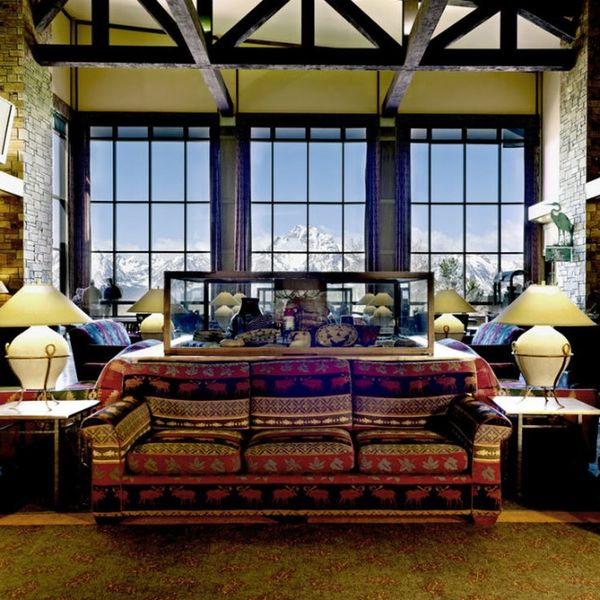 When most people road trip to an epic US national park, they sleep under the stars, slumbering in tents and waking up to every sound, thinking it’s a bear. Then there’s the rest of us, who don’t camp and won’t even go glamping. To enjoy the great outdoors, we need a soft bed, hot running water and a place where we can order our food off a menu instead of trying to figure out how to cook delicious food over a fire pit. Thankfully, there’s all that and much more at these 10 beautiful and luxe lodges, located smack dab in the middle of our country’s greatest national parks.

1. The Majestic Yosemite Hotel, Yosemite National Park, CA: In 2016, the almost century-old Ahwahnee Hotel was forced to change its name, but that’s the only thing that’s different about this super glam lodge. This gorgeous hotel is still the place for luxury in the middle of one of America’s most beloved national parks. President Obama, John F. Kennedy, Ronald Reagan, Walt Disney, Judy Garland and Charlie Chaplin are just a few of the famous folks who’ve enjoyed the four-star linens. Make sure to dine in the beautiful chandelier-lit and stained-glass-adorned Majestic Yosemite Hotel Dining Room at least once (but take note, there’s a dress code at dinner for everyone over four-years-old. Yup, seriously). (Photo via Majestic Yosemite Hotel)

2. Old Faithful Inn, Yellowstone National Park, WY: The Old Faithful Inn, a national historic landmark completed in 1904, was built using local stones and logs. For all you Lincoln Log lovers out there: It’s actually known as the largest log cabin in the whole world. This huge hotel, which has 327 rooms, features a massive lobby that served as major inspo for Disneyland’s Grand Californian and Walt Disney World’s Wilderness Lodge. The Old Faithful Inn is open from early May until mid-October, so start planning your 2017 trip now. (Photo via Yellowstone National Park)

3. Jackson Lake Lodge, Grand Teton National Park, WY: While this hotel is pretty swank, the view from the lobby is the star of the show. In the middle of the lodge, an entire wall of 60-foot windows give you a panoramic view of Jackson Lake and the Teton Range. The luxury eco-hotel, which has 385 rooms, is centrally located for easy exploring around the park. If you don’t feel like leaving the breathtaking lodge (or, more likely, your S.O. wants to sleep in), check out the extensive hotel exhibit of Native American artifacts and Western art. To avoid hosting a hotel full of snowed-in guests, the Jackson Lake Lodge is only open from mid-May 16 to mid-October. (Photo via Jackson Lake Lodge)

5. Zion Lodge, Zion National Park, Springdale, UT: Tucked right next to the famous rock formations, Zion Lodge is the only in-park accommodations in all of Zion National Park’s 146,000 acres. Rest your head in one of their historic cabins, a hotel room or a swank suite, then enjoy a glass of wine near your cozy in-room fireplace or on your private porch. Unlike many other national park lodges, the Zion Lodge is open all year long and their hotel restaurant, Red Rock Grill, even serves up special feasts for Thanksgiving and Christmas. (Photo via Zion Lodge)

6. El Tovar, Grand Canyon National Park, AZ: The historic El Tovar Hotel is located right on the rim of the Grand Canyon. The lodge, which was designed to look like a mix between a Swiss chalet and a Norwegian villa (yeah, try to picture that for a second), has seen its own fair share of all-star guests since they opened way back in 1905. Theodore Roosevelt, Albert Einstein, President Bill Clinton and Sir Paul McCartney are a few of the impressive figures who’ve bunked down in the rustic luxury of the El Tovar. But be warned, you’ve gotta plan ahead to stay here. Since it only has 78 rooms, it books up way in advance. (Photo via El Tovar)

7. Jenny Lake Lodge, Grand Teton, WY: You’ll find the four-diamond Jenny Lake Lodge nestled at the foot of the Grand Tetons, next to a meadow of wildflowers. This is a great option for lovers or families who want a bit more privacy than the Jackson Lake Lodge offers, since Jenny Lake’s historic log cabins are spaced out among the pine groves. Sign up for horseback riding or take a spin on a cruiser bike, but definitely do NOT miss having dinner here. Their five-course dinner menu (which changes nightly) features entrees like herb-roasted rack of lamb, Indian-spiced steelhead trout and charred butternut squash tarts (epic view of the national park included). The lodge is open from early-June to mid-October. (Photo via Jenny Lake Lodge)

8. Paradise Inn, Mount Rainer National Park, WA: This historic lodge (which turned 100 this year!) is located 5,420 feet above sea level, on the south slope of the mighty Mount Rainer. A common jumping off point for serious climbers, the eccentric hotel is also minutes from several trails for moderate hikers. When you’re chillin’ in their lobby (that 10-mile hike definitely didn’t kill you), make sure to look up; within the wooden rafters there are over 60 floral lampshades, in all sorts of sizes, suspended from the ceiling. The Paradise Inn is open from mid-May through early-October, but be aware that the snow (several feet of it) sometimes lingers into the summer. (Photo via Paradise Inn)

9. Lake Quinault Lodge, Olympic National Park and Forest, WA: Lake Quinault Lodge, built in 1926, serves up that cozy home-away-from-home feel that calls guests back year after year. Splurge for The Beverly Suite, which takes up the entire top floor of their boat house (think: 360-degree views). Even if you can’t throw down that much cash, most rooms have wonderful lake views, and you’ll feel refreshed after a few days of being immersed in the serenity of the forest. The Lake Quinault Lodge is open year round. (Photos via Lake Quinault Lodge)

10. Timberline Lodge, Mount Hood National Forest, OR: Okay, so we’re sort of stretching this one, since it’s located in a national forest — not a national park — but we couldn’t leave it off the list. Built by the Works Progress Administration during the Depression, Timberline Lodge is a testament to stunning American craftsmanship. It also has a place in cult movie fandom, since it was used as the exterior for the Overlook Hotel in Stanley Kubrick’s classic The Shining. (Photo via Timberline Lodge)

Which National Park lodge would you like to check out the most? Share with us over @BritandCo!