This Purse Will Charge Your Phone for Up to 96 Hours 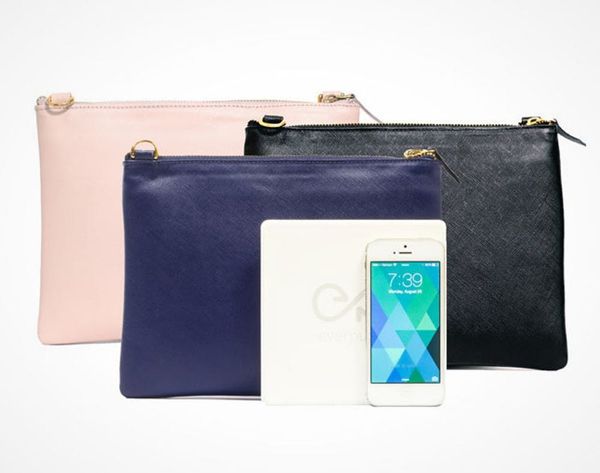 The Everpurse has been at the top of our holiday wish lists for a full year now, charging our smartphones on-the-go in its game-changing power pocket, sadly, only in our dreams. (In the same dreams, our unbendable iPhone 6s are also connected to our Intel x Opening Ceremony wearables, btw.) And even though we’ve thrown Santa some pretty serious shade for skipping over the super stylish gadget last Xmas season, we’re not letting the Everpurse elude us this time around, and for good reason. The team at Everpurse is releasing a second-generation line of charge-anywhere clutches that are bigger, lighter and twice as powerful than the original.

The roomier and sleeker 2015 Everpurse is a more versatile smart bag than its predecessor, both inside and out. The slightly larger design elevates the bag from a glorified wristlet to a full-fledged clutch where all-day essentials including sunglasses, beauty basics and your Moleskine can snuggle up next to your smartphone. But bigger doesn’t mean it’s also heavier: the internal tech is 70% thinner than what it used to be, making the bag even less bulky and lighter to carry. While its standard bag still provides a powerful 48 hour charge when your phone is zipped in, it’s brand-new model, the Everpurse Fab, can double the battery life, pumping your phone with enough juice to last up to 96 hours at a time — that’s four glorious wireless/outlet-free/panic-free days.

The designs too, are just as appealing. The Saffiano leather bags are chicer than ever before with delicate gold hinges replacing clunky silver hardware and reimagined in a simple color palette of wear-everywhere black, deep blue and nude (though we’d call it a dusty rose). The charging pad where the Everpurse reboots is also more streamlined. It’s not only smaller, lighter and equipped with a USB cord that will connect to any tech-friendly charger, but it also features a built-in light that turns green when your bag is ready to go.

Once again, Everpurse is seeking funding on Kickstarter, where the standard 2.0 model is available at an “earliest bird” price of $149 ($100 less than retail) and its Fab version is priced at $189 — just $40 more for double the charge ($110 less than retail). Those eye-catching prices plus the by-the-holiday promise means we’re already sending our best wishes to the North Pole and whatever else it takes to make the nice list.

What are your thoughts on the latest and greatest Everpurse? Are you adding this to your holiday wish lists too? Tell us what smart gadgets you HAVE to have this holiday in the comments below.