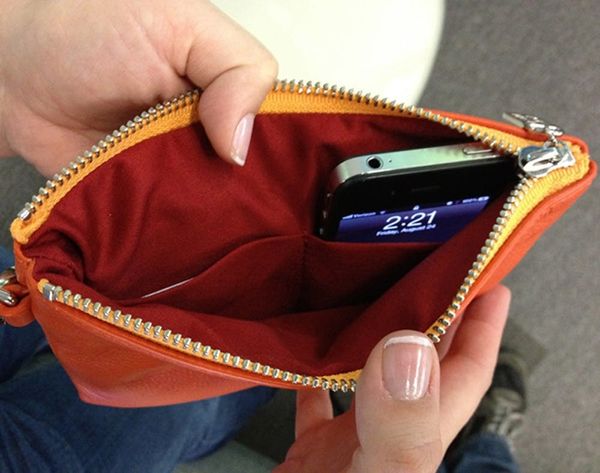 There’s no greater digital nuisance than a dead battery. Especially when you’re miles away from the nearest compatible charger or the power’s out.

1. Everpurse ($189+): You’ll never have to rustle around for your phone in the depths of your purse again thanks to Everpurse. These trendy clutches have a special charging pocket that powers newer iPhone and Galaxy models all day while you cling to the wrietlet in style (seriously, that black studded number from its new 2013 collection is to die for!). When you’ve arrived home for the night, simply reboot your Everpurse on its wireless charging mat.

2. JB Powered Laptop Bag ($258): This shiny tote includes a built-in battery pack that recharges small devices like smart phones, mp3 players and e-readers partially for up to 10 days or for two complete charge cycles. The battery can be charged at any electrical outlet or through a computer’s USB port. But enough about the battery, let’s talk about the bag! This buckled, five compartment tote is made out of recycled plastic bottles and comes with a removable gear bag embellished with an adorable “@” sign. Is it not the perfect techie carryall?

3. Hustle ($199+): High fashion meets high tech with Hustle, a small bag with big power. Hustle can charge your phone from zero-to-full up to four times and alerts you to set it on its wireless charging mat when it’s running low. Hustle makes three classy designs: a bag, a clutch, and a wallet, which means dudes can charge up in style, too.

4. Phorce (not yet available): This device charging bag is the ultimate travel companion. Funded via Kickstarter about a year ago, this shape-shifting bag not only morphs between briefcase, backpack, and messenger bag, but it has the power to charge up to three USB devices at once. Phorce’s lightweight battery pack has to capacity of 90Whr, which has enough juice to charge a single iPhone 5 over 14 times, and even most laptops. Sounds pretty fierce, right? It gets better. Phorce comes with a smartphone app that shows you exactly how much power is left in your bag and how to maximize your usage. It can even alert you if you accidentally leave the house without it!

5. Powerbag (prices vary): In the age of smartphones, we don’t think twice about the task of turning on our devices to make them work. But what about turning on a bag? That concept just got real with Powerbag, a collection of backpacks, messenger bags, and briefcases that charge via electrical outlet, then powers on to power all of your stuff. The bag’s four-port charging system is compatible with hundreds of devices, making this the most versatile bag of the bunch. You can check little lights on the front of the bag to monitor its battery level, which when fully charged can boost the average smartphone two times over.

6. Energi+ Backpack ($200): This sleekly designed backpack boasts a charging system that allows you to route your cables to five external or two internal charge-specific pockets. You can charge up to three devices simultaneously, which means that many of the ten total compartments will remain free for other traveling or back-to-school essentials. Its portable Lithium Ion battery recharges via any USB port.

7. Power Commute Laptop Messenger Bag ($200): Bike messengers, rejoice! Timbuck2 has partnered with Joe Energy to build this durable, over-the-shoulder sling complete with a charging pack, which powers most smartphones up to two times over. The rechargeable battery pack sits in its own dedicated, weatherproof compartment on the side of the bag, which makes the cords super easy to access whether you’re walking or riding.

8. BirkSun ($150+): If you want to power your devices the BirkSun way, all you have to do is go outside and have fun! No joke. The solar paneled backpack gets its power from the sun, which in turn charges a battery that can power your devices. Each bag comes with a pack of convertible device connectors and a USB cord to charge the bag on cloudy days.

9. Voltaic ($129+): While these all-black solar panel bags look way hardcore, Voltiac bags are designed to be user-friendly: that means they’re lightweight, waterproof, and of course, durable. On the backpack shown here, it takes six whole hours of fun in the sun to fully charge a smartphone, but don’t fret: just about one hour of rays earns roughly 75 minutes of talk time, which is way more doable for the average Jane. A USB charger makes it equally as useful when it’s off the grid.

Would you buy a bag that charged your devices wherever you roamed? Are there any awesome bags we missed? Talk to us in the comments below!