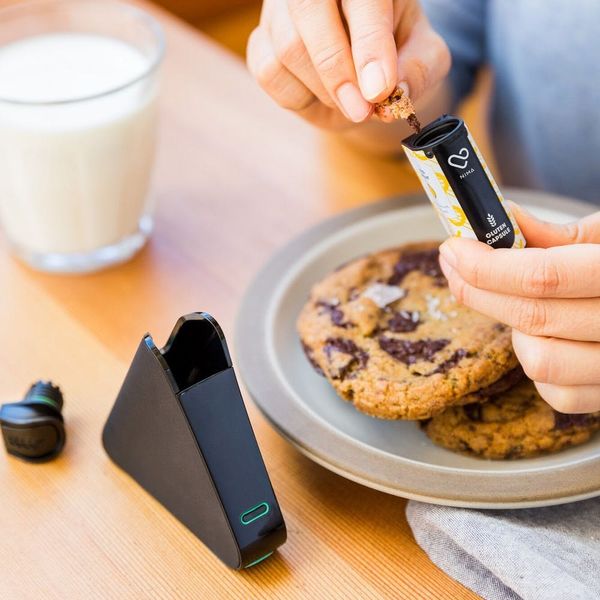 Welcome to our food series called Eat It Up, where we share the kitchen gadgets and foods that we can’t cook without.

“Did the waiter hear me when I asked for gluten-free pizza crust?” “Is this gluten-free pasta really gluten-free?” “Has this soup been thickened with flour?” If your experience as a gluten-free diner has been riddled with nerve-racking questions like these, one new food gadget could finally ease your mind for good. The Nima Gluten Sensor ($199), developed by MIT graduates with food allergies, detects the presence of gluten in under five minutes.

To use the pocket-sized Nima, you need the brand’s disposable Test Capsules ($62/12 or $239 for the Starter Kit, which includes the Gluten Sensor and 12 Test Capsules). Place a pea-sized piece of food (solid or liquid) into a capsule, and screw the lid on tight to grind the food into smaller pieces. Insert the capsule into the sensor, press the button, and wait. Inside, a pair of gluten-sensing antibodies, developed by Nima’s chemistry team, either attaches to the gluten protein in the food and alerts you or detects no gluten protein at all.

We first tested Nima with a piece of whole-wheat bread. The sensor made a quiet grinding noise while the onscreen progress bar filled up, and less than five minutes later, the screen flashed with a bright blue “gluten found” message. (That five-minute part is significant, since other, more complicated home tests can take around 25 minutes.) Next, we threw in part of a gluten-free chip and got a blue smiley face confirming that it was indeed gluten-free. With that, we threw the disposable capsules in the trash and chowed down on our gluten-free snack.

Whether or not you have a Gluten Sensor, you can download the Nima app to see other users’ test results and explore gluten-free restaurant items near you. If you have a peanut allergy, check out Nima’s Peanut Sensor ($199).

Sara Cagle
Sara is a food and lifestyle freelance writer in Los Angeles. She writes a weekly events column for the Los Angeles Times and loves writing food content for Brit + Co. After all, the English language's most fun adjectives are best applied to delicious foods. In her free time, she's a hip hop dancer, avid moviegoer, and thorough face-mask user.
Eat It Up
Kitchen Tools and Gadgets
Eat It Up Gadgets Kitchen Gadgets
The Conversation