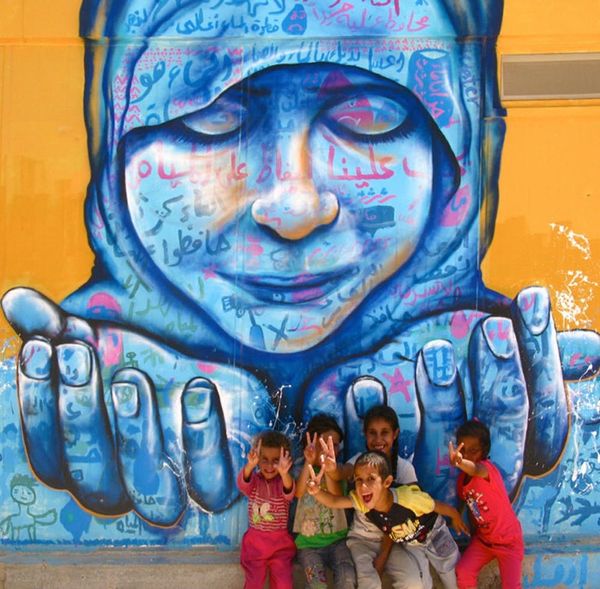 Art has an amazing capacity to transform. How many of us have had our perception — or even our lives — changed by a great novel, a movie or even a single performance? Creative work can be a tool for social good, chipping away at stigmas and bringing our attention to issues that desperately need it. Maybe one of the most magical qualities of art is its ability to transform and heal its maker. As the painter Georges Braque said, “Art is a wound turned into light.” Here are five projects from around the world that give marginalized, displaced and traumatized communities the space to heal through self-expression.

1. The Za’atari Project: As national leaders debate how to help the more than four million Syrians who have fled their country, the lives of refugees remain suspended. Children are missing out on their education and the experiments in curiosity that nourish little minds. In Jordan’s Za’atari Refugee Camp, one of the largest in the world, artist Joel Artista has collaborated with aid organizations, local artists and refugees to bring art and education to the camp’s children. Through the project, Syrian children learn artistic techniques, voice their dreams and their pain and make stunning murals that breathe new life into the monotonous desert that surrounds them. (Photo via Joel Artista)

2. Afghan Women’s Writing Project: AWWP gives Afghan women a place to exercise their own voice, one we almost never hear in the news reports. When these women are paired with writing mentors around the world, the results are poems bursting with metaphor and light, essays that bring never-before-spoken truths and entire volumes of testimony of what it means to be a woman in Afghanistan. (Photo via AWWP )

3. Musicians Without Borders: “War Divides. Music Connects,” is the slogan of this organization, which operates in several post-conflict areas like Kosovo and Rwanda. In Palestine, the group uses samba beats to energize communities and rap as a tool for social change. They are empowering the marginalized deaf youth of the West Bank through music. The organization also conducts workshops for Palestinians who use dance, theater and song to help children in orphanages and hospitals express themselves in a safe environment. (Photo via Musicians Without Borders)

4. Taller de Vida: There are numerous organizations working with former child soldiers, but many do not address the particular needs of young girls who are also forced into conflicts, suffering horrific abuse at the hands of military groups who use rape as a weapon of war. The Colombian Taller de Vida organization’s Girls of Water and Rice program uses art therapy to help girls work through the trauma while also bringing the reality of their experiences front and center with powerful and unforgettable photographs. (Photo via Madre)

5. Bond Street Theater: This NGO has been bringing theater to communities in more than 40 countries for nearly 50 years. Working with children in rural areas of India, in earthquake-shattered Haiti and with incarcerated women in Afghanistan, the group focuses on both being the conduit for inspired, creative expression and using theater to introduce practical information about civic rights and health issues. In Myanmar, the group has collaborated with the local Art Travelers Theatre to address discrimination, a major issue in a country with nearly 100 ethnic groups. At the end of a show, audiences are invited to come up on stage and play out how they might solve a particular social problem. (Photo via Shear Water)

How would you use your artistic powers for good? Tweet us @britandco!

Masha Vapnitchnaia
Masha loves great stories and splits her time between living and telling them. She writes about all the things that make her swoon like creative women, self-discovery, travel and wine. She's also writing a book about the time she walked 3000 miles across nine countries with a backpack and a million questions about purpose, heart and common ground.
Art
Lifestyle
Art
More From Lifestyle