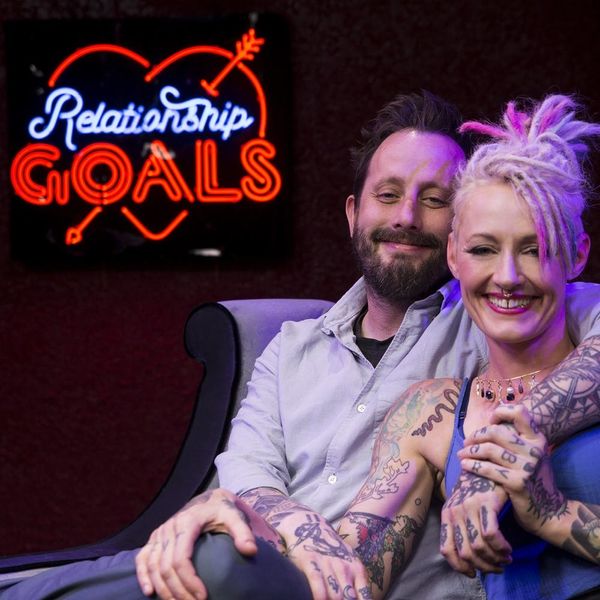 When Geoff and Griffon Ramsey met on a blind date more than a decade ago, it was Geoff’s final chance at love with his now-wife — at least, that’s what he believes. “I actually cancelled twice beforehand,” he says. “She gave me one last shot. And that was all she wrote after that.”

The Ramseys’ first date lasted 12 hours. There was no kissing — instead, just a lot of good conversations and explorations of Austin, TX, where they continue to make their home with their daughter, Millie. “The thing we shared was a sense of adventure,” Griffon says. “We met and we were ready to dream and talk and come up with stuff. That was probably the first attraction.”

Fast forward 13 years, and Geoff and Griffon’s taste for adventure continues to inform their life together, which they lovingly refer to as “controlled chaos.” Both are hardworking creatives juggling seemingly endless projects at any given time — among other things, Geoff is an independent filmmaker and the co-founder of production company Rooster Teeth, and Griffon is a well-known chainsaw carving artist (how cool is that?). The couple recently teamed up to create a podcast called Relationship Goals, a title inspired by the hashtag that so much of their online community has assigned to them over the last few years.

Thanks to the Ramseys’ substantial social media following (Geoff and Griffon have 173,000 and 116,000 Instagram followers, respectively), their colorful, free-spirited marriage has attracted its own fan base. “We’re very open and we share our lives,” Geoff says. “Griffon and I and our daughter genuinely like each other and like to be around each other. I have more fun with those two than anybody else, and I think you can tell.”

In a tongue-in-cheek reference to the idea of #relationshipgoals, the Ramseys launched their podcast in February 2017 as a platform to celebrate relationships of all kinds. “We want to share the lighter side of it,” Geoff says. “It’s easy to get bogged down in the minutiae of the day-to-day and to forget to look up and remember how lucky you are to be in this special place you’re in with this special person you’re in it with.”

Hosting a podcast about relationship goals, however, has forced the Ramseys to take a closer look at their own marriage. Prior to recording their first episode, Geoff and Griffon spent time reconnecting over deep conversations, taking time out of their always-busy travel schedules every week to make sure that their relationship was healthy and ready for the spotlight.

“The problem with the whole #relationshipgoals thing and having young people reach out to us about our relationship is that it makes you feel like you have to be setting some sort of example,” Griffon says. “You don’t want to be a complete disaster if other people are paying attention!”

“Disaster” hardly seems like a word you could use to describe the Ramseys, whose slightly unconventional family structure brings a new perspective to the often-predictable world of so-called “ideal” relationships. Due to their busy work schedules, Geoff and Griffon each spend several weeks of the year traveling, leaving their spouse home in Austin to bond with Millie and keep things running day-to-day. The Ramseys say that this unconditional partnership and their ongoing support of each other’s creative pursuits is one of their keys to success.

“The thing that attracted me to Geoff was his sense of adventure,” Griffon says. “He had just quit his day job. I was impressed with that side of him, so to expect him not to do that anymore because I’m now married to him would be pretty ridiculous.”

Geoff and Griffon’s modern take on love, marriage, and relationships will continue to play a role in their new podcast, but the Ramseys are also committed to keeping the conversation light. Each month, the show will feature another couple alongside the hosts, allowing for plenty of fun conversation and games.

In addition to continuing to pursue their personal projects and collectively establishing the new podcast, Geoff and Griffon have some relationship goals of their own. “I have the most fun with him,” Griffon says of her husband. “But we also try to give each other the freedom to be individuals and grow and change and to keep reconnecting as we go.”

(Photos via Geoff and Griffon Ramsey)

Alli Hoff Kosik
Alli Hoff Kosik is a freelance writer who is passionate about reading, running, rainbow sprinkles, her lipstick collection, watching embarrassing reality TV, and drinking pink wine. She lives in Brooklyn with her husband and (in her dreams, at least) three golden retriever puppies. Listen to her talk books on The SSR Podcast.
Relationship Advice
Relationships
Relationship Advice