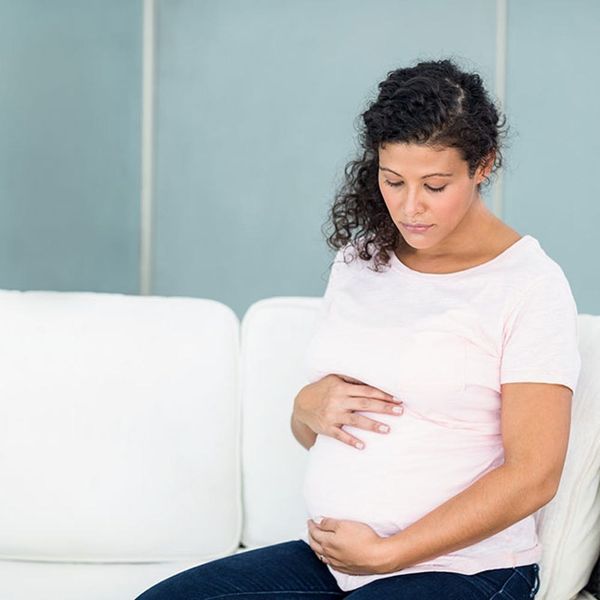 Bringing a child into the world is supposed to be one of the happiest times of a woman’s life. From pregnancy announcements to the joy-filled gender reveal to baby showers, moms-to-be are celebrated and have lots of celebrating to do. But for expecting mothers, it’s not all snapping smiling baby bump photos to post on Instagram and blissing out in prenatal yoga classes; research shows that millennial women may be struggling with depression while pregnant more than we think.

A recent study in The Journal of the American Medical Association found that pregnant women aged 19-24 were 51 percent more likely to struggle with depression during pregnancy than women of the same age 25 years ago. In the study, researchers followed two generations of young mothers in England, the first of which gave birth between 1990 and 1992, and the second between 2012 and 2016. Participants in the second generation were the pregnant female offspring, or female partners of the male offspring, of the initial generation studied. Millennial women in the second generation scored higher on feeling overwhelmed, crying, and difficulty sleeping, and overall a greater percentage of them had high depressive symptom scores than the earlier generation (25 percent versus 17 percent, respectively).

Furthermore, the study found that of the daughters of the women in the first generation who were depressed during pregnancy, 54 percent experienced depression during pregnancy themselves, versus only 16 percent of women whose mothers were not depressed prenatally, suggesting a genetic link.

So what’s changed for women now that their mothers didn’t experience when they were pregnant? Many societal factors may play a role. The world is constantly becoming more mobile. This can be good a thing when it comes to the flexibility to live in different areas, the freedom to work remotely, and the ability to keep in touch via phone with your friends, family, and basically everyone. But one of the downsides is that women are often moving away from their support systems.

“In my office what I’ve increasingly noticed is that women are isolated. They move to a town for their own or their partner’s career or job and just don’t have the same sort of extended networks of family or friends,” says Katherine Moore, MD, psychiatrist and director of the Perinatal Mood and Anxiety Clinic at the Mayo Clinic.

Financial pressures or feelings of guilt and anxiety about returning to work could also be a contributing factor. “Increasingly among educated women, career choices are harder in some ways,” notes Moore. “A woman might have the opportunity to leave the work force for an extended period of time on maternity leave, and it can be hard to know what the right choice is [to return to work or stay at home]. Going down to one income and access to affordable, quality childcare can be a big stress for women.”

Another possible cause is the pressure of social media. “I wonder about increasing social media use and how it impacts expectant women,” says Moore. “Women are dealing with a desire to portray ourselves and [our] lives in the best light, so we don’t see lots of posts on struggles during pregnancy or postpartum. We see wonderful ultrasound findings and post-delivery pictures. Women may feel like they may not be measuring up or are having more struggles than other women they see on their feeds.”

If you or someone you know is struggling with prenatal depression, know there are effective treatment options available, as well as resources out there such as Seleni.org, a nonprofit organization dedicated to maternal mental health. “Talk to someone. Tell your healthcare provider you’re struggling during [pregnancy] or postpartum. There are multiple effective, evidence-based treatments, including psychotherapy and pharmacotherapy,” says Moore. “No one deserves to struggle alone.”

Did you struggle with depression during pregnancy? Share your story with us @BritandCo.