What to Consider Before Doing a Baby Gender Reveal 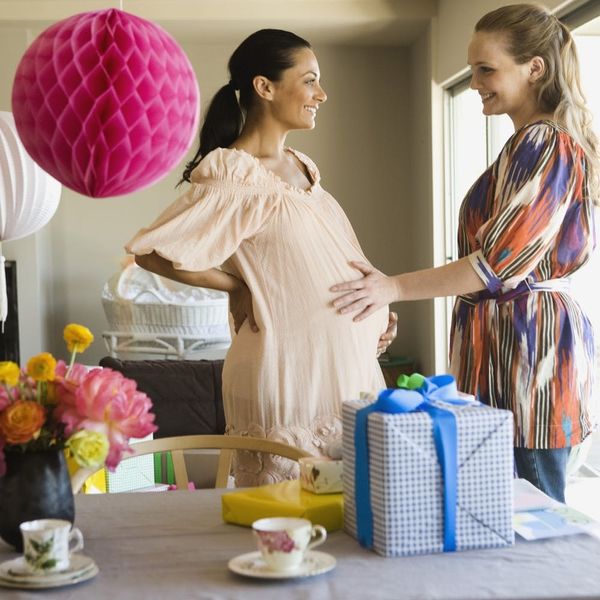 You’ve seen the oh-so-adorable pics all over your friends FB and IG feeds. The photos filled with pink balloons and the shots of piñatas pouring out blue candies. It seems like everyone is making a mega deal of gender reveal moments. But you’re still not sure if that’s for you. Yeah, the reveal itself is super-fun. But, maybe you still want to maintain some mystery when it comes to this whole pregnancy thing. It’s okay to be on the fence! Check out the reasons why you should (or shouldn’t) go for the BIG reveal, below.

1. The thrill of the show is totally “you.” Instead of quietly telling your friends and family that you were pregnant, you made a five-minute long video that you posted on YouTube. You’ve never shied away from a show, and you’re not about to stop now. Your friends call you daring, dramatic, and bold, and the spotlight sets you on fire. Hey mama, take this sense of adventure to the pregnancy level and go ahead with that rad reveal you have planned. This is your time to shine, so go for it!

2. Your registry is blue or pink. Not every parent wants a gendered registry. But some do. You know your baby’s sex and have already picked out a pale pink paint for the walls or a sea blue area rug. When having princess-hued nursery gear (or the opposite) is important to you, a gender reveal might be just right. Not only do you get to make a major announcement, but you’re letting friends and family know if they’ll be buying for a little Miss or Mr.

3. Parties are your thing. Some mamas- and daddies-to-be take gender reveal a step beyond just announcing it. They throw a big bash to share the news with friends and family. If you’re all about having a pink or blue party, a gender reveal is a must. While it’s not exactly keeping the mystery, it is a fun way to share your super-exciting news. It’s kind of like a surprise party, even though the guest of honor is still in your belly.

1. It’s nobody’s business. You’re not secretive. But you also don’t really like sharing what you consider “your business.” Okay, maybe your feelings aren’t that extreme; it’s more like you just like your privacy. You’re not the type of almost mama to post ultrasound pics on FB or share your growing belly on IG. If privacy is your number one priority (or it falls somewhere in the top five), skip the gender reveal, and wait to tell everyone until the baby gets here.

2. You don’t know. Hmm, mystery! You’re all about those little (and major) surprises in life. The happy ones, that is. This is one of the happiest surprises you’ll get to experience. So, when the ultrasound tech asked if you wanted to know the baby’s sex, you said a firm, “No way.” Obviously, if you don’t know the sex, you can’t tell anyone else. But for some couples, one person knows and the other doesn’t. Then what? If only one of you knows the secret, keep things mum. Don’t ruin the surprise for your S.O., and ask them not to spill if you’re the one who doesn’t know.

3. You don’t think gender reveals are a big deal. Parties, fancy cakes with colorful candy hidden inside, crafts, videos, photos, banners, balloons, and all kinds of fanfare — that’s not you. Neither you nor your S.O. enjoys the spotlight. And you don’t feel the need to put yourself out there, at least not in a way that makes your baby’s sex the biggest event of the year. If you don’t see the point in doing any sort of gender reveal, just don’t do it.

Gender reveal, yes or no? Tweet us your pick @BritandCo!

Erica Loop
Erica Loop is a freelance writer living in Pittsburgh. When she's not busy creating kids' activities for her blog Mini Monets and Mommies, you can find her trying to hang out with her teenage son, being chased by her two Olde Boston Bulldogs or teaching a children's karate class (she's a third degree black belt!).
Gender
Pregnancy
Gender Pregnancy