The Surprising Relationship Between Prenatal and Postpartum Mental Health 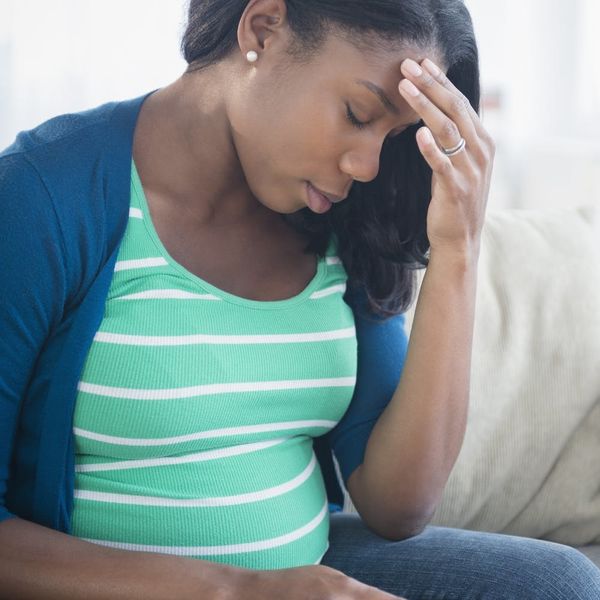 My first pregnancy was a breeze: minimal nausea, little to no pain, and, for the most part, stable emotions. But with my second pregnancy came a pair of brutal, unexpected illnesses. From six weeks on I suffered from all-day nausea and vomiting — medically known as hyperemesis gravidarum — along with debilitating anxiety and depression, all of which seemed to feed into one another. While the physical sickness was certainly miserable, it was bearable because there was a clear antidote (after trying every medicine on the market, I found one that worked well) and a visible end in sight; I knew my physical sickness wouldn’t outlast the pregnancy. But the anxiety could, and given my mental health history, I suspected it likely would.

In the end, I was lucky: My postpartum mood had its fair share of ups and downs, but generally, I experienced quite a bit of emotional relief, likely because I wasn’t sick anymore. The darkness I carried with me through my pregnancy seemed to lift, and though I spent the first six or so weeks of my son’s life waiting for the other shoe to drop, I never faced postpartum anxiety or depression. Interestingly, while my medical providers seemed ill-equipped to help me manage my severe anxiety during pregnancy — I switched clinics midway through in part because I needed more emotional support — I had a number of screenings for both anxiety and depression postpartum, which I was always surprised to pass.

One in seven American mothers experiences symptoms associated with a postpartum mood disorder. Thanks to some much overdue real estate in the news cycle, the tide seems to be changing with regard to how the public understands them. In recent months, celebrity voices like Ivanka Trump, Chrissy Teigen, and Adele have been candid about their postpartum depression, helping to normalize the disorder, which is characterized by a number of depression-like symptoms that most often appear during the first six weeks after birth.

Frank, open discussion on an issue women tend to be quiet about not only destigmatizes PPD; it has also prompted public action, encouraging healthcare providers to be vigilant in preparing and screening new moms for changes in mood. And it turns out vulnerability about mental health begets vulnerability. One mom shared with NPR that celebrities speaking out on postpartum depression gave her the courage she needed to ask for help.

But when I struggled with mental health during pregnancy, I felt anything but courageous. I didn’t hear anyone talking about it in the news, let alone my doctor’s office. Instead, my (literal) cries for help were met with half-hearted suggestions for epsom salt baths and, in the end, an increase in my anxiety medication — but only when I requested it myself. I never got a referral for therapy, which in retrospect would have helped immensely, and no one made an effort to help me understand why I was experiencing anxiety that kept me bed-bound for weeks. I wasn’t prepared for what was ahead of me, and it seemed like my providers weren’t either.

Postpartum mental health is discussed both more publicly and frequently, but some experts say prenatal anxiety and depression are equally common. And, much like postpartum issues, prenatal mental health concerns can manifest in several ways and stem from a number of causes. For example, normal concerns and worries about motherhood can contribute to mood issues during pregnancy, Chicago area counselor Carolyn Wagner tells Brit + Co, but physiological changes are also a major culprit. The cocktail of hormones present in a pregnant woman’s body can contribute to new anxiety, Wagner said, or exacerbate the anxiety a mother was already experiencing. In addition, women who have experienced infertility or previous pregnancy loss are particularly prone to prenatal mood disorders.

Whether mental illness surfaces during or after pregnancy, doctors seem to agree that a preventative approach is the most effective. Psychologist Johanna Kaplan, Director of the Washington Anxiety Center of Capitol Hill in Washington D.C., tells Brit + Co that she recommends talk therapy during pregnancy for both prenatal mood disorders and prevention of postpartum depression, particularly for those with risk factors like pre-pregnancy or postpartum anxiety or depression, a history of abuse, or pregnancy loss. Cognitive-behavioral therapy is especially effective, with success rates of 60 to 90 percent in populations with anxiety and depression.

“Access to this type of treatment can significantly reduce the chances of developing postpartum anxiety/depression and can lead to a less stressful pregnancy and easier, less complicated birth,” Kaplan said.

In addition to talk therapy for women struggling with severe mental health issues during pregnancy — or those who have reason to believe they’re at higher risk for postpartum depression — medication is an option, but it isn’t without risks. “A significant portion of SSRIs, psychotropic medication, are ruled as Class B,C, and D medications, where birth defects can be a side effect,” Kaplan said. “However, if highly monitored, in some circumstances, these risks are worth taking if depression and/or anxiety is severe enough.”

For anxiety as severe as mine, a slight increase in dosage of the medication I was already on before I got pregnant seemed worth the risk — it got me out of bed and back into my normal routine. And though my decision to continue my medication was reactive and not preventative, I still wonder if my decision to up the dose during pregnancy helped emotionally safeguard me once my son was born. Either way, finding the right provider — who, for me, was a really empathetic midwife who was willing to take the time to listen to my concerns — was a key protective factor. And it made all the difference both during and after pregnancy.

If there’s anything I could do differently, I would have been careful not to make assumptions about what my second pregnancy would be like based on my first one. For women like me who have struggled with depression and anxiety before pregnancy, planning for prenatal and postpartum mental health is especially important. Start by finding a provider who takes your mental health just as seriously as you do, and always, always bring up concerns if you don’t feel like yourself. You, your pregnancy, birth, and postpartum, and your baby will be better for it.

Did you struggle with anxiety or depression during your pregnancy? Tell us your story @BritandCo.