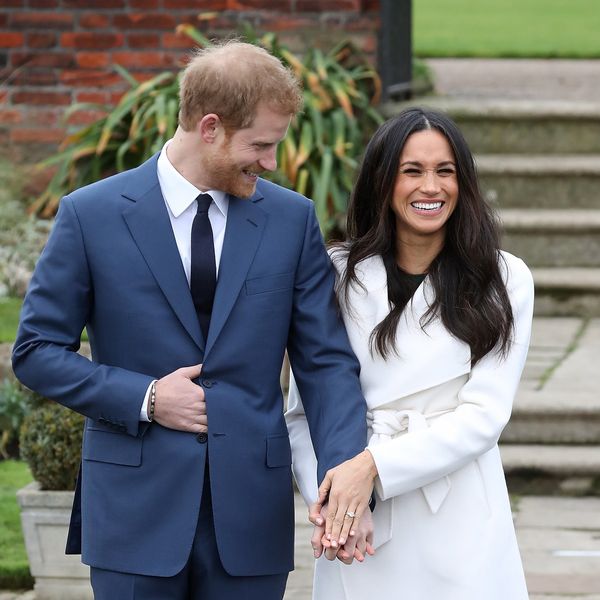 Prince Harry and Meghan Markle have had a busy year since first announcing their engagement to the world on November 27, 2017. They pulled off an extravagant wedding just six months after revealing their plans to wed, and five months after that, they announced that they were expecting their first child. And in between those milestones, Markle dove enthusiastically into her new royal duties alongside her husband. Click through for a timeline of Meghan Markle and Prince Harry's biggest milestones in their first year as a public couple. (Photos via Getty)
First joint interview: On November 27, 2017, the day that Prince Harry and Meghan Markle announced their engagement, the BBC released the couple's first joint interview. It was notable not only because they had previously been very private about their relationship, but also because we learned the adorable, low-key way Harry proposed, among other details. (Photo via Chris Jackson/Getty Images)
First royal engagement: Just days after the engagement news, Markle joined her husband-to-be for their first official royal engagement, appearing at the Terrence Higgins Trust World AIDS Day charity fair. Markle had been active in charitable work throughout her acting career and expressed her eagerness to start contributing on a bigger scale with the royal family. (Photo via Chris Jackson/Getty Images)
First Christmas with the royal family: In a break with tradition, Markle joined the royal family for their Christmas morning church service at their longtime place of worship in Norfolk. Generally speaking, significant others don't partake in the royals' annual Christmas festivities until they marry into the family. (Photo via Chris Jackson/Getty Images)
First official appearance with Prince William and Duchess Kate Middleton: In February 2018, Prince William, Kate Middleton, Prince Harry, and Meghan Markle teamed up for their first official joint engagement, appearing at the first annual Royal Foundation Forum in London to showcase some of the programs their charitable foundation has launched. (Photo via Chris Jackson/WPA Pool/Getty Images)
The royal wedding: The main event! Just six months after announcing their engagement, the couple officially tied the knot on Saturday, May 19, 2018. Markle's elegant gown, designed by Givenchy artistic director Clare Waight Keller, was instantly iconic — as was Harry's reaction to seeing his bride walk down the aisle. (Photo via Ben Stansall/WPA Pool/Getty Images)
First post-wedding appearance: On Tuesday, May 22, three days following their nuptials, the newlyweds made their first official appearance as the Duke and Duchess of Sussex at a Buckingham Palace event celebrating Prince Charles in advance of his 70th birthday. (Photo via Chris Jackson/Getty Images)
First balcony appearance with the royal family: Duchess Meghan made her debut on the balcony of Buckingham Palace on June 9, 2018, when she joined Princess Anne, Princess Beatrice, Lady Louise WIndsor, Prince Andrew, Queen Elizabeth II, Prince Charles, Prince Harry, Duchess Kate, Prince William, Princess Charlotte, Prince George, Savannah Phillips, and Isla Phillips for the annual Trooping the Colour ceremony. (Photo via Chris Jackson/Getty Images)
First royal christening: It was a busy spring for the royal family. Not only did Prince Harry and Duchess Meghan tie the knot, but one month prior, Duchess Kate Middleton gave birth to her third child. Prince Louis' christening was held on July 9, making it the first family christening attended by the newlyweds. (Photo via Dominic Lipinski/WPA Pool/Getty Images)
First official foreign visit: Just one day after joining the royal family for Prince Louis' christening, Prince Harry and Duchess Meghan jetted off for their first official foreign visit as husband and wife. The couple appeared in Dublin, Ireland, where they "learned more about Ireland's history and [spent time] experiencing its rich culture, as well as meeting the people who are shaping the country's future." (Photo via Charles McQuillan/Getty Images)
Meghan Markle's first solo Royal Foundation initiative: On September 25, 2018, Markle released a cookbook in collaboration with women affected by the Grenfell Tower fire in London. The women had been meeting at the Hubb Community Kitchen twice a week to make food to bring back to their hotel rooms, and the cookbook is a tribute to both the meals they made and the bonds they formed. Proceeds from the book will go toward making the kitchen accessible seven days a week. Markle still visits the kitchen, stopping by as recently as November 21. (Photo via Ben Stansall/WPA Pool/Getty Images)
First royal tour: In October, the Duke and Duchess of Sussex embarked on an ambitious, 16-date tour to Australia, Fiji, the Kingdom of Tonga, and New Zealand. We already wrote a lot about that, so go here to see all the many, many highlights. (Photo via Dominic Lipinski/Pool/Getty Images)
A royal pregnancy: On the eve of their first royal tour — and five months after their wedding — Prince Harry and Duchess Meghan announced that they're expecting their first child in the spring of 2019. (Photo via Chris Hyde/Getty Images)
Allison Takeda
Royal Baby
Pop Culture
Royal Baby Royal Family Royal Wedding
More From Pop Culture