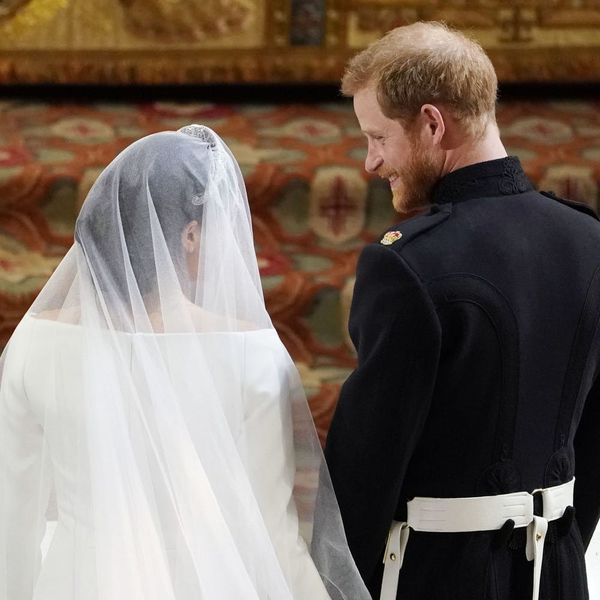 Find someone who looks at you the way Prince Harry looked at Meghan Markle during the royal wedding. On Saturday, May 19, upon seeing his bride enter St. George’s Chapel at Windsor Castle, Harry grew visibly emotional as he waited at the end of the aisle.

The Bride moves in procession through the Nave where she is joined by The Prince of Wales #RoyalWedding pic.twitter.com/d9HrWsMjRt

The former Suits star walked into the church alone before her now-father-in-law, Prince Charles, joined her at the nave. She and Harry never took their eyes off of each other, and both appeared to tear up as they grew closer.

When Markle — now the Duchess of Sussex — reached the altar, they shared a few words and a laugh before the ceremony began. The audio didn’t pick up their conversation, but according to Buzzfeed, Harry told her, “You look amazing,” and “I’m so lucky.” Swoon.

The two held hands throughout much of the ceremony and frequently stole little glances at each other between hymns and readings. When Harry lifted her veil, the way they looked at each other confirmed that this is a royal romance to remember.

The now-newlyweds spent the day before their wedding apart, with Markle and her mom, Doria Ragland, at the Cliveden House Hotel, and Harry and his brother, Prince William, at the Coworth Park Hotel. The princes arrived together on Saturday morning, both in hand-cut and sewn frockcoat uniforms of the Blues and Royals.

What was your reaction to seeing Meghan Markle at the royal wedding? Let us know @BritandCo!