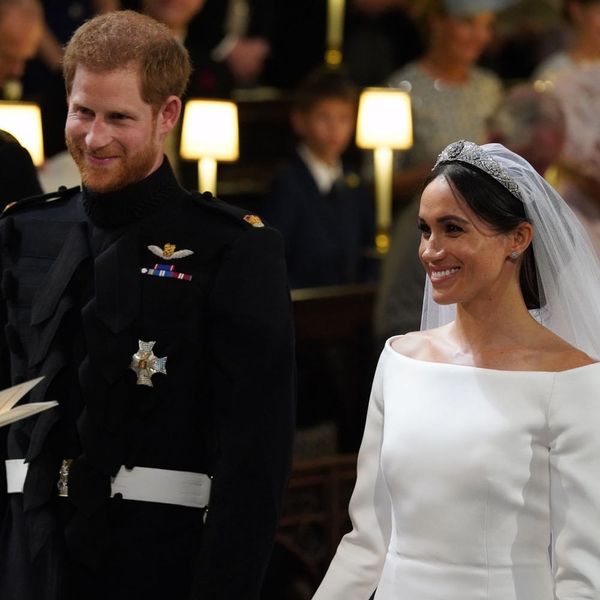 Prince Harry and Meghan Markle are officially husband and wife! After months of anticipation and build-up, the couple exchanged vows in a royal wedding at St. George’s Chapel at Windsor Castle on Saturday, May 19 — and it was everything we hoped it would be and more.

Markle, who is now the Duchess of Sussex, looked resplendent in an elegant gown by Givenchy artistic director Clare Waight Keller. As planned, Prince Charles walked her down the aisle to where a visibly emotional Prince Harry waited with his brother and best man, Prince William.

After an initial welcome and the singing of the first hymn, the Archbishop of Canterbury, Justin Welby, began the declarations:

“Harry, will you take Meghan to be your wife? Will you love her, comfort her, honor and protect her, and forsaking all others, be faithful to her, as long as you both shall live?”

“Meghan, will you take Harry to be your husband? Will you love him, comfort him, honor and protect him, and forsaking all others, be faithful to him, as long as you both shall live?”

Lady Jane Fellowes then performed a reading from the Song of Solomon, which was followed by the address, given by the Most Reverend Michael Curry, and a performance of “Stand By Me” by Karen Gibson and the Kingdom Choir.

After the performance, the couple exchanged both vows and rings, again repeating after the Archbishop.

“I Harry, take you, Meghan, to be my wife, to have and to hold from this day forward; for better, for worse, for richer, for poorer, in sickness and in health, to love and to cherish, till death us do part; according to God’s holy law. In the presence of God I make this vow.”

“I Meghan, take you, Harry, to be my husband, to have and to hold , from this day forward; for better, for worse, for richer, for poorer, in sickness and in health, to love and to cherish, till death us do part; according to God’s holy law. In the presence of God I make this vow.”

With the giving of the rings, their union became official. “In the presence of God, and before this congregation, Harry and Meghan have given their consent and made their marriage vows to each other,” the Archbishop announced to the congregation. “They have declared their marriage by the joining of hands and by the giving and receiving of rings. I therefore proclaim that they are husband and wife.”