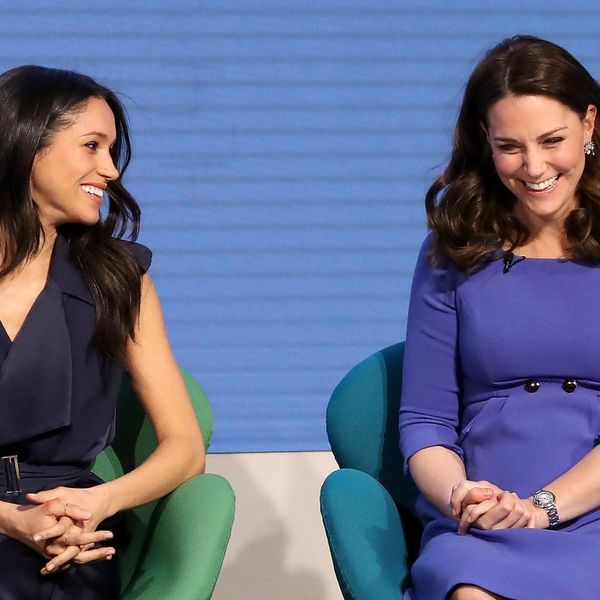 They’re certainly no strangers to making publicappearances, but the royals’ most recent outing was a major milestone: Prince William, Kate Middleton, Prince Harry, and Meghan Markle teamed up for their first official joint engagement together, even smiling and laughing about the unique family bond they share.

The two couples appeared at the first annual Royal Foundation Forum in London to not only showcase some of the programs the Foundation has launched, such as the Invictus Games, Heads Together, and United For Wildlife, but to also share their collective vision for the future of the Foundation.

The charitable body was first started in 2009 by William and Harry as a means of pursuing social change and causes important to them. Middleton joined in 2011, and today was Markle’s first event with the Foundation. William made a point of welcoming his sister-in-law-to-be in his opening address, according to People, saying they were “particularly happy” that it was the first Royal Foundation event with Markle, who will officially become a patron following her May 19 wedding to Harry.

Middleton spoke about the Foundation’s plans to support mental health initiatives for children and adults, and Markle said she was excited to “hit the ground running” with the organization to support women’s rights. “Women don’t need to find their voices, they need to be empowered to use it and people need to be urged to listen,” Markle said.

The Royal Foundation Forum is the first time the four young royals have been pictured together since Christmas. In between sharing their plans for the future, they even playfully joked about the family dynamic that comes into play while doing business. “Working as family does have its challenges, of course it does,” Harry said as the crowd laughed. “[I think] the fact that everybody is laughing shows they know exactly what it’s like. But we are stuck together for the rest of our lives.”

Markle didn’t waste any time completing her fiancé’s thought with the perfect punchline: “Togetherness at its finest.”

What did you think of the royals’ first official appearance together? Let us know @BritandCo!